Auckland, July 5, 2020: On July 4, during the passing out parade for new inductees into in the New Zealand army, a unique sight was witnessed.

Among the 63 new soldiers, what caught everyone’s attention was a 23-year-old white man wearing a green turban and smartly turned out with a light brown beard.

The name of this young white man is Louis Singh Khalsa, who is a baptised Sikh. His English name is Louis Talbot.

This is an amazing story of white boy who partook amrit at Takht Sri Kesgarh Sahib and then went on to join the New Zealand Army.

He spoke to this reporter in Punjabi and the first question put to him was how come he adopted Sikhism so perfectly in just 5 years when it takes many people a lifetime.

Khalsa said he belongs to Timaru, a town in Canterbury, and completed his college education at Christ College, Christchurch.

“In 2015, I met a Sikh boy named Tejinder Singh at a friend’s house. I asked him about Sikhism and he told me to visit Gurdwara Jagat Guru Nanak Sahib in Christchurch. When I went there I felt a different kind of calm,” Khalsa said.

He then started visiting the gurdwara every week where he met Sukhpreet Singh, Kamal Singh, Dilraj Singh, Kanwaljit Singh and Rajwinder Singh who inspired him to follow the Sikh way of life.

In June 2018, Khalsa went to Punjab and lived with a Sikh family and was baptized at Sri Kesgarh Sahib, Anandpur Sahib. 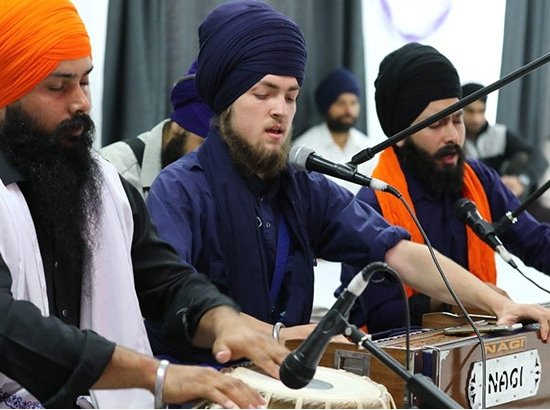 He started learning Gurmukhi and reciting bani and then he visited Darbar Sahib where he practised Punjabi by reading signboards on the streets. Later, when he returned to New Zealand he learned to play tabla and kirtan.

Khalsa’s mother is from England while his father is from New Zealand. He has an older brother and a younger sister.

‘Sikhs in Continental Europe’ by Swarn Singh Kahlon is an enticing collage of stories showing the capability and capacity to struggle for survival before making it big in the dream destination.

The canvas of life in the book is splattered with stories of travails of Sikhs from Punjab who landed in different countries searching for an identity. The chapters are filled with torrid experiences that majority of the new entrants faced while performing menial jobs and living in makeshift shelters.

He has visited as many as 80 countries on 24 passports for his books.

Kahlon’s travelogue is based on oral accounts, documents and newspaper clippings. The valuable part is the first-person narrative by Sikh migrants. Also featured are peculiar tales of unscrupulous agents, police arrests, deportation and police raids.

The book also has success stories like that of Dr Avtar (Billa) Singh Seth, who started as a barman in Austria in 1955. Choosing to pursue his studies in medical science, he was honoured by the President after his retirement in 2004. Rachpal Singh Kalsi, who came to Europe on a shoe-string budget in 1970, was conferred the Knighthood of Danneborg by the Queen of Denmark in 2006. We also have stories of certain strugglers who failed to find a home.

Gurdwaras are the biggest anchors for the Sikh population as well as the newcomers. The nations in continental Europe have approximately 140 gurdwaras.

From searching a place to call home to flipping burgers, Afghan-born Awnit Singh Marta has been through quite a bit in life.

And now he has hit another milestone for himself and his family. The first generation student from his family has just graduated from Harvard University.

In an update on his Facebook page, the electrical engineering graduate writes:

“My parents left Afghanistan when I was less than a month old, seeking refuge in The Netherlands. They moved from one country to another to another so that their children could get the education they never received.

I am a Sikh. I am an Afghan. I am a refugee. I am a first gen student.

And from today, I am a graduate of Harvard.”

The news comes at a time when Sikhs in Afghanistan are faced with peril. In March, gunmen stormed a gurdwara in Kabul and killed 26 people. The incident was yet another attack on the minority community. The incident also sparked efforts to get the Afghan Sikhs out of Afghanistan as their lives were at stake.

Awnit is not ordinary student. As he writes, his parents left Afghanistan when he just a month old. They fled Afghanistan for the Netherlands, where they lived for eight years until they moved to England.

At Harvard, Awnit did not sit idle, too. He was active in the US university’s bhangra team which he helped to revitalise.

When he first joined Harvard Bhangra, the group was struggling — a low participation rate combined with inadequate leadership. Marta stepped in as a sophomore and helped to create a board for Bhangra, hoping that, with more structure, the group would survive and grow, reports The Harvard Crimpson. That’s not all. The magazine also reported that he had resurrected the Harvard British Club and assumed the role of Prime Minister.