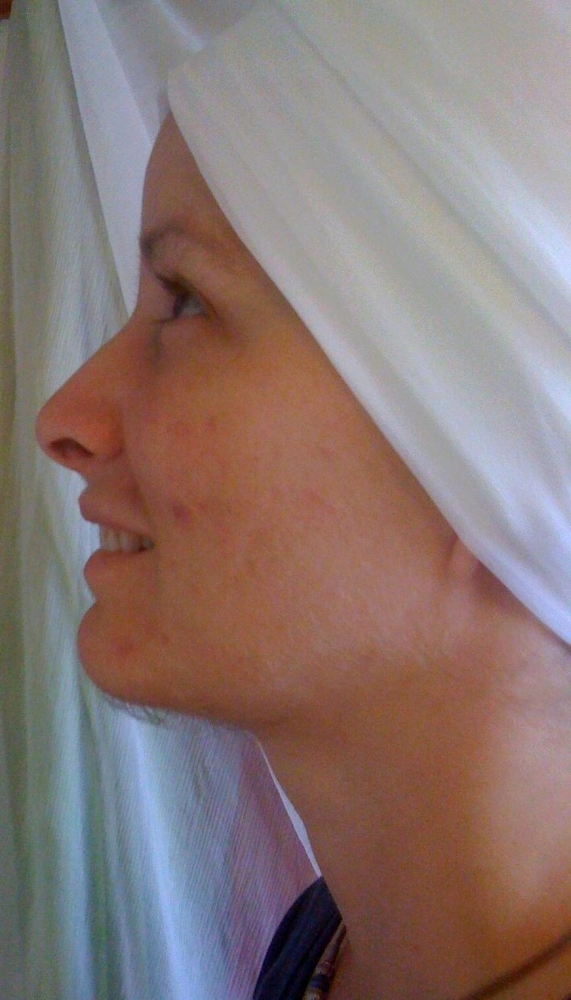 It has been a rough weekend. I have spent the past days tormented while my ego wrestled with itself, turning my emotions black and blue. Sometimes I dread time off from work because I know that is time for me to confront the darkness that is hiding inside this mostly peaceful mind.

I have some very uncomfortable thoughts I have to share with you today. I say I have to do it because that’s the way it is for me. When this struggle entered my mind as one I would likely have to relate at one time, a watermelon that had been sitting quietly for a day fell off the refrigerator onto the floor. Subtle signs can be rationalized. Watermelons taking flight are now a little harder for me to ignore. I have to warn you this is a candid piece about hair and gender and defining one’s identity.

Hair is a huge part of Sikhi and for women, in the U.S. at least, this is a sensitive topic. There is this idea that women should not have facial hair like mustaches or beards. I have searched books and the internet for any advice from Sikh women who have struggled with hair growth on their face but have only found writing from those blessed souls who either totally accept their hair or those who have removed it, even if it meant breaking their Amrit vows. You see, hair has become a mental torment for me during the last year. I am one of those women who grow a lot of hair, most perplexingly on my chin. I know this is very common, despite the appearance of women on the street or lack of medical evidence to support it. For one thing, women talk about removing facial hair and there are tons of cosmetic products designed specifically for this purpose. I have also worked in women’s health for several years and now find myself in an endocrinology practice, both places where women express a lot of anguish about what they deem excessive hair growth. There are definite hormonal conditions that affect hair and also genetic predispositions to this but what is unclear to me is whether more women are now growing hair in what is termed “male patterns,” or whether I have just become more aware of it. What first made it undesirable and why do we believe it is a disorder?

The technology of hair I have learned from the yogic perspective is gender specific. Men grow a beard on their chin to protect their moon center, women don’t need it. So are even the yogis telling me I am abnormal? Mostly I find them not speaking to this topic as it affects women at all. I tried every rationalization I could to justify removing my own facial hair, searched endlessly for support and even found some that was reasonable from a scientific standpoint.  It was still not sitting right with me.

Then I tried to convince myself that it might be some evolutionary development in response to environmental stresses. If we haven’t always had it, maybe we now do need this hair on our faces.  Whatever the case, I still was not buying it. I utterly despised everything about those hairs. When I finally accepted that it was time to ask for Amrit the Guru kept showing me women and girls from all walks of life with hair on their face. Each one I saw made me recognize that I did not see the hair as detracting from the beauty of their presence. It did not mar their grace or affect whether or not they had a mate.

Despite this understanding, I have struggled. I have cried to the Guru and prayed to have the hair taken away.  Even a miracle wasn’t too far-fetched for this mind to entertain. I knew that by taking Amrit and marrying the Guru I would gain the strength to at least face this mental challenge. There is no way I could dishonor the vows to my Guru or the trust of the Panj Piare.

More realistically, I am just too stubborn to lose this conflict. Even after receiving the Guru’s Amrit, I found I have continued to waste time and energy resisting the idea of hair on my face, so much so, that it has made me angry.  I realize that my concern has been so superficial and vain, so controlled by society’s false image and that I felt completely weak.  I have great pride in my physical and mental strength and those stupid little hairs were bringing me to my knees.

So why are they so disconcerting? Do they make me less of a woman? What does that even mean? We know from psychology that there is more diversity within the gender spectrum than between the genders. In medicine, it is the rare case that follows the textbook and normal is a range. Women come in many uniquely beautiful forms with a variety of gifts, aptitudes and strengths. I am finding that these happily curling hairs, oblivious to my despair, are forcing me to confront the very essence of not just what it means to be a woman or a Sikh, but what it means to be me.

I am living in South Dakota, the middle of rural America, where I don’t expect to see another Sikh. This is Lakota country, beautiful, vast and sometimes rough. There is a spiritual tradition in the Native American Lakota culture called a vision quest, and it is still practiced here.  I have been to some of the sacred sites and sometimes think that just such a quest is part of the reason that I am here as the lone Sikh. Days like the past few are exhausting but having only myself to contend with makes painful growth a possibility.

Today after a hukam and a hug from Guru Amar Das, I strolled in a sunny park slowly walking my way back to a state of peace. Sitting on a tree stump beside a large shallow pond, I received a poke in the side from a Lakota toddler who wanted to show me the sticks he’d collected. He didn’t find me the least bit odd. This hair has been just another tool the Guru has presented me to separate myself from illusion and grow closer to the Infinite. Pride changed to devotion, stubbornness to resolve. Tonight the Guru and I stayed up late sharing a juicy, ripe watermelon and having a laugh at my expense. I cannot promise this fight is over, but at least for tonight the soul has won.

You can read Part 2 of this story at: How My Hairs are Teaching Me – Part 2