“I was part of this generation of Sikh advocates who had this frame that if the nation only knew who we were, then it would be enough, then it would stop this tide of hate,” Valarie Kaur tells Observer on a phone call, not trying to hide the pain in her voice. “But knowing is not enough. We have to be agents of revolutionary love.”

Kaur’s new memoir, See No Stranger, is an account of her effort to learn, teach, and live that ethic. Her family’s story in America, she writes, starts with her paternal grandfather, Kehar Singh, or Bab Ji, who came to the United States in 1913 and was immediately imprisoned in line with the country’s racist immigration policies. A white immigration attorney, Henry Marshall, filed a writ of habeas corpus on his behalf and he was released. He became a farmer in California’s central valley, where her family has lived since. If Marshall had seen her grandfather as a stranger, Kaur writes, she would not have even been born.

Growing up “one hundred years after Baba Ji made America home,” Kaur writes, “I thought that all of our hardest battles were behind us.” But 9/11 disabused her of that notion. Following the terrorist attacks on New York and Washington D.C., hate crimes and assaults on Sikh people skyrocketed.

Balbir Singh Sodhi, a gas station owner who was a friend of Kaur’s family, was the first person murdered in a hate crime after the attacks. Kaur began criss-crossing the country to interview and film Sikh survivors of hate for the documentary film Divided We Fall: Americans in the Aftermath. “We built our organizations, we developed our media strategies, and we launched campaigns all around this idea that people needed to know the basic tenets of the Sikh faith and needed to know that we’ve been victims,” she told me.

The hope that education might be enough ended for Kaur in 2012, when a shooter killed six people at a Sikh temple in Oak Creek Wisconsin. Most people have not even heard of the Oak Creek shooting; “It disappeared from the nation’s conscience almost as soon as it occurred,” Kaur writes. But Kaur tells the story of the victims and their families, who she knows personally, and of their grief and faith. She also recounts how the Sikhs included the shooter, who killed himself, in their service for the dead.

Revolutionary love is about loving others. But it’s also, Kaur says, about loving one’s enemies. Kaur writes that her maternal grandfather, Papa Ji, explained the Sikh tradition of warrior love. “Love is dangerous business…If you see no stranger, then you must love people, even when they do not love you. You must wonder about them even when they refuse to wonder about you.” The battle is hardest because it is not just waged against one’s enemies, but for them. Kaur talks in the book about how she has worked to understand and love a police officer who badly and deliberately injured her arm in a protest, and a cousin who threatened her with a gun. 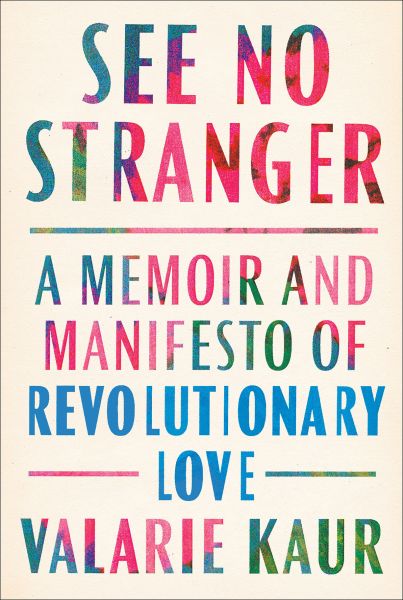 See No Stranger by Valarie Kaur One World

“I’ve learned that there’s no such thing as monsters in this world,” she reflects during our conversation. “They’re only people who are wounded who are acting out of their own insecurity or their blindness or their ignorance. And once we get curious about them, even then, we begin to gather the information we need in order to change the conditions that radicalized them. Loving our opponents is not just a moral call. It’s pragmatic, it is strategic. It is how we learn to fight in ways that don’t just resist bad actors or remove bad actors from power, but actually change the systems, institutions, and cultures in which they operate.”

Kaur’s call to return love when met with hatred will provoke resistance, she knows. But she says that in her own life, loving the policeman who hurt her has been easier than loving herself. Perhaps the most painful parts of the book are the discussion of her emotionally abusive relationship with her ex-fianceé, and her maternal grandfather’s rejection of her relationship with her non-Sikh husband. Though he taught her to see no one as a stranger, he had trouble loving and accepting the choices of his own granddaughter. And she had to give herself permission to believe that he was wrong.

“I think our bodies carry information for what we are ready for, now. So, when I think of certain opponents, if I feel that my body is activated and flushed with rage or flushed with grief, then I know that my job right now is to attend to my own wounds,” she told me. When someone is harming you, she said, it’s not your obligation “to try to wonder about them and try to love them. Your job is your own survival and your own flourishing.”

Part of loving oneself is allowing oneself to feel anger when others harm you, Kaur says. The opposite of love is not anger, but indifference, and though she’s soft-spoken, there is a good deal of rage in her book. “Especially as a woman of color, I was always taught to be ashamed of my rage, to suppress it down inside of me,” she told me “And it took me a long journey, as you read, to understand that my rage carried information, that it showed me that my body and my life were worth protecting, that I had something worth fighting for.”

Anger and love are both hard to sustain over two decades, and Kaur admits that the last four years, the pandemic, and ongoing violence have been very difficult for someone who has been advocating for marginalized people since the Bush administration. “I ask every day now, is this darkness in our country the darkness of the tomb or the darkness of the womb? There’s so much cruelty and incompetence in our leadership, it feels like death has won.”

But she adds that she’s seen “glimpses of the nation that longs to be born.” Black Lives Matter marches or the activists that clogged airports to protest Trump’s Muslim ban have given her hope. Along with warrior metaphors of rage and battle, she says she returns to metaphors of labor and birth, and a belief that something new and better can come out of the current pain and despair. “How do we show up to the fire and still breathe and push and breathe and push?” she asks, and answers without pausing. “It’s true love.

Singh, who spent 17 years at USask, including as associate dean of research for USask’s Western College of Veterinary Medicine from 2011 to 2016, is currently dean of veterinary medicine at the University of Calgary. He will succeed Karen Chad who has served as USask vice-president research since 2008, and who has agreed to stay on in the role until Jan. 31, 2021.

“I am thrilled that Baljit will be returning to our campus to assume this critical role for our university and province in driving outstanding research and innovation as one of Canada’s top 15 research universities,” said Stoicheff.

“Well known across campus for his collaborative, passionate and inspiring approach, he brings to the role a wealth of research and leadership experience and expertise that will guide our strategic research, scholarly and artistic work endeavours as we continue to be the university the world needs.”

Singh’s research has focused on cell and molecular biology of lung inflammation, work for which he has been awarded nearly $11 million in funding since 1999. A fellow of the American Association of Anatomists, he has received the Outstanding Veterinary Anatomist Award from the American Association of Veterinary Anatomists, as well as the Pfizer Award for Research Excellence. He is a fellow of the Canadian Academy of Health Sciences, one of the highest honours for health research and teaching in Canada.

At USask, Singh led an NSERC-CREATE “One Health” research program into food safety, infectious disease control, and public policy, training students from more than 20 universities in Canada and other countries, and building international collaborations. He is the author or co-author of more than 100 peer-reviewed journal articles and books, and has supervised the research training of nearly 90 undergraduate, graduate and post-doctoral students.

“The story of my academic work and personal life is deeply linked to Saskatchewan, so I am truly honoured to be appointed to the role of vice-president research and grateful for this opportunity to return to the University of Saskatchewan,” Singh said.

“This university provided me with excellent opportunities for growth as an academic and a leader. Working with colleagues across campus, these opportunities included interactions with outstanding mentors, engagement with integrated planning, execution of large research and teaching projects, and participation in development of some of the most advanced research infrastructure of any Canadian university. This infrastructure and cadre of leading researchers and thinkers at USask are delivering the knowledge that the world needs to address complex social, environmental and biomedical issues, and I look forward to helping to further their work.”

He added, “Sensitivity of the university to the needs and aspirations of marginalized communities locally and globally has deeply influenced me and my work. I am deeply committed to the process of Indigenization and advancing education and research through collaboration with Indigenous scholars and communities.”

MESA, AZ — Four days after the terror attacks on September 11, a murder fueled by hate shook the Valley.

September 15 marks 18 years since Rana Singh Sodhi’s brother Balbir was shot and killed outside the Mesa gas station he owned.

Authorities say Balbir, a member of the Sikh community, was targeted because he was wearing a turban.

Sodhi has now dedicated his life to teaching others about acceptance. “Our new generation needs to understand and build respect, that the way I think about it,” Sodhi said.

A few years ago, Sodhi says he spoke with his brother’s killer, Frank Roque, over the phone while he was in prison. He says Roque showed remorse for what he did.

“He wants to see my brother and hug him and say sorry to him” Sodhi said.

Sodhi says he will continue spreading a message of love in honor of his brother, for as long as he lives.

“If one person can change, I’ve made it my life mission,” Sodhi said. “I’m not going to stop.”