Under Colorado Coronavirus Restrictions, Sikhs Change How They Help Those In Need


KP Singh with Denver’s Sikh Gurudwara is spending much of his time at home with a headset on. He speaks on the phone with people who are searching for things like groceries and other goods.

“Some people (need) medical equipment,” he said. “Some lady actually called us that she had to go to a food bank so we had to arrange an Uber drive for her.”

Normally the Gurudwara, a Sikh house of worship, has a community kitchen. Once a week they cook and make a big meal they serve to anyone who comes, not just Sikhs. It’s called the Langar and it’s one way Singh likes to give back to the less fortunate.

But they can’t do that anymore. The new coronavirus has caused widespread closures, forcing all religions, including Sikhs, to re-think their traditions.

“Now the question becomes how do you take care of community in a world where you can’t go out to meet with community because of pandemic response?” said Dilpreet Jammu, president of the nonprofit Colorado Sikhs.

In the age of social distancing, Colorado Sikhs have reinvented the idea of the Langar and can now provide people nutritious food more than just once a week.

Singh has led the initiative from his home office. People have called to ask for all sorts of things. He has coordinated Amazon and King Soopers’ orders and has even found transportation for people.

“Now it is anything. I mean as simple as toilet paper,” Singh said. He added that he gets about five requests a day. Sometimes they’re from people who need emotional support and just want to hear another voice.

“One example, in the beginning, the lady said, ‘I am not asking for anything financially so don’t worry, but I do want to talk about this whole thing that you are doing.’ And she went on and on and on and on. So it’s OK, right? That is another thing I could help.”

Even though some of the requests are complicated, Singh doesn’t mind because he enjoys helping others. He said sharing is one of the principles of Sikhism.

“Another thing that helps our community is a phrase called a chardi kala. And that translates to always rising, always uplifting,” said Jammu, with Colorado Sikhs. “So not only uplifting your own spirits but uplifting the spirits of others around you.”

Colorado Sikhs are helping uplift their community in states like Kansas, too, where they hope to replicate this new approach to Langar and shared meals.

Sikh men don the turban for symbolic and cultural purposes, and this is a rather common sight in multi-cultural Singapore.

However, on Monday (20 Jul), Mr Parvitar Singh took to Facebook to share a rather unpleasant experience while applying for a job.

While Mr Singh was identified as a potential candidate, an employee from the company allegedly implied over the phone that his turban might be an issue. You can read the Facebook post in full here. 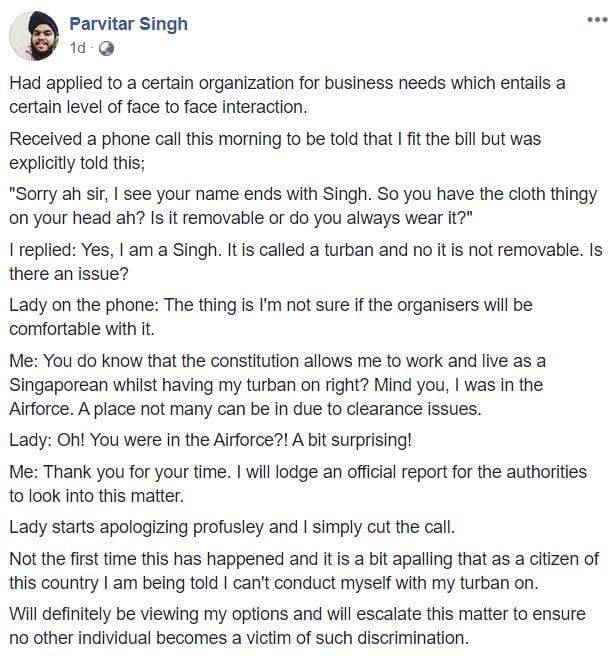 The company is apparently investigating the matter.

In his post, Mr Singh recounted applying for a job that required “a certain level of face to face interaction”. 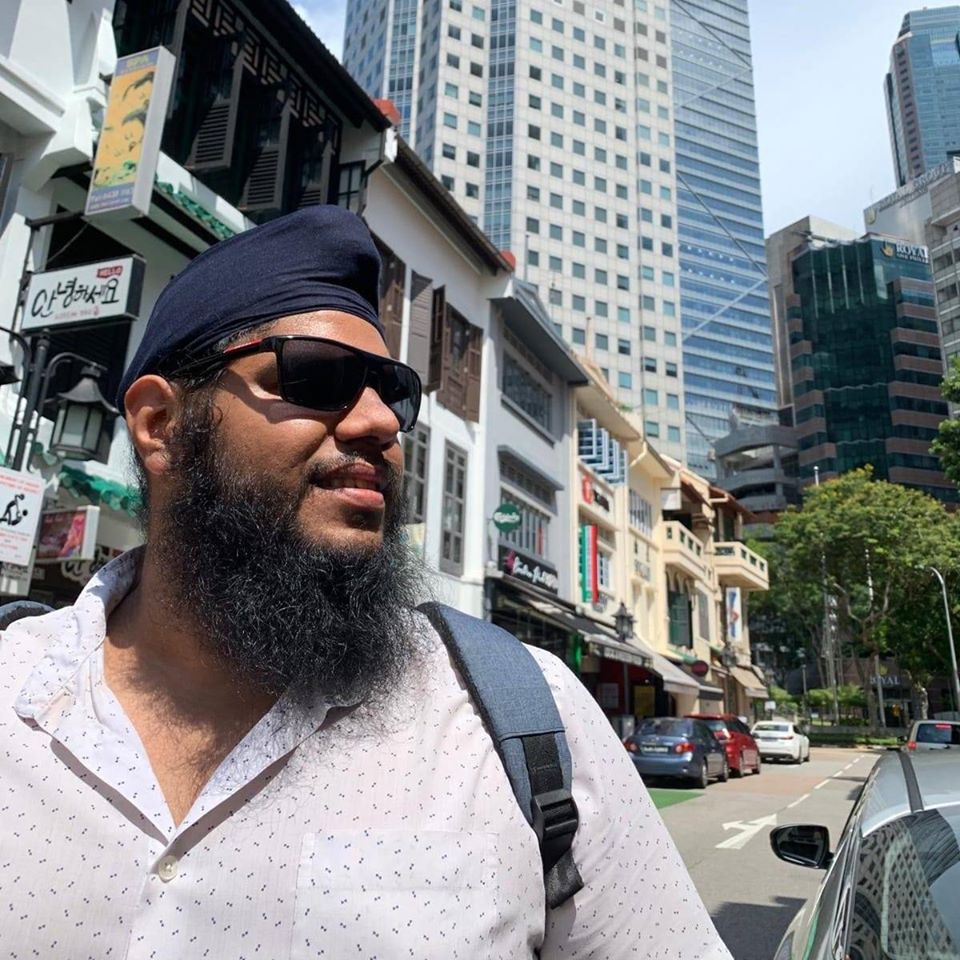 On Monday (20 Jul) morning, he allegedly got a call from the company informing him of an issue.

While he was apparently a good fit, a lady from the company asked if he wore “the cloth thingy” on his head, and if it’s removable.

Mr Singh answered that his turban is not removable.

The lady over the phone did not acknowledge if she was referring to the turban, but responded by saying that she’s sceptical about whether “the organiser will be comfortable with it”.

Presumably shocked by the comment, Mr Singh reminded the lady that he and others from the Sikh community are allowed to work and live in Singapore while donning turbans.

He went on informing the lady that he was previously from the Singapore Air Force, which he claims has rather strict clearances.

He then proceeded to thank the lady and told her that he’d be lodging an official report.

Later that night, Mr Singh provided an update on his Facebook page, sharing that the company is currently investigating the case.

He added that he will not be revealing the names of the staff and company as he does not want to cause further “implications”.

Mr Singh ended the post by thanking everyone who had provided support and urged them to be mindful of their words.

Donning turban should not affect chances of landing a job

The turban is a symbol of a Sikh man’s pride, and should be treated with respect.

At the end of the day, donning a turban in no way affect the wearer’s ability to work, and hence should not be a factor that determines if an applicant lands a job or not.

We hope the company would conduct a thorough review of the case and take the necessary steps to prevent further occurrences like this moving forward.

The office of state Sen. Manka Dhingra of Washington state announced that Dhingra and fellow state Sen. Mona Das were among legislators in the Pacific Northwest state that passed a resolution honoring Sikh Americans.

The resolution honors the contributions of Sikh Americans to Washington state’s culture, economy and government, a news release said.

Legislators in the state brought to the capitol many representatives of Washington’s Sikh American community, which has deep roots in Washington state reaching back to 1899, the release said.

“This resolution was about honoring and celebrating everything that our Sikh friends, family, and neighbors have done for our state and our country,” the statement said.

“I hope that they felt recognized and appreciated today. Our wonderful state of Washington wouldn’t be the same without Sikh Americans’ dedication to our communities and their commitment to reconciliation and kindness,” Das said. “They demonstrate what close-knit family and friendship should be, and I am so glad we could celebrate one another with such a joyful reception and resolution.”

The invocation was given by Giyani Sadhu Singh of Gurudwara Singh Sabha in Renton, and translated by Amarjit Singh, the release noted.

Members of several other Sikh temples were in attendance, including Guru Tegh Bahadur Gurudwara of Kent, Sacha Marg Gurudwara of Auburn, Sikh Center of Seattle and Bothell, and Khalsa Gurmat Center, it said.