It was more than a decade ago. But Indian-American entrepreneur Gurinder Singh Khalsa remembers the details vividly. He was flying from Buffalo to Sacramento. He had cleared security, yet he was asked to take off his turban. 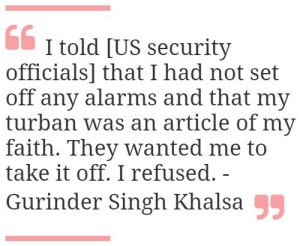 “I was told under the new TSA [transportation security administration] guidelines that any headgear has to be removed,’’ says Khalsa over the phone from the US. “I told them that I had not set off any alarms and that my turban was an article of my faith. They wanted me to take it off. I refused.”

I told [US security officials] that I had not set off any alarms and that my turban was an article of my faith. They wanted me to take it off. I refused.

Khalsa instead drove across the border to Toronto, where he met a friend who had his own television channel. On live TV, Khalsa realised that he was not alone; other people had similar experiences. “There were senior Sikhs who had no choice,” he says. “They had to go for a funeral and had no choice but to board. They were literally in tears, saying that they were forced to take off their turban and put it in the same box as they put shoes and go through security.”

Determined to fight for the right to wear a turban, Khalsa came back, contacted his Congressman and senator and launched a campaign. “I was told that we needed to start a petition with 20,000 to 25,000 signatures,’’ he says. Standing outside malls, he urged people to sign and garnered over 67,000 signatures. “A majority of people are kind-hearted. They asked what is this for,” says Khalsa. “[I told them] I am not asking for Sikh turbans or my turban, I am standing for faith and religious liberty. Everyone wants that.”

In 2007, the US Congress, with the signatures, got the Department of Homeland Security to make a change to the rule. “Even [former US president] Barack Obama signed the petition; he was a senator then. Since then, under the new policy guidelines, you cannot even touch our turban. We can touch the turban and they swab our hands, and we can get cleared,’’ says Khalsa, with a hint of pride. The swab is then tested for residue and if found to be fine, the person is allowed to walk through. This year, Khalsa was awarded the Rosa Parks Trailblazer award.

Khalsa’s story is not unique nor is his struggle. Last year, Navdeep Singh Bains, Canada’s minister of innovation, science and economic development, was asked to remove his turban at a US airport. He was finally allowed to fly after he produced his diplomatic passport.

Over the years, Sikhs have fought for the right to keep their religious identity intact. In 2018, Gursoach Kaur became the first turbaned Sikh woman in the New York Police Department. “In the 1950s and the 1960s, there were the voucher migrations,’’ says Mejindarpal Kaur, international legal head, United Sikhs. “These people found work in bakeries or as bus drivers where there were rules of uniform. They gave in. It was a generation that was required to fit in for economic reasons.’’

However, there were exceptions. In 1969, Tarsem Singh Sandhu refused to obey the rules. A bus driver in Wolverhampton, he sowed the seeds of a revolution by refusing to shave his beard or take off his turban. He was sent home. He took to the streets with 6,000 others, citing the example of the Sikh fighters in the World Wars who fought bravely and refused to wear a helmet. After he threatened to immolate himself, the town finally gave in. Today, it has the second largest Sikh population in England.

The rebellion had only just begun. In 1978, an incident of a Sikh boy being denied admission in Park Grove Private School in the UK because his father insisted on him wearing a turban became the rallying point of debate. The Mandla case, as it is known, went up to the House of Lords, which held that the Sikhs were not a racial group, that is a “group of persons defined by reference to colour, race, nationality or ethnic or national origins”. It is interesting that this definition does not include religion or politics or culture. You can discriminate against, say, Roman Catholics as much as you like without being in breach of the law, or against the communists or hippies as much as you please without breaking the law.

Last year, in India—home to the largest number of Sikhs in the world—a similar battle was fought. Jagdeep Singh Puri, a graphic designer, went to the Supreme Court because he was disqualified from an endurance cycle event organised by Audax India Randonneurs (AIR), associated with a French company. “When I reached with my bicycle at the event, they checked my papers,’’ says Puri, who started cycling in late 2013 to keep fit. “They pointed out to me that I needed to wear a helmet. I told them that I cannot take off my turban, that it is part of my religion.”

Puri chose to complete the journey from Panipat to Delhi “on my own risk’’ to prove a point. “They take a waiver from each and every rider anyway,’’ he says. Puri, who tried to write to AIR to explain the position of the turban, finally went to court with the help of United Sikhs. “I wanted a proper settlement,’’ he says. “There is a racing event in America that allows turbans.’’ The Supreme Court, however, refused to interfere in the matter.

And to ensure that Sikhs are not left out of sports and to raise awareness about the community, Puri has started Turbanators—a cycling group for Sikhs who want to ride but have been discriminated against. The group, which has done five long rides till now, however, is open to everyone, perhaps to avoid any discrimination. 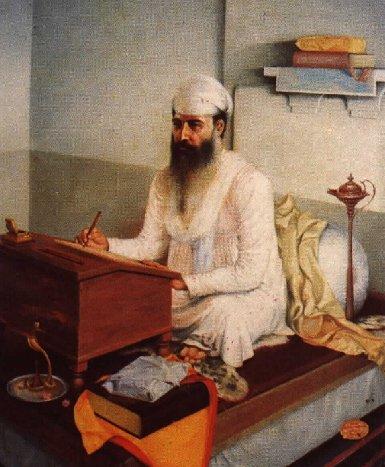 Sikh scholars have a long and proud history from Bhai Gurdas to Giani Ditt Singh and Sardar Kapoor Singh with too many to name in between.  Although in more recent times some academics have been seen as controversial
in the community, a confident community celebrates academic conferences
that provide a valuable forum for those interested to exchange
thoughts, discussions, and ideas.

This past weekend, one such conference occurred in Berkeley, titled “After 1984”
and was an example of the critical importance of scholarly exchange,
bringing together such luminaries as Gurharpal Singh, Pal Singh
Ahluwalia, Arvindpal Singh Mandair, and many others.

Despite the intellectual brilliance, the meeting point between
activism and the academy has always been somewhat uneasy.  This weekend
allowed such an exchange to occur, but was hardly the focus of the
conference.  The Jakara Movement is aiming to bridge this gap early next year with its first annual Sikholars: Sikh Graduate Student Conference.

To be held at Stanford University on February 20th, 2010,
the organizers are soliciting the community’s help in broadcasting the
news of this first conference and calling for proposals.  The deadline
for abstract submission is NOVEMBER 15, 2009.

The conference seeks to:

bring Sikhs and non-Sikhs working on Sikh-related issues
to an annual conference that unites a breadth of graduate expertise.
From academia, to health, law, and business entrepreneurship, the
conference will bring together a wide array of disciplines and
scholarly interests to create an institutionalized channel to present
papers on research, and informal circuits or networks for continued
discussion.

The purpose of the conference has been explained as:

Informal professional associations have already been
founded within the Sikh community, but are mainly confined to
networking. Academic conferences, related to Sikh Studies already
occur, but the ideas put forth are generally confined to a narrow
audience that engage in these issues, but are not necessarily linked or
concerned with the Sikh community’s general welfare. The Sikholars: Sikh Graduate Student Conference
does not aim to replicate these efforts, but rather to create a truly
innovative and imaginative conference. By bringing together promising
students in a truly multi-disciplinary fashion, we seek to incubate
promising research by engaging various activists and scholars in the
community together.

By bringing together activists and scholars; by bringing together theoreticians and practitioners; the Sikholars
conference will be a unique experience.  From health to medicine to law
to human rights to anthropology to sociology to history to philosophy
to business entrepreneurship to everything Sikh-related and in-between,all topics are welcome!  Begin submitting your proposals today, forward this link to a friend in professional or graduate school, and plan on not missing this unique experience.

On Thursday, Rathour, who is originally from New York, graduated from Joint Base San Antonio-Lackland.

Rathour will be based in Yokota Air Base in Fussa, Japan.

Copyright 2019 by KSAT – All rights reserved.