Sikh History and Heritage
by Admin


A Khalsa Army flag found on the battlefields of the Anglo Sikh Wars. Now Recreated in 3d

The Sikh Empire was composed of many military units each with their own Battle Standards or Flags. There many elite wings of Maharajah Ranjit Singh’s army including the Fauj-i-Khas.

After the death of the Maharajah, the Sikh Empire battled with the East India Company during the Anglo Sikh Wars of 1845-1846 and 1848-1849.  It was during this time that many battle standards of the Sikh Empire were captured or found on the battle fields of the Wars.

These were retrieved by the East India Company and the Governor General James Broun-Ramsey better known as Lord Dalhousie managed to buy ten Khalsa Army standards of these from a sale at a auction of the Toshkhana in Lahore.  These were kept in the family in Scotland until they were made available to the public in 1990. These were bought by private collectors and now reside in the UK and Canada amongst other places.

The origins of the flag are not known and there has been much speculation on the flag from them being used by ‘Hindu regiments’ within the Sikh Empire to them being an integral part of the Khalsa Army. However this type of flag has been the most prominent one found related to the Anglo Sikh Wars.

The flag is composed of of triangular form with three seams, one side with central gilt solar motif on floral ground, the other with depiction of the Goddess Durga on her tiger flanked by Hanuman and Kartikeya set on ground of floral sprays, the green silk borders with gilt scrolling floral vine, with wooden pole in three sections with steel spear head terminal and steel handle with two fluted bosses with brass fittings. 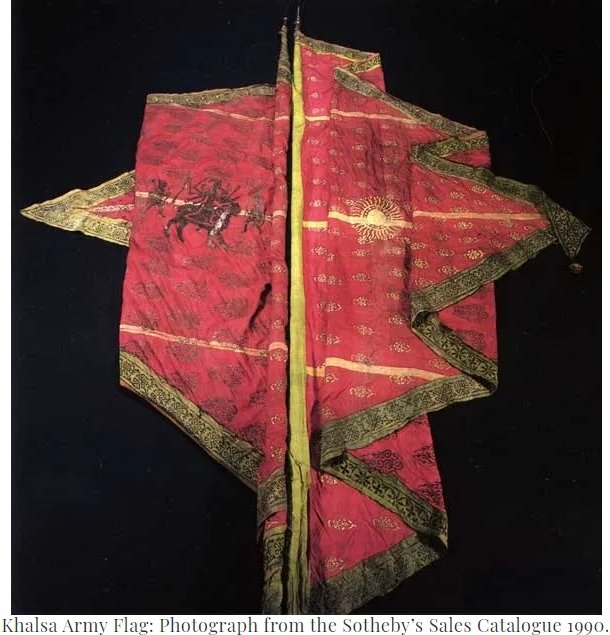 Other flags found include the Akali Flag as well as Army standards introduced by the French Generals of the Sikh Empire in their Fauj-Khas. It must be said that these standards were military banners and the Sikh religious ones were different.

These standards were also referenced within the Illustrated London News of 19th December 1846 which confirm at least two these flags were found at Ferozeshah and Sobroan. Two of these could be seen at Lichfield Cathedral (now taken off display), as well as two at Maidstone Museum. These are all in need of preservation.

The 3d version of the Khalsa Army Flag  was first revealed as part of the exhibition Anglo Sikh Wars: Battles, Treaties and Relics in 2017, where visitors were able to view the object on digital touchscreens. As part of the existing project Anglo Sikh Virtual Museum, the object has now been recreated so that it can be shown to online visitors. Whilst there has been much talk for many years regarding ownership and possible repatriation of the diamond to the Indian Subcontinent, the Sikh Museum initiative has worked to reclaim the Sikh heritage by going back in time and in essence shown what it would have looked like at the time of the Sikh Empire.

A humble signal station manned by only twenty one Sikh officers of the British Empire finds itself beset by 10,000 attackers. There is no hope for relief, but even knowing it will come at the cost of their lives, the Sikhs refuse to stand down.

Support us on Patreon! http://bit.ly/EHPatreon

There is an odd-looking sitting area in front of Kulwant Singh’s beautiful home, in the Andlu village of Ludhiana district in Punjab, which does not match the modern architecture of the house. When I asked him about it, Kulwant told me it was a remnant of the Muslim family who used to live in the house prior to 1947—he had retained the sitting area in exactly the condition it was when the family left. Kulwant said, “The reason I did that is, if ever the new generations of the old owners of the home come from lahnde Punjab”—Pakistani Punjab—“they should find at least some vestiges of their ancestors.” He added, “My own family came here after getting uprooted from Lyallpur, in Faisalabad. I never got the chance to see my old home, but at least someone must have this good fortune.”

In Halwara, another village in the Ludhiana district, Jagjit Singh left a pre-1947 haveli that belonged to Muslim Rajput intact right in front of a grand mansion he built for himself in 2009. He told me, “A lot of my relatives told me this old haveli does not look good in front of such a beautiful bungalow; pull it down. But I will not pull it down.” He added, “Sure, my family was not displaced from Pakistan, but the image of our old undivided-Punjab is etched in my heart. I am a person who loves the idea of Punjabiyat. I believe this haveli is my inheritance. How can a man part with his inheritance?”

There are many such examples in both the Punjabs—the state was split during Partition—which exemplify the shared legacy of the Punjabis settled there. One such indicator is the term each uses to refer to the other. Lahnda Punjab translates to setting Punjab or west Punjab, while the term for the Indian Punjab is chhadta Punjab, which means rising Punjab or east Punjab. The Punjabi prefixes refer to the sun’s rising and setting.

Indian Punjab is a border state and the animosity between India and Pakistan has a direct impact on its populace. The people living in the border areas are displaced again and again. Despite this, there is no feeling of enmity towards Pakistan in Indian Punjab, unlike other parts of the country where war is nothing more than news on Doordarshan and the radio. In the past few years, whenever India’s relationship with Pakistan deteriorated—during incidents such as the Dinanagar attack in July 2015, the Pathankot attack in January 2016 and the Pulwama attack in February 2019—the voices raised in Punjab were different from the rest of the country. And whenever Indian and Pakistani politicians have talked of friendship, Punjabis have given it their full support. Guests from Pakistan take part in government programmes whether the state is being ruled by Captain Amarinder Singh of the Congress or Prakash Singh Badal of the Shiromani Akali Dal. The gurdwara in Nawaz Sharif’s ancestral village, Jati Umra, which is in Indian Punjab, held a prayer meeting for his long life when Sharif was going to be sentenced after being arrested on charges of corruption during Pervez Musharraf’s military rule.

On 9 November 2019, when Pakistan announced the opening of the Kartarpur corridor—the site of the first Sikh commune established by the first Sikh guru, Nanak Dev—Punjab welcomed the decision more than anyone else. I met a devotee in the Dera Baba Nanak gurdwara situated near the corridor, who believed that “this work of opening the Kartarpur corridor happened because of Baba Nanak’s blessings that reached Imran Khan’s heart. The relationship between the countries will become peaceful due to this.” Another devotee, 65-year-old Ratan Singh, said, “My father used to roam the other side on bicycles; he would often tell me many stories from the Kartarpur mela. Many of his Muslim friends stayed back on the other side and till he died, he spent his entire life remembering them.” Ratan added, “It is easy to speak of war sitting in Delhi but only people like us who live in the border areas know what we go through.”