The Boy With The Topknot 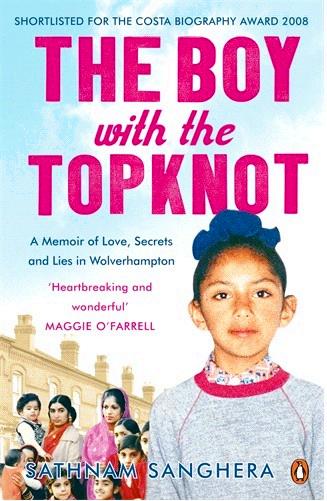 I was absolutely delighted last year when I saw the shelves of a Central London bookshop dominated by a book whose jacket featured the photograph of a delicate-looking nine year old Sikh boy tensely staring out. I can confidently say – this was the first joora to appear on a book jacket! This week that book “The Boy with the Topknot” by Sathnam Sanghera has won the Mind Book of the Year Award

I am often quick to complain that Sikhs are obsessed with identity issues and should instead focus on our real social and political problems; however blinded by my own delight at seeing a positive image I was perfectly happy to buy the book for the jacket alone. Reading the book though was the real delight – it is a story that promises “love, secrets and lies in Wolverhampton” but it is so much more than that.

For Sathnam Sanghera, growing up in Wolverhampton in the eighties was a confusing business. On the one hand, these were the heady days of George Michael mix-tapes, Dallas on TV and, if he was lucky, the occasional Bounty Bar. On the other, there was his wardrobe of tartan smocks, his 30p-an-hour job at the local sewing factory and the ongoing challenge of how to tie the perfect top-knot.

And then there was his family, whose strange and often difficult behaviour he took for granted until, at the age of twenty-four, Sathnam made a discovery that changed everything he ever thought he knew about them. Equipped with breathtaking courage and a glorious sense of humour, he embarks on a journey into their extraordinary past – from his father’s harsh life in rural Punjab to the steps of the Wolverhampton Tourist Office – trying to make sense of a life lived among secrets.

As a good Indian parent I am paranoid and edgy about my young son and the way he is perceived. I fret endlessly about role-models, positive images and helping him discover his confidence. Sathnam Sanghera cut his hair in his early teens and his chapter on that incident; heartbreaking and hilarious in equal measure is a must-read for every Sikh parent.

“The Boy with the Topknot” is also an inspiration for a younger generation of Sikhs who are staking out a career in the arts and humanities possibly to the annoyance of parents. Sathnam Sanghera, the Cambridge graduate and now an accomplished newspaper writer, author and award winning columnist for The Times has a story that is an inspiration to a new generation.

This book however, is not intended to be a manual for neurotic Sikh parents or a guidebook for students or even the luckless and comical story of Sathnam’s search by proxy of a suitable Jat Sikh partner. The heart of his memoir is the sensitively rendered story of his family’s handling of schizophrenia – an illness that has sadly afflicted his father and his eldest sister. Sathnam writes with great skill and bravery about this without ever allowing the narrative to descend into a poor-me story. Instead the genuine hero of the book, his mother, is revealed, often at the expense of the neurotic and nerdy Sathnam.

This is a beautifully written and important book for Sikhs from a major new talent in the UK from whom I hope we read more.

Meet and Eat with Sathnam Sanghera

An added bonus is that you can meet the author – Sathnam Sanghera in London on July 8. 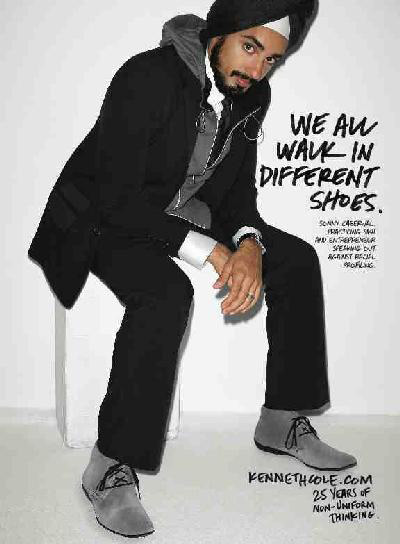 Seven years ago; sporting a Sikh turban could get you killed, as was Balbir Singh Sodhi, a gas station owner who was shot Sept. 15, 2001 in Mesa, Ariz., after his murderer mistook him for a Muslim.

Today, the trademark black head covering sported by male members of the Sikh religion can get you into the heights of mens’ fashion. Such is what happened to Sandeep Singh  “Sonny” Caberwal, 29, a graduate of Duke University and Georgetown Law School who on a whim, it seems, decided to take on a most unusual assignment: Modeling mens clothing to make a point about diversity.

Mr. Caberwal, shown in photos accompanying this column, grew up in rural Ashboro, N.C. as the son of a doctor and the wearer of a turban ever since he was a small child. His family is from Punjab, India. He has never cut his hair, as all Sikh men have been required to have long hair since 1699. It is always covered by a skull cap and turban. Some time ago – he does not know when – Kenneth Cole, founder of a clothing line by the same name – got an idea for an advertising campaign on breaking stereotypes – and plugging clothing. Mr. Cole hired a casting agency to find a male Sikh willing to be a model. The man had to be American-born, highly educated and articulate. There being no candidates on the usual lists, the agency began calling up national Sikh-rights organizations and Mr. Caberwal heard Cole was looking.

One thing led to another and last October, he found himself in New York posing in some pretty spiffy clothes along with that turban.

“People think Sikhs are fundamentalist, outside the mainstream of society, or immigrants or something is wrong with them,” Mr. Caberwal said in a visit to my office yesterday. “Kenneth Cole wanted to represent the fabric of American culture. There’s a lot of struggle in the United States as to how we perceive people post 9-11. I as much American as anyone else.”

Kenneth Cole has a history of provocative advertising, running ads promoting everything from AIDS awareness to helping homelessness. He designed T-shirts for World AIDS Day in 2005 and announced in 2006 he would stop selling fur in his clothing. His choice of a Sikh to represent an American Everyman has made headlines in newspapers in India, where Sikhs number some 25 million adherents, a drop in the ocean compared with the country’s huge Hindu majority. There are about 500,000 Sikhs in the United States.

“I’ve heard from thousands of people around the world on how they appreciated this,” Mr. Caberwal said. He hopes his day in the sun will encourage Sikh youth, whose unusual headcovering makes them stand out in a crowd.

“Having a unique identity can be a very lonely road to walk down,” the model said. “Fighting against a negative stereotype is consistantly tough.”

All Sikhs know what it’s like to be harassed, he said, and his brother-in-law has endured worse: physical threats, job descrimination and taunts just for being confused with Muslims. Kenneth Cole had heard of what Sikhs endure, he said, and wanted to include a Sikh in an ad campaign to introduce the concept that Sikhs are normal folk who wear cool clothes and think like us.

He flew to Washington Tuesday to speak at a Sikh-American dinner on Capitol Hill. I told him that I had rarely if ever encountered an ad agency that used religion to sell clothes. We disagreed over whether Kenneth Cole’s campaign had anything to do with faith. He said it did not; it was more about a “look” that is exotic, unusual, out-of-the-box now but that will be the new normal in a more diversified America.

Even if it’s just about building a brand, Kenneth Cole is borrowing symbols that are far more complex than a fashion centerfold. And where does it stop? If you use a turbaned Sikh to shock and captivate today, do you employ women in hijabs and men wearing yarmulkehs tomorrow? Religious clothing makes a statement, as we’ve seen from the granny-style dresses worn by fundamentalist Mormon women who were part of the west Texas compound raided last month by police and child welfare investigators.

Is there a point at which such clothing, worn for modesty or to express devotion to God, should not be used as a fashion statement, no matter how noble its objectives? I draw the line at who is doing the modeling. If the model – as was Mr. Caberwal, part of that religion, I’ve no problem with them wearing distinctive dress. But should that clothing become an accoutrement on a secular wearer, then no, it should not be used for fashion.

In the case of the Sikhs, Mr. Caberwal is the first such American model and a groundbreaker in illustrating how Sikhs and other Indians have arrived as part of the American scene.

MY TURBAN HAS A MEANING

November 27, 2015:  “Don’t you feel hot under your turban?” asked a colleague. I smiled, and replied to his curious question “No king has ever felt hot under his crown. And for Sikhs the turban is their crown”.

I am sure many of my Sikh brothers and sisters would have been asked this question and would have given a similar reply.

In over the years I have found a deeper answer to this question. What is the importance of a turban? A Sikh turban symbolizes the virtues and values that our Gurus have taught us. Everyday a Sikh ties his/her turban (yes. A kaur too ties a turban), he/she promises to abide by the values.

So what are these values and how is it connected to the turban?

A Sikh turban has folds or laads as we call it in Punjabi. Each laad signifies a value—Truth, Honest Hard Work & Satisfaction, Fearless Seva (help), faith and Equality.

Truth—The first laad is a promise to the almighty that as a Sikh I shall always stand and support the truth. No situation will shake my belief in truth and I am ready to face any consequence to support it.

Faith—The second laad is a promise to have faith in the almighty and to surrender yourself by chanting his name (naam japna).

Honest Hard Work & Satisfaction—The third laad is a promise to work honestly and be satisfied with what one has, and to thank the almighty for this. This is one of the reasons why you may not find a Sikh begging but working hard to earn his/her living.

Fearless Seva—The fourth laad is a promise to serve humanity without any fear. If you see someone in need of help, don’t think twice and offer your help.

Remember Harman Singh who removed his turban to save a young boy’s life?

Or do we remember the 12’clock joke that has always been cracked, which is actually a true Sikh history of bravery where Sardar Jassa Singh (commander of the Sikh Army) and his army saved the lives of women and children from the oppression of the Mugals (Nadir Shah)? 12 o’clock (midnight) is the time when a small army of Singhs led by Sardar Jassa Singh attacked the sleeping Mugal army using guerrilla warfare.

Equality—The fifth laad is a promise to never discriminate anyone based on his or her cast, creed, gender, race, colour, wealth, etc. Every human, plant and animal has been created by the almighty and his birth has a certain duty to be performed. So a true Gursikh will always respect others by welcoming them by saying Sat Shri Aakal.

One of the best examples of equality is the Langar Seva. People of all faith and religion are welcomed to have guru ka langar. Whatever may be your status quo, you will be made to sit down on the ground along with the sangat to have the meal.

The other example of equality comes from Guru Nanak Dev ji’s verse (Raag Aasaa Mehal 1, Ang 473) where he values the importance of women.

That is the true value of the turban. It is not a piece of cloth tied to one’s head. It is a promise to serve humanity and share goodwill.

So the next time you see a Sikh welcome them by saying Sat Shri Aakal. By doing so you are honoring the values the person stands for. And in return you will get a smile and a friend for life.

And that is my answer to how hot I feel under my turban.

Hope you all agree.