While quarantined in his South Ozone Park home, 25-year-old Japneet Singh was figuring out different ways to give back to healthcare workers and other essential personnel on the front lines of the coronavirus pandemic.

“I thought maybe I could donate supplies of personal protective equipment to hospitals, but after contacting a few vendors, they were out of stock,” Singh said.

It wasn’t until Singh saw his an Instagram post from a friend who works at Elmhurst Hospital and simply asked the question, “What is there we can do to help or at least show appreciation?”

“I then asked him, ‘What if we donated some pizza?’” Singh said. “Who says no to pizza, at least here in New York? Since I knew this would be out-of-pocket and it was the most affordable thing to do, he helped me organize through the nursing department to deliver the pizzas.”

Singh made his first delivery of 20 pizza pies to Elmhurst Hospital on March 31.

His initiative took off after posting on social media receiving wide support from friends, which then resulted in the creation of a GoFundMe account to raise money to purchase more pizzas at a discounted price from Papa John’s.

So far, Singh and his friends have made deliveries to Jamaica Hospital, Northwell Health Long Island Jewish Hospital and Kings County Hospital in Brooklyn.

“There were some hospitals getting more love than others, and when we went to Kings County, people were amazed saying, ‘We are always forgotten,’” Singh said. “After that, we thought about the grocery store workers, the folks working at Walmart, police precincts and FDNY stations.”

A 2018 alum of CUNY Queens College, Singh is embodying the school’s motto: “We learn so that we may serve.”

He received a proclamation from Councilman Rory Lancman and the Queens Delegation for his contribution to the community.

“Most of us are first-generation college grads — mostly from immigrant families — and we want to make a difference in the community, and I think what we learn in CUNY and the humbling backgrounds we have gives us the mindset to do that,” Singh said.

He is also a member of the Sikh Coalition, a nonprofit organization working to protect Sikh civil liberties across the United States, while also highlighting the religion and positive work of Sikhs worldwide.

In June 2019, Singh founded the New York Sikh Council to create a platform for the youth. Its mission is to spread love, peace and unity, as well as raise awareness of Sikhs within the diverse communities of New York.

As faith communities join together to help each other during the coronavirus crisis, Singh said, hopefully they can continue the momentum after the pandemic is over.

“When it comes to bringing faiths together, New York City does a great job in doing that, and we have so many programs geared towards everyone — culture, race, gender, identity,” Japneet said. “In times of need people of all faiths are coming together and helping out their brothers and sisters next door, and that’s going to define what this pandemic’s history is going to be. It’s really going to depend on how unified we are once this is done.”

It took the Gurdwara Sahib of Fremont, Calif., just a few days after suspending religious services in March to set up a meal and grocery delivery program, and a drive-through meal pickup system outside the gurdwara.

Cooks wear gloves and masks, and the kitchen is big enough for workers to stand more than six feet from one another. As at most gurdwaras, the menu changes regularly, but is typically Indian and always vegetarian. (Meat is not permitted in gurdwaras.)

While these Sikh volunteers, known as sevadars, are experts in mass-meal preparation, they aren’t as accustomed to spreading the word. The Fremont kitchen has produced 15,000 to 20,000 meals a day on holidays like New Year’s Eve, said Dr. Pritpal Singh, a member of the gurdwara. But now, the gurdwara is serving just 100 to 150 people each day.

Dr. Singh said he hoped that more people in need would come pick up food. “We could do hundreds of thousands of meals if given the task,” he said.

But with the demonstrations unfolding around the country, Sikhs aren’t waiting for people to come to them any longer. On Tuesday, volunteers from the Gurdwara Sahib attended a protest in Fremont and handed out several hundred bottles of water as a show of solidarity.

On a recent Friday, Gurjiv Kaur and Kiren Singh asked the volunteers at their gurdwara, the Khalsa Care Foundation, in the Pacoima neighborhood of Los Angeles, to prepare meals in the community kitchen that they could take to the protest. The next morning, they and others picked up about 700 containers of pasta with a garlic- and onion-laden tomato sauce and 500 bottles of water from the gurdwara, and set up a tent in Pan Pacific Park. Soon, protesters started arriving at the tent with other donations, like medical supplies, snacks and hand sanitizer.

“It is our duty to stand up with others to fight for justice,” said Ms. Kaur, a graduating senior at the University of California, Irvine. “Langar at its core is a revolution — against inequality and the caste system,” the antiquated hereditary class structure in South Asia, which Sikhism has always rejected.

My name is Satinder. I am from Melbourne, Australia and currently based in Punjab, India.

This week I have launched the Sikh Reflection Journal, largely through my Instagram @chardikalavibes.  This has received an incredible worldwide response so far, with over 70 customer orders within the first week.

I made this journal to help me with my Gurbani studies.  This is not intended to be a very profitable business, rather the mission is to help others understand and apply Gurmat teachings into their daily lives. The journal is in English, suitable for all ages and all levels of spirituality.

Included in the journal are inspirational pages of Gurbani, introspective weekly themes and questions and daily prompts to help write down and keep track of meditation practices. 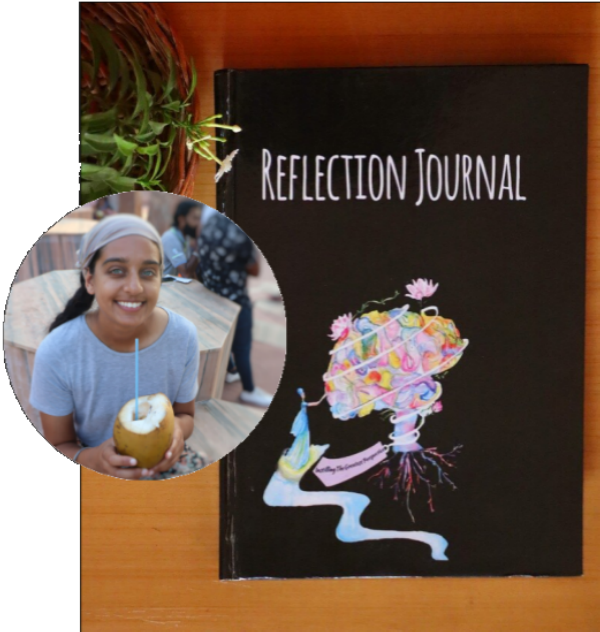 Why the Reflection Journal?

This journal is the labour of love after my own struggle to incorporate spiritual reflections in my journaling. Spirituality is often difficult to write about as it is so broad and abstract. This journal breaks down key aspects of daily spirituality in order to make writing easier.

Space has been provided to reflect on physical health, social interactions and thoughts as these influence our daily spiritual vibration. Further, there is space to record any specific meditation practise and write down any progress or challenges you are facing.

In addition there are many questions and inspirational pages throughout the journal which you can reflect on to deepen your spiritual practice. On days you feel like changing it up such as free writing, taking spiritual studies, doodling or drawing, there are ample lined and blank pages also provided.

Pages are undated so you can use the journal as often or infrequently as you wish.

An all-in-one space for everything spirituality.

Message to Domestic Customers within India

We are very empathetic to Indian consumers often missing opportunities due to a significantly lower national average income and lower national minimum wage in comparison to other countries.

This Reflection Journal has been created with the intention to help others with their spiritual journey and we do not want it to be unaffordable for our Indian Customers. We hope this special discounted price will help increase the accessibility of this journal for our Indian consumers.

To see the amazing responses to the journal, please visit my Instagram:
@chardikalavibes and @thebestlifeot

I am now reaching out to Sikh organisations to ask whether you would be interested in this journal for your organisation. For yourself, colleagues, families, or perhaps for use as gifts, prizes and so on at camps or events.

Please let me know if you are interested via this email. There is limited stock available.

Please share the word and help this journal reach those that would love and benefit from it!