For the first time, the Sikh community in Pakistan has started commemorating the Jyoti Jot of Guru Nanak Dev at Kartarpur Sahib Gurudwara.

Indian devotees gave it a miss due to the COVID-19 pandemic.

Pakistani Sikhs, mostly from Sindh and Khyber Pakhtunkhawa, are taking part in the three-day events of the Jyoti Jot (death anniversary) of Guru Nanak Dev at Gurdwara Darbar Sahib that began on Sunday, said Amir Hashmi, spokesperson for the Evacuee Trust Property Board (ETPB) which looks after the minority holy places in the country.

No Sikh from across the border has come to attend the festivities, he said, adding that the COVID-19 Standard Operating Procedures (SOPs) are being observed.

This is the first time that the Jyoti Jot of Guru Nanak Dev has been observed at Gurdwara Darbar Sahib ever since it came into being.

The Indian government was formally asked to let Sikhs attend the events but New Delhi rejected it apparently due to the coronavirus pandemic, said the official.

Pakistan on June 29 reopened the historic Kartarpur Sahib Corridor three months after it was closed in the wake of the COVID-19 pandemic.

The corridor allows Indian pilgrims to undertake visa-free travel to the historic shrine.

September 22, 1539 is the day that Guru Nanak, then 70 and living at Kartarpur, a town he had founded in 1522, passed into Sachkhand – the domain of the True Lord. He had days before installed Bhai Lehna, renamed Guru Angad, as his successor Guru of Sikhs in a ceremony at Kartarpur. In years preceding, Guru Nanak had set up a Dharamsal at Kartarpur where the nascent community of believers, the Sangat, met for daily Kirtan – singing of praises of the Creator Lord – and partake of food at Langar, free kitchen, that the Guru had institutionalized. 1

This Gurpurb is being celebrated at the Gurdwara Darbar Sahib at Kartarpur on 22 Sep. this year for the first time since the opening of the Kartarpur Corridor on November 9, 2019. Due to the Corona Virus precautionary measures, Kartarpur Corridor continues to be closed and international travel is severely curtailed. This would impact the arrival of pilgrims from India and other countries on this occasion.

Guru Nanak is remembered as Hinduan da Guru te Musalmanan da Pir – Guru of the Hindus and Pir of the Muslims. The tradition tells us that after his passing the body of Guru was claimed both by Hindus and Muslims. However when the sheet covering Nanak’s body was removed, they found instead a heap of flowers – which they divided and set up mausoleums in his memory , separated by a wall, that have lasted till today.

Bhai Gurdas, a few decades after passing of Guru Nanak, had written that:

After journey of Multan, Baba Nanak again turned towards Kartarpur. His impact increased by leaps and bounds and he made people of kaliyug remember Nam. Desire of anything except the Nam of the Lord, is invitation to multiplying sufferings. In the world, he established the authority (of his doctrines) and started a way of life, devoid of any impurity, nirmal panth. During his life time he waved the canopy of Guru seat on the head of Lahina, Guru Angad, and merged his own light into him – Var 1, pauri 45.

The ‘sangat’ in time became the prototype for building of the Sikh faith community as it grew and spread. The continuity and leadership was provided by the Guru and the first such transition also took place at Kartarpur. In the process, Kartarpur also became the final resting place of Guru Nanak. So Kartarpur had too many firsts happen, in those few fateful years, on its sacred soil.

Nonetheless Kartarpur, in spite of its historic role, has stayed relatively peripheral to development of Sikhs and Sikhi, possibly due to certain disconnects and discontinuities it experienced in its history. We propose to talk about those underlying institutional issues at another time. 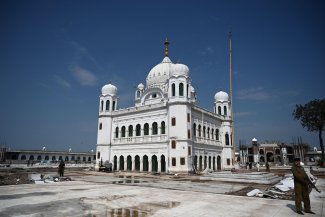 KARTARPUR AS WE KNOW NOW

For now, we want to briefly review the developments since the heady feelings that had been generated by the inauguration of the Kartarpur Corridor, a little over nine months earlier. The expectations were high, both in terms of the volume of usage of the visales transit facility and the likely peace dividend of the tremendous goodwill plus a sense of pervasive optimism that the event had given rise to.

The Question of Footfall

The footfall has been much below the expected levels from the beginning. Even if there are no systemic impediments, the flow may improve only marginally because corridor
offers restricted day visit to Kartarpur Darbar Sahib from Dera Baba Nanak ICP at total cost that may be unaffordable for average families.

Sikhs tried to concentrate on enlarging the yatri pool by facilitating their documentation needs, offer free travel from Amritsar, facilities for free stay at Dera Baba Nanak during
transit and help out with sewa and liturgical services at Darbar Sahib Kartarpur but the improvement was insignificant. Lockdown due to the Pandemic forced closure of the facility and the subject is gone off our horizon.

Considering the various factors, when the circumstances become more congenial, we will need a broad structure answering to the following requirements to make this project
start delivering:
• SGPC/PSGPC to take care of liturgical, sewa and devotee needs and services required and coordinate operational issues with concerned government agencies on their side of border.
• Akal Takht Secretariat to be equipped to process coordination of extra resources needed for the current or new projects, channeling global resourcing, rule setting and providing dispute resolution support.
• Akal Takht to consider setting up a joint Advisory Committee to help develop coordinated approach for Sikh related procedural changes, agreement review points to be pursued with respective Governments by SGPC/PSGPC

• Peace and Interfaith harmony Sikh initiatives, engagement and advisories to be by a joint Committee under Akal Takht aegis.
The principles guiding the above are:
 All operations are managed and coordinated with government agencies by the Gurdwara Management Committee concerned, while
 all the policy, reviews, dispute resolution, new initiatives, resource mobilization and advisories would be by and under the aegis of Akal Takht. 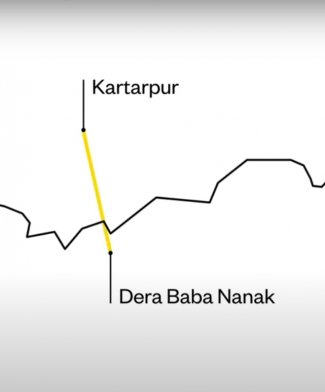 We have to realize that using the opening provided by the corridor to set the neighbors on a path to Indo-Pak amity and regional prosperity can only be accomplished by the political leaders of the two countries. Sikhs share that hope because of the force of their persuasion and theology and also because they realize that it is only abiding Indo-Pak peace and harmony that will help the Sikh longing of connecting with Kartarpur to be fulfilled in practice.

Thus the Sikhs agree with and endorse the calls for peace and harmony and would no doubt get engaged in supporting peace initiatives and to help avoid any acts that may impede the maintenance of peace. On their own, however, Sikhs are not in a position to initiate the peace process. The role of Sikhs can and should be a part of the initiatives by leaders of their countries.

The Indo-Pak Peace and Harmony should not be read only as control over cross border acts of terror and related planting of spies and saboteurs or other acts of hostility but it should include security of the minorities and their heritage in both the countries. That is the real umbilical cord that will ultimately sustain Kartarpur spirit and model.

This day therefore assumes, more vividly, the need for Sikhs to rediscover their old and tried role of helping the suffering lokaaee to resist the wrongs that happen all the time in their midst and proactively make ourselves and others realize that absent goodwill for one and all our endeavor may not yield much.

Not easy! True, but that to me is the message of Kartarpur that Guru Nanak bequeathed the humanity!!