To help pass the time, Sikhlens has uploaded some of our classic films to YouTube channel for you to watch in the comfort of your home.

Three new films were added this past week. If you like these films, you can subscribe to our channel to see additional Sikhlens films. Feel free to share these with friends and family. If you would like us to make more of these films, please help support Sikhlens at https://sikhlens.com/donate/

I RUN WHILE TALKING TO GOD: Athletes have enjoyed hero-worship for thousands of years, because of their amazing feats. But who can top Fauja Singh running a full marathon at age 101? This remarkably humble, jaunty, world-class athlete and survivor of much grief and the death of loved ones, thanks God for his health and his joyful outlook on life.

Please enjoy the movie, I Run While Talking To God.

SIKH LOVE: An amazing filmmaker has managed to win the trust of a variety of Sikh women, who speak to the camera about their personal feelings, emotions, and experiences involving various forms of love. They open up more honestly and frankly about Sikh hearts and minds, than has ever been seen before on film. Let them share with you, what they may not even share with their own loved ones. It’s astonishing. It’s Sikh Love.

NARRY THE TAILOR: In Bangkok, Thailand, Narry-the-tailor and his family continue his father’s perfectionism by creating impeccable custom-made suits for fans who come from all parts of the globe, because of the quality of work coming out of their bustling shop. His philosophy is simple: a custom piece of clothing inspires great self-confidence, something every businessman values.

The President of Afghan Hindu & Sikh Welfare Society, Khajinder Singh Khurana passed away last month in Delhi. He was forefront in arranging accommodation, securing funding and other facilities for the recent Afghan Sikh refugees. I am sharing his short biography which I have translated from the upcoming book in Punjabi on Afghan Hindus and Sikhs by Dr Joginder Singh Tej Khurana, former member of the Afghan Great Assembly (Loya Jirga) 1990 -92.

Sardar Khajinder Singh was born in 1953 in the house of Bhai Mohar Singh Khurana and Mata Parkash Kaur in Shor Bazar, the old part of the city of Kabul. He completed his primary education at Khalsa Religious School, Kabul and was later enrolled in ‘Nadria Lacey’ for higher secondary education. Following this he joined the ‘British Council Kabul School’ to learn English and gained a certification which assisted him to serve in the UNESCO Kabul Office.

Later he joined his family business, where he proved to be a very successful in the import/export venture between Kabul & Dubai along with his brother Amarjit Singh, Manmohan Singh & Balbir Singh. He was part of the managing committee of Guru Nanak Religious School, Karte Parwan Kabul from 1975-80.

Sardar Jai Singh Fani (1941-77) the only independently elected Sikh Parliamentarian from Afghanistan was the younger brother of his Bhai Mohar Singh. The change in regime in December 1979 led the family to migrate to Delhi in 1980. He married Bibi Rajinder Kaur on January 2, 1983 at Gurdwara Greater Kailash, Delhi. He was later blessed with two sons and a daughter. Due to the unfavourable security conditions in Afghanistan, he left Afghanistan permanently in 1988.

Dr Khurana (not related) met Khajinder Singh in 1992 and found leadership qualities in him. Both joined the newly created Afghan Hindu-Sikh Welfare Society, Delhi and started community service together under the guidance of late Shri Ganga Ram (former Afghan Parliamentarian). In the year 2000, he was made the First Joint Secretary of the organisation, which he served very well till 2003. In May 2001, his book on history of Sikhs and Hindus in Afghanistan in Punjabi, Kabul di Sangat tee Afghanistan da Sankhep Ithas was released. 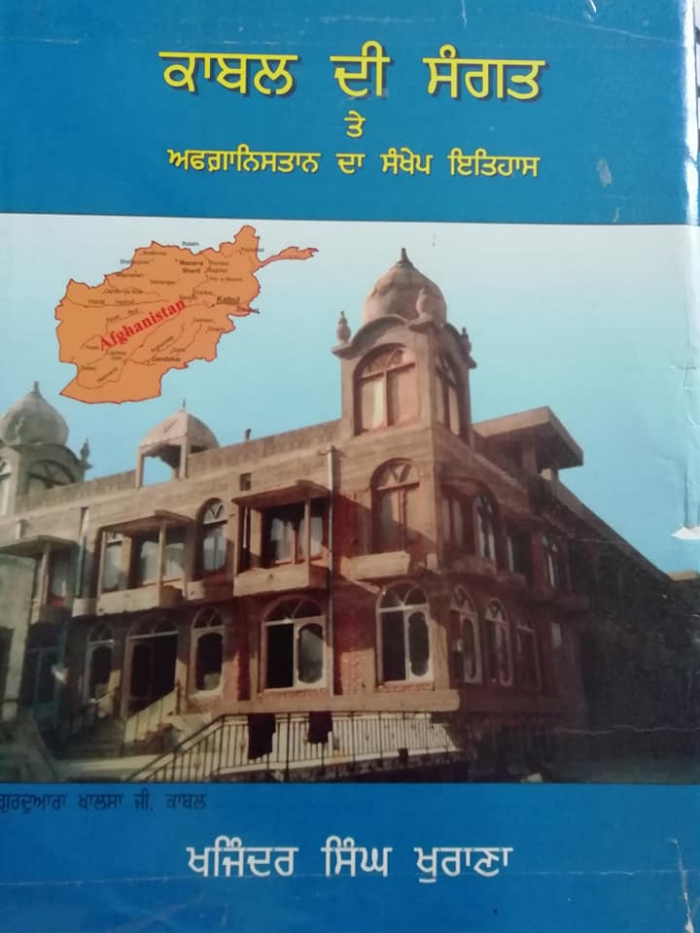 In early 2017 I contacted him in Delhi and he kindly sent a copy of the book to me in UK. I have duly referenced his work in my book, Afghan Hindus & Sikhs History of a Thousand Years.

Following the death of Shri Ganga Ram in 2003, Khajinder Singh became the President of Afghan Hindu-Sikh Welfare Society. He led the charity ably but his services for past five years are noteworthy. The killing of innocent Afghan Sikhs on 1st July 2018 and 25th March 2020 in Jalalabad and Kabul shook the community. He collaborated with the Khalsa Diwan Welfare Society for temporary settlement of Afghan Hindus and Sikhs in India, as well as the efforts of in acquiring Indian citizenship for them. Charity Khalsa Diwan Afghanistan UK and Central Night Germany Committee’s assisted in evacuating about 450 Afghan Sikhs from Kabul to Delhi in August this year.

The Citizenship Amendment Act (CAA) was passed in December 2019 offers citizenship to non-Muslims fleeing religious persecution from three nearby countries. Initially as a bill it was only limited to Pakistan and Bangladesh only. Khajinder Singh rose to the occasion and met Delhi Sikh Gurdwara Management Committee members, Akali Dal and Central Government Minsters to impress them to include Afghanistan citizens in the bill. 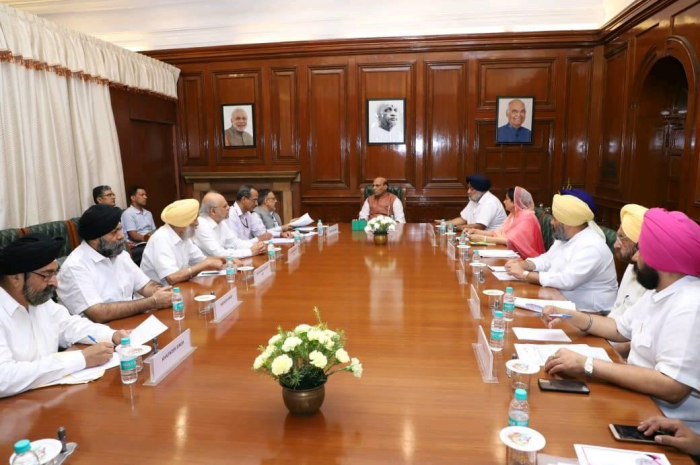 He understood the importance to lobby about the issue and build an opinion among the stakeholders.

On 13th September due to cardiac arrest he left this mortal world for the heavenly abode. The Afghan Sikh and Hindu community will remember his selfless services till their last breath. On a personal level I lost an elder friend whom helped me in my research, and it will be very difficult to fill his void in my life.

*The writer of this article is the author of the book, “Afghan Hindus and Sikhs A History of a Thousand Years“

In 2011 I had the opportunity to interview Sd Khajinder Singh Khurana for Sikh Channel in London. In this Punjabi interview, he talked about his book and the history of Sikhs in Afghanistan, and in the diaspora.

Sd Khajinder Singh, a prominent activist who worked tirelessly to relocate Afghan Sikh and Hindu families out of Afghanistan to India. He was a very respectful member of our community and held in great regard by both Sikh and Hindu Afghan communities.

Sd Jagmohan Singh, the editor of The World Sikh News has written an article on late Sd Khajinder Singh
https://www.theworldsikhnews.com/veteran-afghan-sikh-leade…/

In this article he hopes and prays that somebody from amongst those who have come from Afghanistan will carry on the good work that still remains unfinished as many Afghan Sikh families in Delhi are still starting at an uncertain future.

His full interview can be watched on YouTube: https://youtu.be/lQe4Vt03QSU

In light of the recent terrorist attacks in Afghanistan against the Sikhs and the dire situation they are currently in, UNITED SIKHS has been actively partnering in the campaign to protect the minorities in Afghanistan  with the American Sikh Caucus to move the issue of their safety and their migration to the forefront. Harpreet Singh Sandhu, Executive Director of the American Sikh Caucus Committee said that “UNITED SIKHS was the first human rights organization to reach out after the March 25th incident and we immediately swung into action to reach out to the members of the Congressional Sikh Caucus.”  More congressional members are to follow and become co-signatories to the said letter. UNITED SIKHS has been the only Sikh organization with boots on the ground in Afghanistan since the terrorist attacks against the Kabul Gurdwara.  Our robust network and experience on the ground in such situations has allowed us to provide accurate information and a more comprehensive understanding to our lawmakers.

Through these efforts, 26 US members of Congress have signed a letter on May 4th, 2020, urging Secretary of State, Mike Pompeo, to take steps to ensure “safe and expeditious relocations of Sikhs and Hindus trapped in war-torn Afghanistan”. Congressman John Garamendi, who is the co-chair of the American Sikh Caucus along with 25 members of Congress accurately described how minority communities are under an imminent threat from IS terrorists in Afghanistan.

The letter highlights the launching of the International Religious Freedom Alliance (IRF Alliance) by Sec. Pompeo earlier this year with the objective of fighting for international religious freedom for every human being. The Caucus appeals that “this is the time to demonstrate the administration’s commitment to that principle by leading this alliance in coordinated, multilateral action to protect an endangered religious community”.

The letter also calls for including the vulnerable Afghan Sikhs and Hindus in the U.S. Refugee Admissions Program (USRAP) through Priority I embassy referrals allowing the Sikhs and Hindus to be safely relocated in the country by “this fiscal year”. This program is a collaborative effort among different agencies and departments of the federal government and UNITED SIKHS is actively engaging with those departments for this to come into fruition.

UNITED SIKHS Executive Director Jagdeep Singh said, “humanitarian crises such as the one recently endured by Afghan Sikhs should not be mistaken as someone else’s problem. Left unchecked in any country, these types of massacres manifest themselves in other parts of the world”.

We are thankful that  Members of Congress have flagged this matter to the current administration as it is a matter of life and death for Afghan Sikhs and Hindus. But the fight does not stop here, UNITED SIKHS will continue to provide immediate relief, assistance and advocate for minorities suffering in  Afghanistan and keep the global community updated.

Recognize The Human Race As One