Sikh Scholar Speaks Out Against Islamophobic Remarks at NYC Marathon

Singh, senior religion fellow at the Sikh Coalition, a civil rights advocacy group for the Sikh community, took to Twitter to describe two — out of four – incidents where he dealt with xenophobic hate. In one incident, while Singh reached out for a water cup while running, a woman pulled the cup back and called him a “dirty Muslim.”

In another, a man shouted at other marathon runners that Singh is a member of ISIS and is closing in on them.

His tweets quickly got the attention of the New York City Marathon organizers and New York Road Runners who worked with him to get more information on the Islamophobic incident.

“In our eyes, the incidents that occurred are a total outlier in how hard our volunteers and others are working with us together in the marathon,” Chris Weiller, a spokesman for NY Road Runners, told Mic in a phone interview. “It’s certainly not in line with our values as an organization or the marathon itself.” 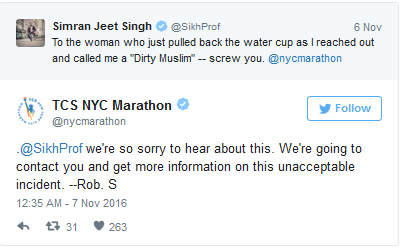 Singh, who competed in the NYC Marathon for the fifth time Sunday, said this wasn’t the first time he’s received Islamophobic and racist remarks at the event.

“This year was different in both degree and quantity though — I had more racist and more charged comments than in the past,” Singh told Mic in an email. “I think this clearly reflects what we’re seeing around this country in terms of the sharp fracturing along the lines of race and religion.” 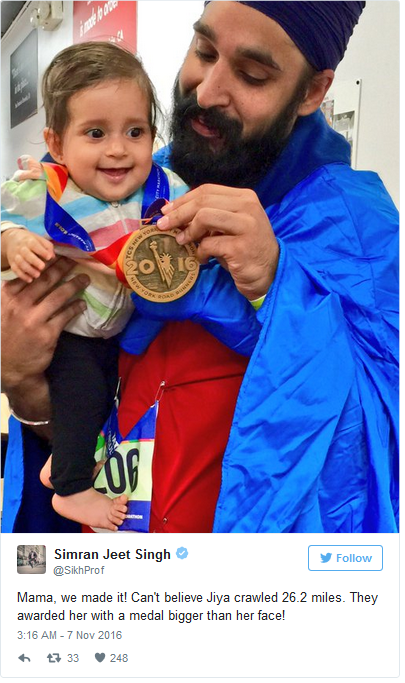 Since the Sept. 11 attacks, the Sikh community has faced anti-Muslim violence in the United States. On Sept. 25, for example, two white men from Richmond, California, attacked 41-year-old Maan Singh Khalsa at a traffic stop. The men allegedly pulled Khalsa’s head out of the car window, punched him and then cut up to 10 inches of his hair off.

Simran Jeet Singh also said continuous anti-Muslim attacks on the Sikh community speak to the United States’ “collective ignorance and bigotry.” According to a 2013 joint survey with Stanford University and the Sikh American Legal Defense and Education Fund, about 49% of Americans think Sikhism is a sect in Islam. Sikhism is, in fact, a religion of its own that originates from India and is the fifth largest religion in the world.

“Our Sikh faith teaches us to stand for justice and to be an ally for anyone who is being oppressed,” Singh said. “And speaking for myself, there’s something powerful about being put in a position where we have to consciously make the decision to do the right thing and stand alongside our Muslim sisters and brothers during this difficult time.” 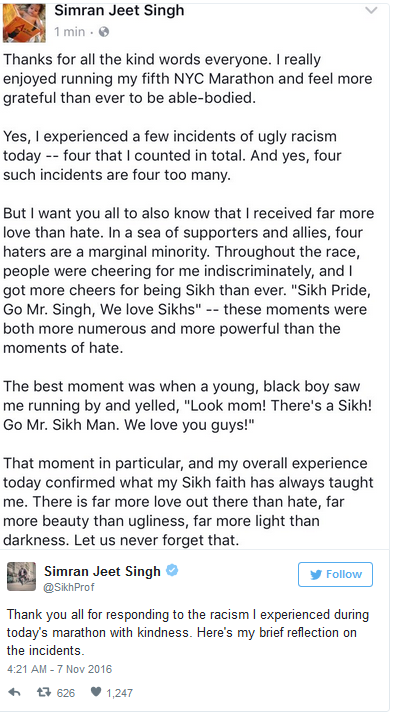 The Sikh scholar and advocate said that it’s important to remember the hatred he received Sunday is not equal to the grotesque hate crimes the Sikh and Muslim communities have experienced in the past 15 years.

“What I experienced is much smaller in scale than the brutal hate crimes that Muslims and Sikhs have endured in New York City over the past few years,” Sikh added. “I believe it’s critically important that we confront racism in whatever form it occurs because the consequences of not doing so are just too heavy a price for all of us to pay.”

“I want to share about how Sikhi was my form of inspiration. As a kid I grew up with a lot of difficulties personally and with my family. I faced issues of not having much diversity around me and racism as well. One thing that kept me going was doing NitNem and doing a lot of Paath. When my brother and sister were feeling down, I would take them up to my room and we would read some Banis together. Doing this would give us so much peace, and make us forget about what was going on. It gave us hope and a connection to something bigger than ourselves. Throughout my life if I felt lost or confused I would always turn to Sikhi. I found that the things 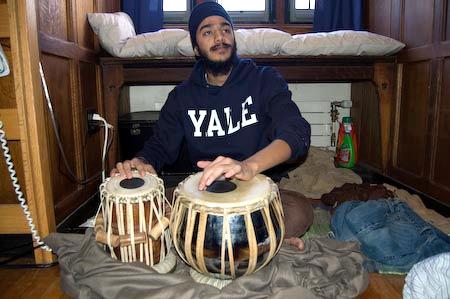 Before coming to college, Arjan Singh (Class of 2011) said his Sikh heritage permeated his life. But at Yale, he found that sense of community missing.

“Back home, every week on Saturdays, my family got together to meet with another Sikh family, to meditate and to sing hymns,” Arjan said. “Spirituality and religion are very rarely talked about here [at Yale].”

During the past two months, Singh and other Sikhs at Yale have come together to form the Sikh Student Society at Yale. Although the group currently has just 10 members — which is the entirety of the University’s undergraduate and graduate Sikh population — its members hope to foster a sense of community and to mitigate Sikh parents’ fears about sending their children to the Elm City.

For many Sikhs, deciding on a college depends on the presence of a Sikh community in the area, said Rajbir Singh Datta, national director of the Sikh American Legal and Defense Fund. Datta said American Sikhs fear sending their children to universities without Sikh communities because they want children to maintain their culture, language and religious beliefs. For example, Datta said, Sikh parents are less anxious about sending children to universities in California, where over half of all American Sikhs live.

“If a Sikh gets into Yale and Stanford, he’s going to go to Stanford, because Stanford has a more advanced Sikh Student Association,” Datta explained. “If at Yale, Sikhism is not seen as important, then Sikh students won’t come.”

“Cultivating and supporting a tradition that might not be large in [numbers] is so very important if we are to be true to our vision of being a university that is truly global in scope,” said Kugler, who helped found a similar organization in her time as university chaplain at Johns Hopkins University. “I really feel strongly that Yale needs to support the creation of a Sikh Student Association.”

Kugler brought Yale’s Sikhs together for a September dinner at her house in an attempt to connect the Sikh community. “We didn’t really know about each other until Sharon reached out to us,” Singh said, explaining why the group had not formed earlier.

“It’s like creating a family for Sikhs at Yale,” he explained. “It’s nice to talk with others about things that we don’t really have to explain beforehand.”

Singh said that Yale’s 10 Sikhs have met together twice in the past month to discuss what the group would do and create a constitution. The organization was supposed to finalize its constitution Oct. 23, but members were unable to meet due to conflicts with midterms.

The group has no formal plans, though Singh said he wishes to educate the wider Yale community about Sikhism, perhaps by bringing in a Sikh speaker for a Master’s Tea. The group also hopes to hold festivities for upcoming Sikh holidays.

Yale’s Sikh Society is the second of its kind in the Ivy League. Harvard University’s chaplaincy Web site lists 26 major religions the chaplains represent, but Sikhism is not one of them.

Princeton’s Dean of Religious Life, Alison Boden, said in an e-mail that although there is no Sikh group at Princeton, there are around 40 Sikhs at the university. Boden added that Princeton’s Office of Religious Life is lending support to a “Sikh student who is motivated to start such a group,” though she gave no specifics.

The only other university in the League to have a Sikh student organization is Columbia University. Columbia’s Sikh Student Association was formed in 2005 and has 18 members. In an e-mail, the Columbia group’s current president, Rajkaran Sachdej, said his group hopes to reach out to other Sikh student groups, potentially including Yale’s.

Sikhs, SALDEF’s Web site reads, follow the monotheistic teachings of 16th-century Indian prophet Guru Nanak and seek to attain God “through meditation upon and remembrance of God’s Name.” According to the organization, there are 500,000 Sikhs living in the United States, with a concentration of between 75,000 and 100,000 in the Northeast.