Uber driver Gurbrinder Singh is being hailed a hero for returning his passenger’s purse which contained $10,000 in cash and some important documents.

On the day of the incident on October 23, Mr Singh recalled that he ferried at least three customers around the Melbourne suburbs of Box Hill and Richmond.

“One of the customers was in such a rush that she left her purse in the back-seat of my car,” Mr Singh told SBS Punjabi.

“I had requested Uber to connect me to this customer who later told me that she was extremely stressed and was also afraid of losing her hard-earned money.” 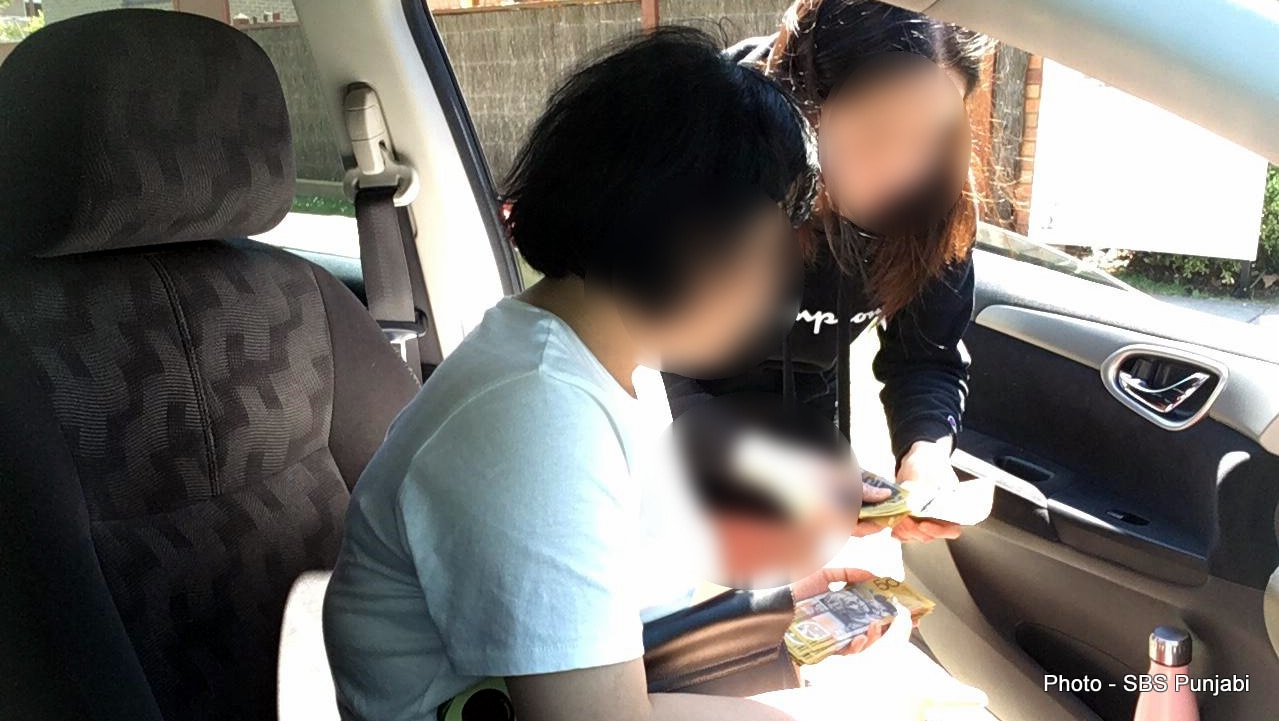 The passenger counting her money while sitting in Gurbrinder Singh’s car.

Mr Singh said Uber’s dispatcher system was able to connect to this customer in a short span of time.

“Uber immediately came to my rescue. It was very important to reach her in time as she seemed very shaky and upset when I spoke to her over the phone,” he said.

“She was very appreciative and also praised my honesty. But, I feel there is nothing special about it as I was just doing my routine job, something that I would do on any given day.” 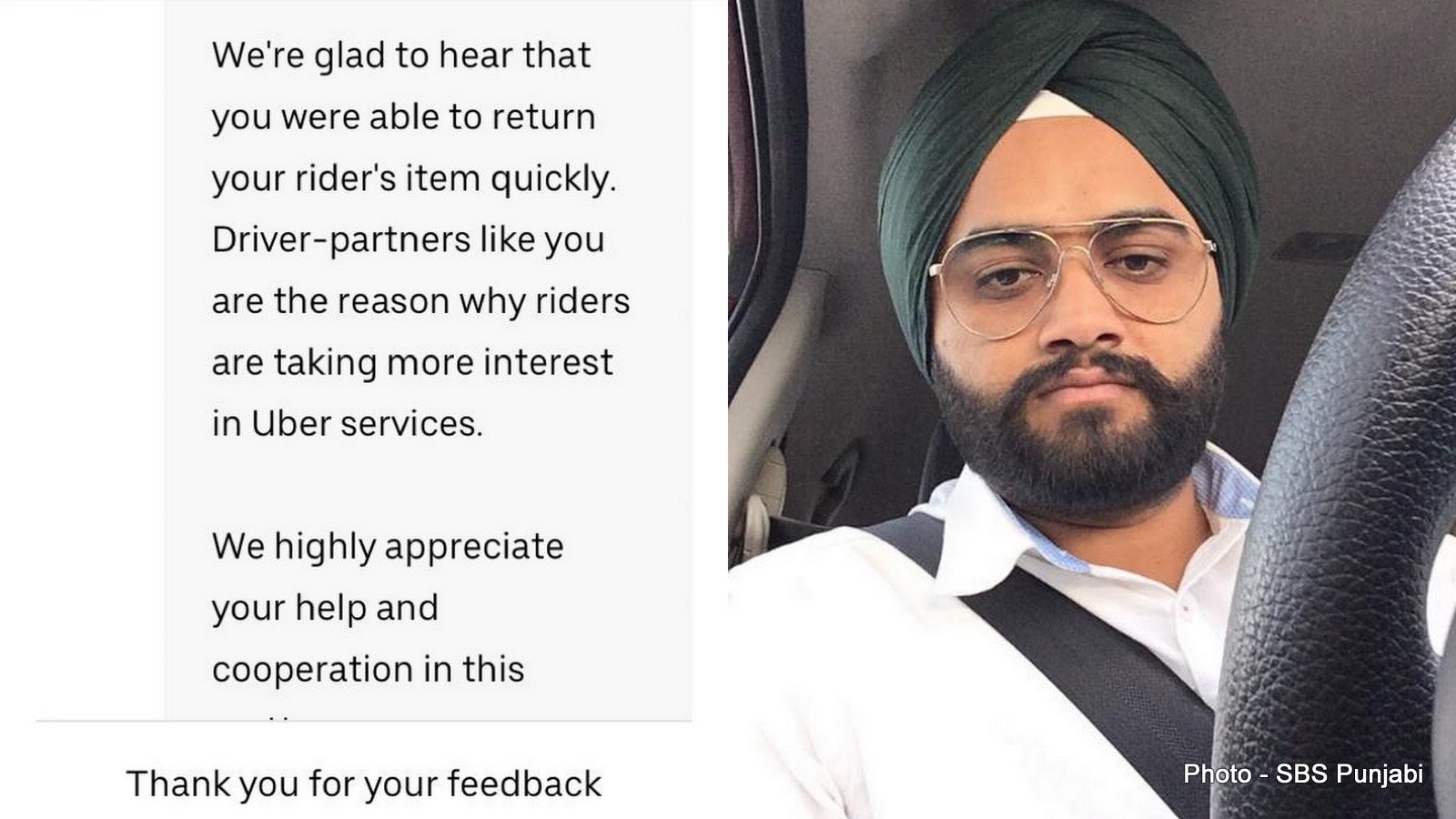 Screenshot of Uber’s acknowledgement as shared with Gurbrinder Singh on 23 October, 2019.

Mr Singh who lives in Melton, Victoria with his family, migrated to Australia from India in 2009.

While attributing his act to the Sikh principles, he added that he felt that it was in fact his duty to return the bag where it belonged.

“We must return what is not ours. It doesn’t matter if it has a value of a single dollar or tens of thousands of dollars,” he said.

Mr Singh said that he is confident that his story is not the first and it won’t be the last. 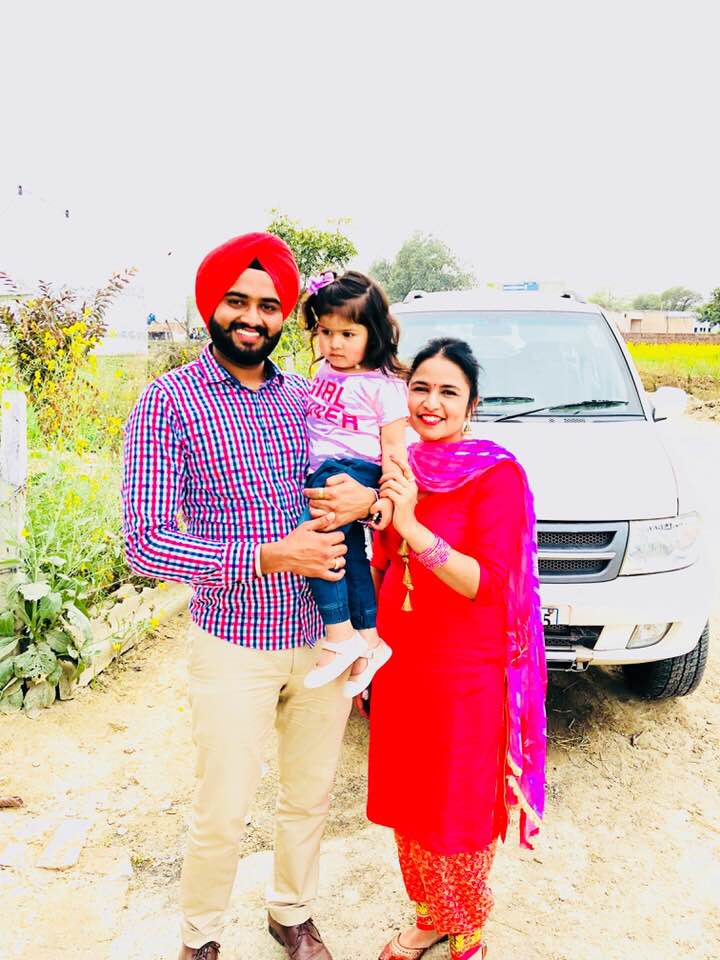 The Singh family hails from village Dhianpur in the Amritsar district of Punjab.

He said that he was sharing the incident in the hope that others too would be inspired by his actions.

“I wanted to share this story to tell people that there is plenty of good happening around us but it is just that is it is not being shared with everyone,” he added.

“At Uber we live by the mantra – ‘do the right thing’ – and clearly Mr Singh believes that too. Like the thousands of driver partners across the country he takes great pride in getting people safely from A to B and connecting people with moments, people and places that matter,” an Uber spokesperson said in a written statement to SBS Punjabi.

Our regular weekly newsletter continues this week as a commemoration to those Sikhs who fell in
action. Each soldier’s record is mapped to his village of birth on our Soldier Map of Punjab. To
view a record just click through on their name below.

Please share the list with others, and encourage them to sign up directly to our newsletters, and
help others to also learn about and commemorate the Sikhs of World War One.

The Sikh Roll of Honour: 100 Years Ago This Week 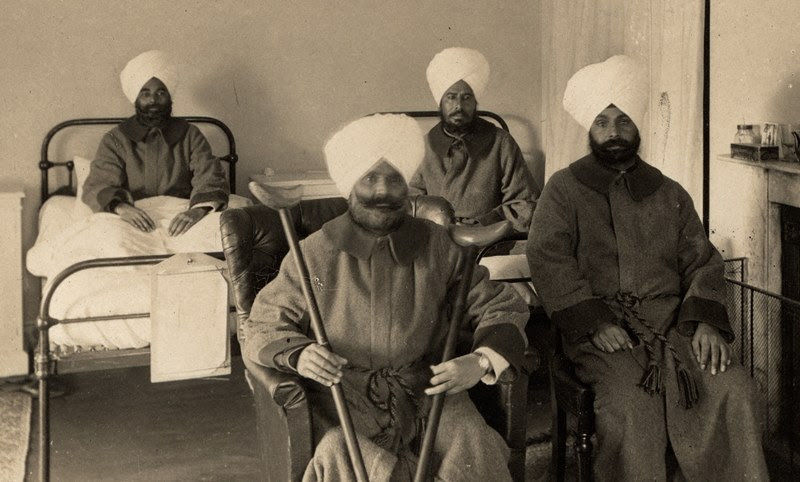 This week’s roll of honour of those who died exactly 100 years ago lists troopers who were all
Sepoys, the equivalent of a Private, but also one Follower – one of the vital ancillary men without
whom an army on the move could not function. They served and died on Egyptian, Kenyan, Iraqi
and Indian soil.

Like nearly all Sikh recruits these men mainly came from villages that dotted the fertile plains of
Punjabi. The names of their villages continue to strike a chord with those who have an ancestral
connection to them – is one of them connected to you? Click on a name below to see their record
appear on our Solider Map of Punjabi villages.

Who were these men? What is their story? Help us find out by becoming a Citizen
Historian and following our step-by-step getting started guide on how to research a WW1
Sikh soldier.

Do you have a personal link to any of them? Do you recognise your village? If yes, then
could it be that the soldier is connected to you, even possibly your WW1 ancestor?

Click on a name above and you’ll be taken to their Soldier Record where, to the bottom-
right, you’ll see the ‘Adopt Soldier1 button – click on this to begin your journey as a Citizen
Historian, helping to create a lasting memorial and legacy to the fallen.

The EFW Team
The Sikhs of World War One: With Your Help They Will Be Remembered.

The Air Force on Friday became the second branch of the U.S. military to approve the wearing of beards, turbans, hijabs, under-turbans/patkas, unshorn hair and other indoor/outdoor head coverings for religious reasons.

According to the updated regulation, “Dress and Personal Appearance of Air Force Personnel,” the Air Force allows all such apparel and beards as long as the airmen wearing them make it through a religious accommodation waiver process, that they appear “neat and conservative,” and that the apparel and beards don’t interfere with personal safety.

“Requests should normally be recommended for approval unless approval would have an adverse impact on military readiness, unit cohesion, standards, or discipline,” the Air Force wrote. “When requests are precluded by military necessity, commanders and supervisors should seek reasonable alternatives.”

The Sikh Coalition, an advocacy group which works on behalf of Sikhs and other religious minorities in the military, praised the new regulation.

“No Sikh American should have to choose between their religious beliefs and their career ambitions,” said Giselle Klapper, Sikh Coalition Staff Attorney. “Sikhs have served honorably and capably in the U.S. Armed Forces and other militaries around the world, and while we are eager for a blanket proclamation that all observant Sikh Americans can serve in every branch of the military without seeking accommodations, this policy clarification is a great step forward towards ensuring equality of opportunity and religious freedom in the Air Force.”

Friday’s regulation formalizes such waivers into a multi-step review process. As part of the process, an airman must describe the religious basis for — and include a comment on the sincerity of — the request. A chaplain must then interview the requesting airman and submit a recommendation to the wing chaplain (or the unit’s equivalent of a wing chaplain).

A staff judge advocate must also review the request package. It is is up to the wing commander (or the unit’s equivalent of such a commander) to make the final decision.

Based on the Air Force regulation, a disapproval should be based “on real (not theoretical) compelling government interest” (i.e. safety) or when precluded by a “compelling” (i.e., especially important) governmental and/or Air Force interest.

As described in sample memos included in the regulation, safety concerns might include wearing a gas mask or going within 25 feet of an operating aircraft. In such cases, an airman’s command could order an immediate removal of the turban, hijab or facial hair (although it’s not clear how much time an airman would have to shave).

There are plenty of smaller regulations detailing how religious beards and apparel should look in order to appear “neat and conservative,” the Air Force writes. For example, hijabs must be closely fitted to the contours of the airman’s head and neck, tucked under the uniform top, and cannot cover the airman’s eyebrows, eyes, cheeks, nose, mouth or chin.

Another example of “neat and conservative” is color. According to the regulation, turbans, hijabs, under-turbans or other headwear must be plain, dark blue, black, and free of designs or markings except when matching with the airman’s camouflage uniform.

Airmen assigned to units wearing a beret of any color may wear an appropriately-colored head covering as directed by the unit commander, one sample memo explains.

The same “neat and conservative” approach applies to beards, which must not exceed two inches when measured from the bottom of the chin, the regulations states. Beard hair longer than two inches must be rolled and/or tied to achieve the required length. Airmen can use styling products on their beards, but petroleum-based products are not allowed while wearing a protective mask.

For those wondering, the regulation says that “a mustache worn with a beard may extend sideways beyond the corners of the mouth to connect with the beard, but must be trimmed or groomed to not cover the upper lip.”

The Air Force is first in many things, but in this case the branch came in second to the Army, which in 2017 became the first military branch to grant religious exemptions for beards, turbans and hijabs. The Sikh Coalition said the Air Force regulation closely resembles the Army’s. The Coalition said both changes were influenced by a years-long advocacy and litigation campaign by the Coalition and its pro bono co-counsel at McDermott Will & Emery.