Washington D.C. – SALDEF is excited to announce the launch of the first ever National Sikh American Survey. The survey will capture details on demographics, political affiliation, opinions on social issues, personal experiences and behaviors of the Sikh American community. Upon completion of the survey, SALDEF will create a report that will be made available to the Sikh community, researchers, educational institutions, government, private and the non-profit sector. The survey will also be used to guide SALDEF in tailoring decision making on advocacy, programing and outreach for the community. 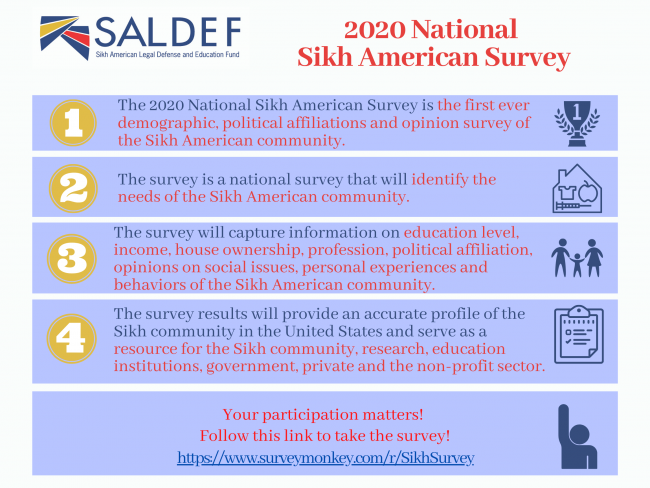 “The National Sikh American Survey is the first of its kind and will be critical in tailoring SALDEF to the needs of the community,” said Kiran Kaur Gill SALDEF Executive Director. “SALDEF’s fundamental goal is to ensure that we are providing the resources needed for the community to excel.  This survey will not only help us with our programming but also help to ensure the wants and needs of the community are heard by decision makers.”

The survey is currently open.

It is open to Sikh Americans 13 years and older.

Amritsar, December 6 – Glaring difference of opinion on the definition of “Sehajdhari Sikh”, prepared by the SGPC executive committee and panel of experts may put the Shiromani Committee in the spot.

The panel of Sikh experts have clearly concluded , “A person cannot claim to be a Sehajdhari by trimming/cutting his/her beard or eyebrows in any manner”. The meeting of the panel, held here on December 4 was necessitated when objections were raised on the definition of Sehajdhari, passed in the executive committee meeting of the Shiromani Committee, held on December 3 at Chandigarh. However, some members of the panel alleged the SGPC ignored the suggestions made by them at the meeting held under the presidentship of Sukhdev Singh Bhaur, SGPC general secretary and necessary amendments were not made in the resolution passed by the executive committee meeting on December 3..

Bhaur, Kiranjot Kaur, G.S.Lamba, Prof Suba Singh and Dr Jasbir Singh Sabar- all members of the expert panel of the SGPC said they stood by the definition passed by them on December 4.

To a question, Kiranjot Kaur , an SGPC member, said the resolution of the SGPC executive committee about the definition of Sehajdhari was contrary to the one passed by them (Sikh expert panel). Editor of Sikh monthly, Sant Sipahi, G.S.Lamba , one of the six members also expressed shock the executive body had ignored the recommendations , made by the experts. 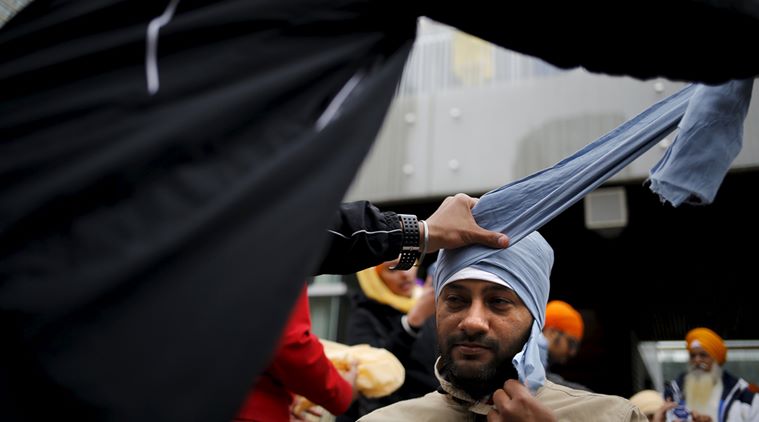 The SGPC executive committee had reiterated the definition given in the Sikh Gurdwara Act 1925, according to which the Sehajdhari Sikhs are those who are born in non-Sikh families, but follow the tenets of Sikhism. A Sehajdhari Sikh is thus a non-Sikh who performs ceremonies according to Sikh rites; who does not use tobacco, does not consume halal meat in any form; who is not a “patit” and who recites the mulmantra of Guru Granth Sahib.

In the resolution passed at a meeting held this evening, the SGPC pointed out the definition of Sehajdhari given in the Section 2 (10-A) of the Gurdwara Act states the word “sehajdhari” consists of two words “sehaj” (slowly) and “dhari” (adopt a religious path) and hence these are those novices who slowly move on the path of Sikhism to adopt its doctrine, ethics and tenets.

However, Lamba and Kiranjot Kaur alleged such a definition passed by the SGPC executive body would have far-reaching effects .

Sabar, another member of the expert panel said the definition of Sehajdhari, passed by the experts should be accepted in toto.

Washington, DC— The Sikh American Legal Defense and Education Fund (SALDEF) released their landmark study on the Sikh American community inside the United States: 2020 National Sikh American Survey. SALDEF conducted this study to understand Sikh Americans’ experience and highlight the success and prosperity that contribute to its growth and development as Americans. With the results, SALDEF will better support the community’s needs through tailored programs and advocacy.

Sikh Americans have lived in the United States for over a century; however, limited information is known about the Sikh American community. While a few studies have documented critical aspects of the Sikh American experience up to this point, there has not been a national survey that measures the multiple facets of the lives of Sikh living in the United States. The report begins by explaining the methods used to create, advertise, and implement the survey. It then details the most important findings of the survey. The report concludes with the seven recommendations based on the survey’s finding that policymakers, researchers, foundations, new organization elected officials, and Sikh organizations will find useful to understand Sikhs across the United States.

SALDEF conducted this study to understand Sikh Americans’ experience and highlight
the success and prosperity that contribute to its growth and development as Americans.

The survey results cover seven main topics; demographics, Sikhism at work and school, cultural connection, political engagement, use and perception of the news, access to resources, and discrimination. Through the results of the survey, the research team developed seven main recommendations.

Deputy Majority Leader of the Washington State Senate Manka Dhingra said about the 2020 National Sikh American Survey, “for too long data has been missing for the Sikh communities in American. This survey is a wonderful step to us filling that gap. Personal stories are very important, but the combination of data along with those experiences is what drives policy.”

“The First of a kind survey endeavors to tell the Sikh American story and provide a demographic snapshot,” said SALDEF Board Chair Kavneet Singh. “With the 2020 election around the corner, we felt that it was critical for us to find and identify the needs of the community as well as what is their current thoughts on a variety of issues.”

Singh said, “often the voices of Sikh Americans are not heard by policymakers, elected officials, local and federal government agencies, and the mainstream media; due to the lack of general awareness, education, and understanding of the community. To address the lack of education on the experiences, perspectives, and advocacy needs of Sikh Americans, we launched this survey to provide a multitude of interested parties the means to better understand and access the unique needs and perspectives of our community.”

Kiran Kaur Gill, Sikh American Legal Defense, and Education Fund (SALDEF) Executive director said, “SALDEF’s 25th anniversary is coming up next year, and it is a key time for us to look at the issues of importance to the community so we can develop our strategic program and make sure that those issues are addressed, and the community needs are met. In addition, this survey is critical for policy makers for government agencies to secure grants and resources for the communities and also for other Sikh organizations.”

Amman Singh Seehra SALDEF Board Member said, “one of the beauties of this survey was we weren’t just lucky to get information, but we have recommendations that were based on the data. So when it comes to political engagement, it reveals how we are going to engage the Sikh American community in these conversations.” Seehra said, “we have survey results that are revolutionary and can bring us into the next days of advocacy for the Sikh American community.”

About SALDEF: SALDEF is a 20-year-old national Sikh American policy, media, and educational organization. Our mission is to empower Sikh Americans by building dialogue, deepening understanding, promoting civic and political participation, and upholding social justice and religious freedom for all Americans.