Our Director and Solicitor Advocate, Ranjit Uppal will leave Switalskis next month to take up a full-time post as District Judge. Ranjit has served as a Deputy District Judge since 2010, alongside his role at Switalskis and will now move into his new role on a full-time basis.

Ranjit has worked in the legal profession since 1995 when he joined Parker Bird Solicitors. He qualified as a Solicitor in 1997 – making him the first Sikh Solicitor in Huddersfield – and was made Partner in 2000. He later joined Switalskis when both firms merged in 2012. Ranjit has also served as President of Huddersfield Law Society (making him the youngest and first Asian president in its 126-year history) as well as carrying out Pro Bono projects in Brazil, Uganda, Paraguay and Ghana, all relating to Child Care Law. His international training has been with SFAC (Strengthening Families for Abandoned Children).  He was recognised nationally as Solicitor Advocate of the Year at the Law Society Excellence Awards in 2016.

“I have thoroughly enjoyed my time with Switalskis and worked with a brilliant team of people. Some of my colleagues moved with me from Parker Bird Solicitors so I’ll be leaving colleagues I’ve known since 1995. It’s been a very tough decision to leave, but I am very much looking forward to becoming a District Judge. I also know that the Child Care Law team will continue to go from strength to strength under Ruth Coneron’s leadership. I will always be grateful to my colleagues at Switalskis and feel that the opportunities they’ve given me have enabled me to develop into this new role”.

“It’s with a very heavy heart that we prepare to say goodbye to Ranjit, but we totally understand his decision and wish him all the very best in this new role. The Child Care Law department was one of only two, when our founder Stephen Switalski started the firm in 1993. It will remain key to our business and we’re delighted that Ruth Coneron will now lead the team and continue to develop it as an area of real strength and expertise”.

Ranjit’s new role will take effect from 30 November 2020. The Lord Chief Justice has deployed him to the North Eastern Circuit, based at Doncaster County Court as the principal court, with sittings at Sheffield Combined Court. Everyone at Switalskis thanks Ranjit for all that he has done in his time with the company and wishes him well in his new role as District Judge.

Five months ago, Sukhdeep Kaur was beaming with joy as she marched along fellow batch mates after completing the Hong Kong Correctional Services Department (CSD) training. She conquered the physical fitness test as well as tests on aptitude and basic law.

After a determined chase, she realised her dream of a donning a uniform. And in the process, she had also made history by becoming the department’s first Sikh female officer. Yet another feather in the turban for Sikhs globally.

“I had decided to join the CSD after a career talk in my high school. I always wanted to wear their uniform, I found it quite attractive,” she told Asia Samachar in an interview.

Once she had set her mind, the Hongkonger was absolutely relentless in making her dream come true.

“Then I had to pass this physical test involving 5 tasks. I trained myself for that for almost three months, running 10k and doing gym. After passing that, I went through group interview in Chinese. And then final interview. I made it through all with God’s grace,” she said.

Donning her blue turban that matched her navy blue uniform, Sukhdeep’s photo was prominently splashed in a local newspaper that reported on the 6 Dec 2019 graduation ceremony at the Stanley prison.

But why the correctional services? “No other government job allows us to keep our hair during training. Only CSD did,” she said, as a matter of fact.

Now, what she says next would help us to make sense of the above. Asked what role does Sikhi or the Sikh faith plays in her life, she replied: “Very important role. In fact, Sikhi is what I am. It’s my identity. It gives me a direction for living. It is everything to me.”

She started wearing turban on her wedding in 2017.

Sukhdeep said that the local Sikh community was delighted with the news of her achievement. “They were kind of proud and even gave me saroopa. Some Sikhs asked me how I did it? They want their kids to enroll too,” she said.

There are some 12,000 Sikhs in Hong Kong. They are part of the roughly 6% of people in Hong Kong who self-identify as non-ethnic-Chinese (NEC), according to the 2011 Population Census by the Race Relations Unit of the Home Affairs Department. Many of them are second generation born with links to India, Pakistan and Nepal.

Born in Punjab, Sukhdeep was seven when she landed in Hong Kong along with her parents and grandparents who came here in search of new economic opportunities.

On the language front, the ability to speak Cantonese – the predominant Chinese dialect – is vital.

“I wouldn’t say I am that fluent as I studied in the English medium school. I had realised the importance of learning Cantonese when I was looking for a job. Most required speaking Cantonese, so I spent some time in polishing my language skills,” she said.

She added: “Inmates and locals are surprised when I speak Cantonese as not many non-Chinese speak fluently. I’m not that fluent, but they feel it’s good enough. While locals tend to speak to me in English when they first see me but soon start speaking the local language when I reply in Cantonese.”

In an interview with a local newspapers, Sukhdeep said that speaking the local language was key to career prospects. Her hard work paid off when she got an A*, the top grade, at GCSE. Her passion to join a uniform force led her to the Project Gemstone, a community integration programme run by the police force, which offered more Chinese training. Eventually she passed the CSD job interview, conducted in Cantonese.

She can understand 95% of spoken Cantonese, but had to speak slowly and choose her words carefully as she still thought in English, she told the South China Morning Post (SCMP).

“But the first week I worked in the prison, I didn’t even know it when my superior said my name in the walkie-talkie, because he was talking too fast. He slowed it down when talking to me afterwards,” she told the newspaper. “I like speaking in Cantonese with persons in custody, because a big part of my job is communicating with them, knowing their hopes and dreams, and encouraging them to get a second life outside prisons. That’s why I want to become a prison officer too, because I believe in giving people a second chance.”

Now working in Lo Wu Correctional Institution, a place for women inmates, Sukhdeep believes her ethnic background can give her a unique edge in rehabilitating prisoners. She told SCMP: “Some persons in custody have asked me about my turban, which is a good place to start a conversation. Indians there may also feel more comfortable opening up to me in their own native language.”

For the last thirty years, Khajinder Singh had made his vocation to support the Afghan Sikh repatriates coming from Kabul and other parts of Afghanistan fleeing the perilous situation in the war-torn country.  He passed away last evening following a massive heart attack. He came to Delhi in 1990 itself when the troubles started in Afghanistan and has since then has been the ‘Man Friday’ to many an Afghan Sikh individual and family. He not only provided support in India but enabled not hundreds but thousands to go to the West, despite all odds. It is a tribute to his hard work that all Afghan Sikhs who are now visible in the UK, USA, Europe, Canada and other parts of the world, have had some association with him and his Afghan Sikh and Hindu Welfare Association through which he maintained live links with the Indian government and the UNHCR offices in Delhi.

WHEN I SPOKE TO HIM JUST A FEW DAYS BACK, PRIOR TO THE ARRIVAL OF THE SECOND BATCH OF AFGHAN SIKHS TO NEW DELHI,  KHAJINDER SINGH KHURANA told me that in view of the strenuous circumstances in which the Sikhs are coming from Afghanistan, he had postponed his trip to London to meet his family there.  He spoke to me for more than an hour and spelt out all the minute details of the arrangements that he and his team were making for the arrival of the Kabul Sangat.

He was worried about the fact that Sikh organisations engaged in the welfare of the Afghan Sikhs should not work at loggerheads with each other and to that end, he was receptive to suggestions. He had drafted an open letter for Sikh organisations calling a spade a spade and was nice enough to disclose the contents of the same, even though it was my second telephonic interaction with me.

In view of the volatile situation and with the last hundreds of Afghan Sikhs waiting in the wings for departure to India, I requested him to either reword the letter or drop it altogether. He agreed and as much as I know he did not make an issue of anything.

Working for three decades with people who have undergone a trauma of one kind or another can be a traumatic experience itself.  It is not possible to appease everyone, yet Khajinder Singh took everything in his stride.

Last year in December 2019, he presided over a meeting of well-wishers of Afghan Sikhs in Delhi, where there were invitees from Afghanistan, the USA and many from India and Delhi. Harsaran Singh of the Global Sikh Council, who attended the meet told WSN on the phone about his fond memories of Khajinder Singh’s personality. He said, “He was a very gentle and sober-minded person, full of humility. Rising from a humble background he became a well-known business person in the Delhi Sikh community.”

“While he is mostly known for his concern about the well-being and safety of Sikhs left behind in his homeland Afghanistan, few people know that he was also concerned about future of Sikhs in other conflict zones like Kashmir and the future of Sikh youth there, which he discussed during the meeting.”

“He was a very gentle and sober-minded person, full of humility. Rising from a humble background he became a well-known business person in the Delhi Sikh community.” 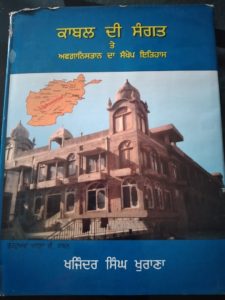 The Bhai Ghanaiya Seva Dal from Kashmir has expressed deep condolences at the demise of Khajinder Singh.

US-based film-maker Manmeet Singh, who has been part of the SaveAghanSikhs campaign, in his reaction on social media said, “Very sad news. It is heartbreaking.”

“Soon after the March 25 attack on Sikhs in Kabul, I met Khajinder Singh at a social function in Delhi. We shared concerns and took up the matter with various Sikh bodies. When I spoke to him last, he seemed overwhelmed with the problems of rehabilitation of the Afghan Sikhs who had recently arrived,” said Chandigarh-based Gurpreet Singh, President of The Institute of Sikh Studies.

Due to the COVID19 restrictions, I did not get an opportunity to meet the persona of a giant who is no more, but I hope and pray that his legacy lives on. Our deepest empathy to his family, friends and associates.

“Very sad news. It is heartbreaking.”

The World Sikh News Team hopes and prays that somebody from amongst those who have come from Afghanistan will carry on the good work that still remains unfinished as many Afghan Sikh families in Delhi are still starring at an uncertain future.