At a time when approximately 90% of the world’s children are in lockdown, we would like to introduce you to some innovative youngsters who used this unprecedented time to spread the glorious Sikh faith.

Meet Nihal Kirtani Jatha – made up of Bachittar Singh (10 years), Jeevan Hardeep Kaur (9) and Sunder Singh (12) who captivate devotees through kirtan and bilingual katha in Punjabi and English. This trio is perhaps amongst the world’s youngest to go on a full tour, just like professional kirtanis, to perform kirtan at Gurdwaras in UK and India.

All three children were born and brought up in UK, until recently when they all relocated to Punjab, India to inspire the upcoming, yet lost generations of Punjab by leading kirtan, talks and sports at Sikhi Camps held by Nihal Camps (Mata Sahib Kaur Sewewala Welfare Society).

Despite coming from the West, the children have proudly worn the Guru’s bana (appearance) since they were little tots and were taught about Sikhi from a young age. As many Sikh parents can assimilate, these children also used to get together to re-create a Gurdwara in their homes with their own throne for Sri Guru Granth Sahib ji and diwans. However, the children took their own love for Sikhi one step further, when they started sitting together singing kirtan in bliss. Being a group of two males and a female, the Jatha was formed to encourage children around the world to immerse themselves in God’s praises, regardless of their gender. We all believe children are rabh-roop (the image of God) and this becomes apparent when you hear them sing – whether they are performing in a packed historical Gurdwara like Sri Bangla Sahib (Delhi), or a lightly-attended one  – the children sing their heart out without any motive of material reward. 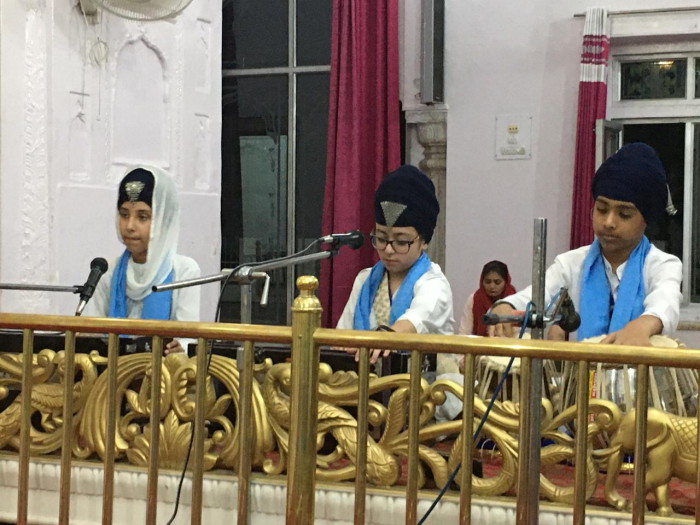 Kirtan has not only improved the childrens’ confidence, but they have also developed the quality of being dedicated to learning, singing and practicing Gurbani every day. One can witness young Bachittar Singh listening to katha, reading Gurbani from both Sri Guru Granth Sahib Ji and Sri Dasam Granth Sahib, doing rauls and sewa around the Gurughar which would be expected of an adult. Jeevan Kaur breaks all barriers holding females back, by fearlessly living her life through enjoying Gurmat, whilst Sunder Singh takes great delight in his rhythmic beats playing tabla which complements his love for sport (especially soccer!). The fun-loving trio were recently blessed with a Kirtan Tour of Sri Anandpur Sahib and Gurdwaras in the locality, producing entertaining yet inspiring vlog snippets which can be viewed on their YouTube channel.

The Jatha aspire to become more proficient in Raag kirtan and perform in every historical Gurdwara, even in hard-to-reach asthans like Sri Hemkunt Sahib. Please give Nihal Kirtani Jatha your Blessings to continue this sewa by giving them a thumbs up and following them on their social media channels:

Auckland: In the latest achievement for the nascent Sikh community in New Zealand, Suhailjeet Singh (20) has joined the prestigious New Zealand Air force as an Aircraft Technician. With this path-breaking achievement, Suhailjeet has become first Amritdhari Sikh to join this post.

Singh came to New Zealand as a 3 years old child with his parents from New Delhi and became a citizen in 2008. After his initial schooling, Singh completed his architectural diploma from Unitech.

While growing up as a youth, Suhailjeet was active in the community and he was involved in various cultural, religious and social activities. He learned Punjabi, Gurmat-Sangeet and Gatka (Sikh Martial Art) at Gurdwara in New Zealand. He has interest in supporting many social causes and he recently been involved in raising awareness regarding Post-traumatic stress disorder on Social media. His father Teja Singh, mother Amrit Naina Kaur and brother Ajit Singh have played a very supportive role in his journey so far.

Due to his hard work, he has been selected for the post of “Aircraft Technician”. This will give him the opportunity to go through many advanced courses at the facility and will become a full-fledged professional Air Craft Mechanic. After the completion of this course work, he will be in charge of servicing the Aircraft before its take-off and the post landing.

New Zealand Air force gives complete freedom to the employees to follow their own religion and the outer appearance.

Being a Amritdhari gursikh, Suhailjeet Singh will serve the Air force with carrying five kakars along with a small badge of Air Force on the short turban.

The news of his selection has come as a great delight to the Sikh community in New Zealand. Suhailjeet’s initiative and struggle will bear fruit as his story will inspire many youngsters to pursue new opportunities in various fields.

Dr Rajwant Singh, Senior Advisor, National Sikh Campaign, congratulated Suhailjeet Singh and entire Sikh community in New Zealand for this great accomplishment. He said “Suhailjeet’s selection will open up numerous prospect of success for the Sikh diaspora, As there are so many opportunities for Sikh youngsters which go neglected.’’ He said “There’s a lot of potential in our community which needs to be channelized in the right direction, Suhailjeet’s achievement will also help in creating awareness about Sikh religion worldwide. American Sikhs wish him success in his great career ahead.’’