Martyrdom of Vadde Sahibzaadey ~ A Tribute


Kabir, I long to die; let me die at the lord’s door

Sahibzada Ajit Singh was born on 26th January 1687 at Paonta Sahib, he was named Ajit meaning invincible. He was initiated into Khalsa at the age of 12 with his family on the first Vaisakhi day, 13th April 1699. Sahibzada Jujhar Singh was born on 14th March 1691. He was the second son of Guru Gobind Singh Ji at Anandpur Sahib. He was also initiated into Khalsa on 13th April 1699.

When Guru Gobind Singh Ji with his two elder sons and 40 Sikhs reached at Chamkaur Sahib exhausted, they settled in the fortress type house of Chaudhary Budhi Chandh and decided to face the approaching enemy forces there. By the night the enemy forces (Mughal rulers and Hilly Rajput rulers those who broke the promises and forgot the swore of Quran and Gita respectively) assembled and were in lakhs.

The enemy attacked the fortress in the morning and Guru Gobind Singh Ji and Singhs kept them at bay which resulted in heavy causality of the enemy.

﻿When the arrows were not much now and the enemy started coming closer to the fortress, it was decided that the batches of Sikhs, five Sikhs in each batch will fight with the enemy hand to hand. The enemy in Lakhs and batch of five Sikhs will fight with them to engage them in hand to hand battle. The valor and courage of the Sikhs can be portrayed by this when five will battle with the lakhs.

Groups were leaving the fortress and after a heavy casualty to the enemy laying down their lives for Guru, humanity, and truth. Seeing the valiant ones giving up their lives, Sahibzada Ajit Singh Ji looked for consent from Guru Gobind Singh Ji to head outside and battle with the enemy like the remainder of the Sikhs

This proved that Guru Gobind Singh Ji did not hesitate to offer his own sons for sacrifice for the rightful cause he was fighting for.

After Ajit Singh attained martyrdom, a proud father was pleased by the valor of his son in fighting the enemy. The second son of Guru Gobind Singh Ji “Baba Jujhar Singh Ji” was watching all this from the fortress. He was seeing the heroic fight his brother had done on the battlefield. The courage of Baba Jujhar Singh Ji was at the peak.

The father who was listening to his 14-year-old son was filled with pleasure by seeing his determination. He himself armed his son and marched him with the next group of five Sikhs. No Sikh was ready for allowing Baba Jujhar Singh Ji, but his determination and love to fight and attain martyrdom made them respect his decision.

﻿Baba Jujhar Singh Ji assaulted the foe so hard that they were astonished to see the youthful contender in the front line battling so boldly that his sword was chopping down the leaders of the aggressors. The enemy had not seen this kind of battle in their life when a little youngster was acting like a lion and killing the powerful adversary power like sheep. At last, Baba Jujhar Singh was injured and attained martyrdom under the watch of his father. Loads of dead assortments of aggressors were lying around his body. 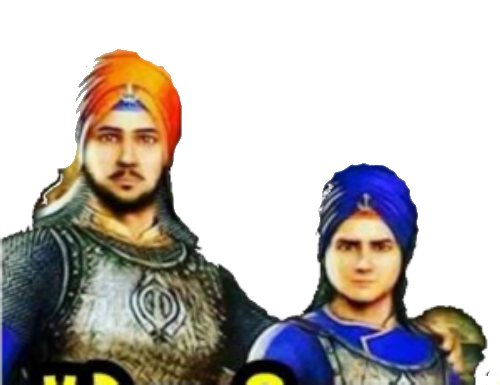 Guru Ji again thanked Akal Purakh that his younger son also met with the expectations of his father and made Khalsa Panth proud.

Guru Ji Sacrificed his two elder sons proving that when it comes to making sacrifices for true cause, he would not hesitate to offer his own sons to show to the world that the Sikh ideals alone, and not his own sons, were dearer to him.

Sahibzade’s sacrificed their lives for the nation making the bricks of the nation stronger.
They are the pillars of Sikhism, the Nation, and True values.

A martyr is one who chooses to suffer death rather than renounce his faith. 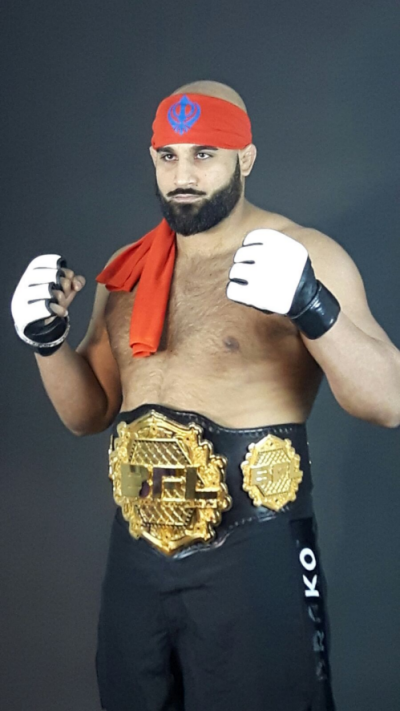 Bhullar, was in Phoenix, Arizona, one month prior to his upcoming bout, because he intends to deliver much more than a victory. He visited several places including Gurdwaras to reach out to the community.

He has made a partnership with the National Sikh Campaign to use his sporting event to increase awareness and education about Sikhs, and what the Sikh turban represents. In addition, he is hoping to increase the interest and representation of the Indian community and other South Asians in this sport.

Arjan said, “I feel that it is important for me to use my platform and my career in mixed martial arts to transcend beyond sports. I want to light a fire and break down barriers for my community, and ultimately inspire Indians across the globe. Every culture has their sports icon. I hope one day I can be that icon for the South Asian community”

Arjan added, “It’s important for me to wear my turban into the ring. Around the world, people do not know what Sikhs stands for and what our turbans stand for. We believe in equality for any gender, caste, race. Throughout history, we have been fighting for that as a people and the turban signals a readiness to protect those values. It’s important for me to represent where I come from and what my people are all about.”

Phoenix is also a significant as the first post 9/11 hate crime happened in Mesa to Balbir Singh Sodhi, a Sikh man who was murdered for wearing a turban. Bhullar met with the Sodhi family on Friday, March 16.

Anjleen Kaur, a leader in the Phoenix Sikh community and the Phoenix lead for We Are Sikhs, said “Arjan is engaging and motivating our youth in a way we haven’t been able to before. Our Sikh kids have never seen a successful athlete in the USA with the same skin color as them, with the same values as them and who speaks the same language as them. For me, Arjan is more than just a UFC fighter, he is a role model to my children and a positive example that you can do anything that you dream to.”

The UFC fight (airing on FOX 29) is scheduled on the Sikh holiday of Vaisakhi, which celebrates the founding of the Sikh community known as the Khalsa. Bhullar sees this as a powerful and momentous date to represent the community to help raise awareness for the world’s 5th largest religion. Over 300 hate crimes have been reported against Sikhs in the US since 9/11 and a reported 60% of Americans are not familiar with the Sikh faith. National Sikh Campaign ran an ad campaign on Cable TV networks coupled with grass roots events across America last year to increase awareness about Sikhs in the country. Its campaign caught the attention of the top PR industry network and was awarded top PR award recently. NSC had engaged top marketing and strategy firms to increase the increase the effectiveness of its positive message. 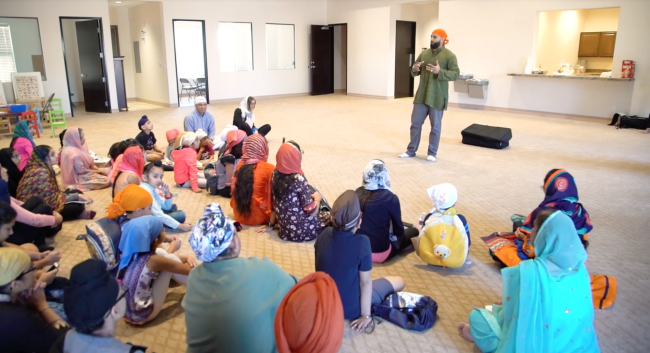 Arjan was forbidden from wearing the religious head ware for debut fight against Luis Henrique last year. Fighters must wear sponsored clothing but Bhullar, 31, and Reebok had not agreed upon a personalized turban. He reached an understanding with his sponsors after the fight and Reebok and the UFC have both been receptive. Bhullar had also represented Canada in wrestling at London 2012. The Canadian became the first Indian-born fighter to win in the UFC after beating Luis Henrique in September.
video 1
video 2
video 3

A Day in Espanola – Interview with Kirin Kaur