“I want to share about how Sikhi was my form of inspiration. As a kid I grew up with a lot of difficulties personally and with my family. I faced issues of not having much diversity around me and racism as well. One thing that kept me going was doing NitNem and doing a lot of Paath. When my brother and sister were feeling down, I would take them up to my room and we would read some Banis together. Doing this would give us so much peace, and make us forget about what was going on. It gave us hope and a connection to something bigger than ourselves. Throughout my life if I felt lost or confused I would always turn to Sikhi. I found that the things

A sign in the back of the comedy club boasted that many of the comics who performed there had also appeared on Letterman and Leno. It was “new talent” night, and I watched people quickly fill the seats. As the show progressed, I was worried that I might be heckled— especially by a group of rowdy boys who laughed sarcastically when jokes failed. When their comedian friend took the stage, some of them got up and roared. I wasn’t sure how I would handle the crowd if they shouted over me. When the comic stepped down from the stage, his friends kept yelling his name, even when the emcee tried to tell a joke. 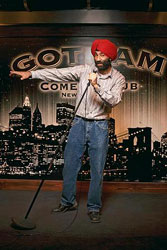 The emcee didn’t command any authority. He waited for them to calm down before he introduced me: “Our next comic is very funny. He’s a regular American, a slice of Middle America, someone who came right out of ‘Leave It to Beaver’.”

I tried to take the mike off the stand, but pulled it so hard that the stand toppled over. I caught it just in time and began right away: “Let me explain the turban.” I pointed to my head, paused for a second, and widened my eyes and let them roam around the room. “I just came back from an extreme makeover! “When they laughed, I quickly added, “And maaaaan, do I look sexy!”

It didn’t go at all smoothly when I began performing stand-up comedy. The slicing sounds of silence in response to my jokes felt emasculating. Afterward, my friends told me that I had rushed my material, and that I was too mild, defanged almost.

I began doing stand-up to educate my fellow Americans about my religion. I wanted to show that Sikhs were not fanatical Muslims. I laced jokes with facts conveying that 99 percent of people with turbans in America were Sikhs, that Sikhism started in India 500 years ago and was now the fifth largest religion in the world. We believed in one God and equality for all, regardless of race, color, gender, religion and caste. But I was not funny.

I started reading books on stand-up comedy. After performing on each new-talent night, I stayed till the end to watch other comics and studied the audience to see how each age group reacted differently. At home I watched professional comedians on Comedy Central for hours and changed my material, making it more biting and provocative.

“A lot of people ask me why I wear a turban,” goes one of my jokes. “I tell them it’s because it contracepts my vices. But you know what, turbans are great contraceptives … I haven’t had sex in five years!”

I became more ambitious. I now wanted to show the entire audience that Indians, Muslims or brown people in general were affable and moderate. Because I received my first couple of threats from Sikhs, I had to convince myself that my fellow Sikhs were in fact also moderate. But it felt strangely exciting reading the verbal barbs posted on my first YouTube clip: I was having an impact.

I e-mailed some of the overzealous Sikhs and told them that I was making fun of prejudice against those who wear turbans, not the turban itself, which seemed even more sacred now. After 9/11, many Sikhs had cut their hair and stopped wearing turbans. The menacing looks and discrimination were too much. Our visible identity in numbers was dwindling in both America and India. Bollywood films had reduced Sikhs to fools and caricatures. In America we were being taken too seriously; in India, not enough. It sometimes made me feel compelled to conform and fit in, too.

But I realized that Sikh symbols, like the turban, were important, just as all religious symbols are. And a symbol can no more be destroyed by humor than a word’s meaning can be torn by a paper shredder. The only thing one had to worry about was mitigating one’s faith, the act of countering darkness with bare-knuckle punches.

Yet religious symbols don’t always serve as a catalyst for truthful living. Wearing one for the sake of wearing it reduces religion to superstition. Sikh society and many others in India remain divided by tribalism, female infanticide and gender discrimination. So many take the religious symbols as garbs and amulets of salvation alone, rather than as a palette to paint understanding and soften the edges.

Still, I completely understood my fellow Sikhs’ sensitivity and their fear of being marginalized further. I really didn’t mind the death threats and the heckling, as long as I continued not having sex. 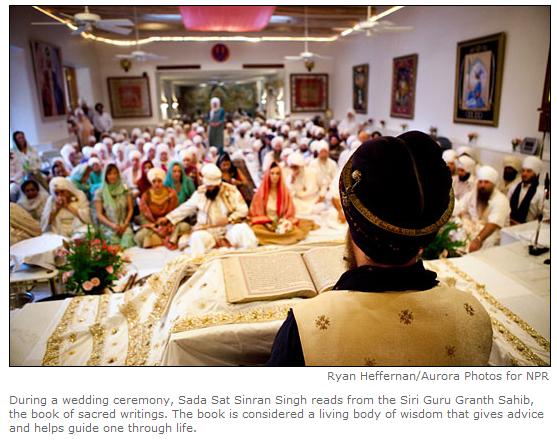 June 13, 2009 ·  In the high desert town of Espanola, N.M., you’ll find a community of American Sikhs — converts to the 500-year-old Sikh religion from India. With a gold-domed temple as a backdrop, men and women live quiet lives of meditation, yoga and vegetarianism.

They also run a big business.

Next to the elaborate temple is a cluster of drab modular buildings that constitute the headquarters of Akal Security. The reach of this Sikh-founded and Sikh-managed company is huge.

In most cities across the country, for example, the guards who run the metal detectors at the doors of federal courthouses work for Akal Security.

In just the past three years, Akal and its subsidiary, Coastal International Security, earned more than $1 billion in federal contracts. In addition to screening people at federal courthouses, Akal also guards immigration detention centers, NASA facilities, federal buildings in Washington, D.C., and embassies under construction from Ecuador to Iraq. 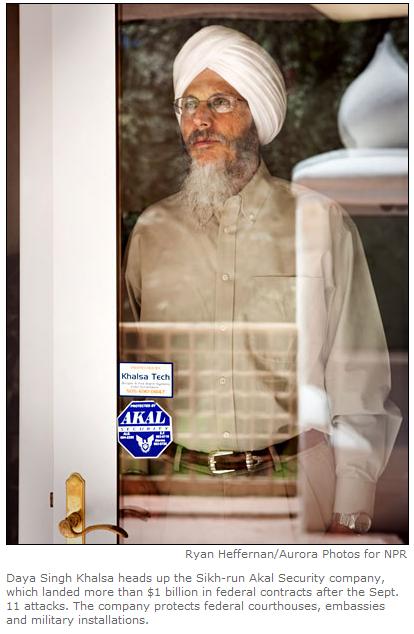 “Akal means undying or deathless,” says Daya Singh Khalsa, president of Akal Security. “It was a battle cry for Sikhs.”

Like most Sikh men, Singh Khalsa wears a turban, and on religious occasions he carries a kirpan, or sacred sword, a symbol of the Sikh warrior-saint tradition of defending the defenseless. To this day, this tradition is at the philosophical heart of Akal Security.

“We feel very good about the role we play to keep thousands or hundreds of thousands of people safe when they visit federal facilities,” Singh Khalsa says.

Yet, as president of a major security company that employs 10,000 guards, Singh Khalsa has to take pains to keep religion and business separate. “We’re here to run a business,” he insists. And because federal contracts prohibit guards from wearing headgear, you won’t see any Sikhs manning the metal detectors.

Akal is a private for-profit company. When asked where all the profits go, Singh Khalsa says they’re reinvested in the company; individual Sikhs who work for Akal make generous donations to Sikh Dharma, the nonprofit religious organization. 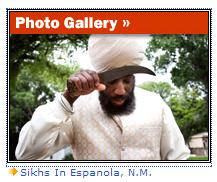 Espanola is the largest community of American Sikhs, composed of about 150 families. It was founded by Yogi Bhajan, a Sikh yoga master who came to the U.S. from India in 1968 to teach kundalini yoga. By the time he died in 2004, Yogi Bhajan was recognized as the founder and spiritual leader of what are now loosely called “Western Sikhs,” to distinguish them from their Indian counterparts.

Akal president Singh Khalsa was born Daniel Cohn, the son of a New York department store executive; he grew up in the Connecticut suburbs, graduated with an English degree from Amherst College, and drifted to the then-new Sikh colony in New Mexico to pursue his interest in yoga and meditation.

All Western Sikhs have the last name Khalsa, which means “purity.” 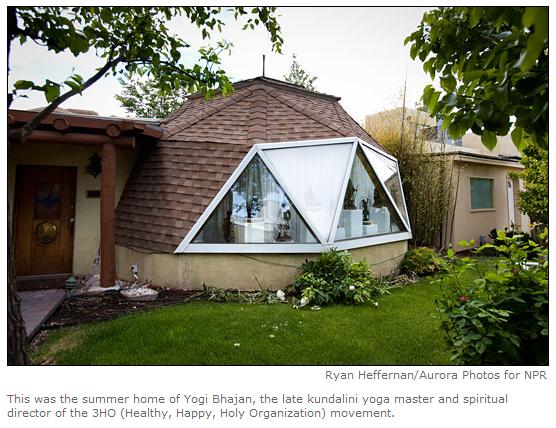 The life of a devout Sikh is rigorous: up at 4 a.m. for a cold shower, then 2.5 hours of prayers and meditation. They do not drink alcohol or eat meat. And no one gets a haircut — ever. Their hair is coiled under their turbans.

Rules that prohibit Sikhs from joining American law enforcement because they don’t cut their hair may be softening. Last year, the Espanola Police Department hired its first bearded, turbaned policeman — Officer Khalsa — though he has since moved on.

Five years after the death of their spiritual leader, the Sikh community in New Mexico appears to be healthy. Some families have moved away; others have come. Akal has lost some business, but there is always next year. And in an alcove inside the gold-domed temple, there is someone — day and night — reading the sacred songs of the Sikhs.