In this first episode Jasvir has a jubilant conversation with Guruchanan Kaur who fell in love with Sikhi through her musical background (both Jasvir and Guruchanan are co-founders of kaurvoices.org, a platform for empowering Sikh women). Guruchanan was amazed when she found that there is a religion based off music, that our Gurus themselves invented musical instruments, and that our teachings are organized in raags, showing how central music is in Sikhi.

The open conversation went on to address cultural and religious issues surrounding sexuality and the how the equality of genders taught by our Gurus is practiced today. Guruchanan Kaur, with her light heartedness, sheds light on Sikh history and the ethic of sacrificing and fighting to uphold the honor of women.

Prefer to listen as a podcast? Subscribe to the Kaur Voices Podcast here:
https://kaurvoices.captivate.fm/listen

or listen to the episodes on our web page:
https://www.sikhnet.com/kaurvoices 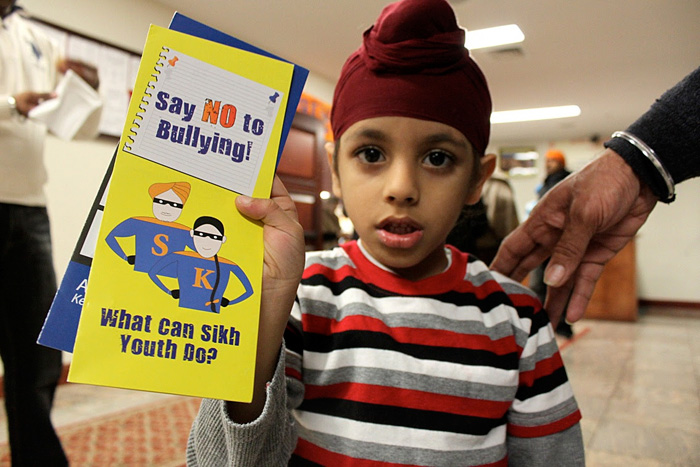 Fifty-five percent of adolescent Muslim students in California say they’ve been targeted for their faith.

29/09/2016: In a move hailed by civil rights groups, California Gov. Jerry Brown (D) announced Sunday that he’d signed a bill meant to counter the widespread bullying of Muslim and Sikh students in the state.

The Safe Place To Learn Act requires the California Department of Education to ensure that school districts “provide information on existing school site and community resources to educate teachers, administrators, and other school staff on the support of Muslim, Sikh, and other pupils who may face anti-Muslim bias and bullying.”

According to a November 2015 report from the Council on American-Islamic Relations, 55 percent of Muslim students aged 11 to 18 in California reported being bullied or discriminated against due to their faith. That’s double the national average of kids, including non-Muslims, who report being bullied at school.

“Having school site and community resources available to students experiencing bullying is a big step forward to ensuring a safer environment for our kids,” said Hussam Ayloush, executive director at CAIR-Los Angeles, which co-sponsored the bill. “We welcome the support from our governor and legislators in addressing this serious issue.”

Sikh students, meanwhile, faced similar rates of bullying. A recent study conducted by the Sikh Coalition found that more than half of Sikh children in four states, including California, experience bullying at school. That number jumps to 67 percent for Sikh students who wear turbans. In Fresno, according to the study, over half of the students surveyed said school officials didn’t respond adequately to bullying incidents.

Americans of the Sikh faith — a religion distinct from Islam — are often the targets of anti-Muslim violence, harassment and prejudice.

“Every child has the right to a safe and nurturing learning environment,” said Harjit Kaur, community development manager for the Sikh Coalition, another co-sponsor of the legislation. “This bill provides educators, students and parents with resources to help ensure that right.”

The bullying in California of Muslim students and students perceived to be Muslim came into focus earlier this year when Bayan Zehlif, a senior about to graduate from Los Osos High School in Rancho Cucamonga, discovered that someone had changed her name to “ISIS” in the school’s yearbook. Once a popular girl’s name, “ISIS” these days is more commonly associated with the terror group that calls itself the Islamic State. It’s also become a slur commonly hurled at American Muslims.

After Zehlif spoke out about against her representation in the yearbook, she says, she was subjected to harassment and bullying.

“A poster was put up of ‘We Support Bayan,’” she said, “and it was ripped down and students started to cheer.” 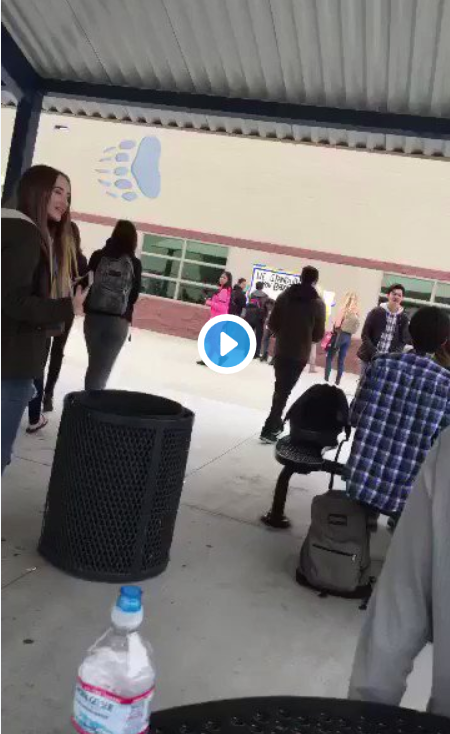 The pervasiveness of anti-Muslim bullying reflects a growing wave of Islamophobic hostility and hate crimes in California and across the nation.

A report from the California State San Bernardino Center on Hate And Extremism found that anti-Muslim hate crimes increased 122 percent in California between 2014 and 2015. The same report documented at least 260 hate crimes against Muslims nationwide in 2015 ? nearly an 80 percent rise from 2014 and the highest annual number of such crimes since 2001.

The Huffington Post has recorded at least 260 instances this year of anti-Muslim violence, harassment, discrimination and political speech.

According to CAIR, the Safe Place to Learn Act is the “first and only bill directly addressing the issue of Islamophobia in California. The negative tone in our national politics has enflamed a disturbing trend of scapegoating and fear-mongering targeting American Muslims.”

The bill, which also requires the state superintendent of public instruction to publicly post anti-bullying resources related to Muslim and Sikh students, goes into effect on Jan. 1.

The Huffington Post is documenting the rising wave of anti-Muslim bigotry and violence in America. Take a stand against hate.

Lord Bourne described occasion as “proud day for all Sikhs”

London, UK – 25 March 2017: The fifth annual British Sikh Report (BSR) was successfully launched at Parliament on Tuesday night (21st March 2017). Based on a survey of over 2,000 Sikhs throughout the country, it aims to provide robust and reliable data on the views and opinions of Sikhs as well as give a snapshot of the British Sikh community.

Hosted by Pat McFadden MP, the launch was attended by MPs, Peers, government officials, leading civil servants, representatives from a variety of NGOs and interfaith charities, and over 100 members of the Sikh community from across Britain.

According to the BSR 2017, 13% of Sikhs say they have been victims of hate crimes since the Referendum, but there is also a strong sense of duty and national pride amongst British Sikhs, with 69% of them saying they would support their son or daughter joining the Armed Forces. The BSR also highlighted that over 72% consider violence and sexism as affecting British Sikh women, whilst 84% felt that female mental health support should be provided in gurdwaras.

Other key findings relate to attitudes towards Partition in 1947, the impact of Brexit upon the Sikh community, and other issues affecting British Sikh women.

Before the event, Lord Bourne of Aberystwyth, Minister for Faith and Integration, said that “On this proud day for all Sikhs, I encourage everyone from the community to embrace the findings of the report and to continue to work hard to improve all our communities.”

At the launch, the Lib Dem peer Lord Dholakia commended the BSR 2017 for its “recognition of the issues that need to be tackled by the Sikh community.”

Slough MP Fiona Mactaggart congratulated the BSR team “for consistently producing this report. It should not be given up, because it produces information that can change things.”

The Shadow Chancellor John McDonnell MP acknowledged the challenging questions asked by the BSR 2017 and said that “it takes a bit of courage sometimes to address a number of these issues, but it’s important to have this information.”

The Chair of the All Party Parliamentary Group (APPG) for British Sikhs, Rob Marris MP, congratulated our Chair Jasvir Singh for receiving an OBE in the New Year’s Honours List and gave an update as to the work being done by the APPG. 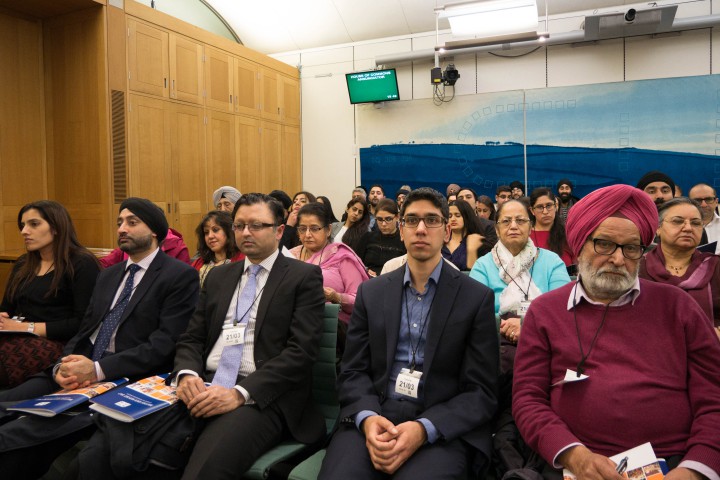 The evening concluded with an opportunity for the attendees to network with each other as well as speak to the accomplished team behind the BSR 2017.

Following the proceedings, some of the BSR team members spoke at length to the armed police officers standing guard outside Portcullis House and discussed issues regarding safety in London. The events that took place at the same location less than 24 hours after the launch of the BSR 2017 have shaken many BSR team members and attendees at the event, and their thoughts go out to the victims of the appalling attack at Westminster.

Notes to editors:
An online questionnaire was created by an independent team, using societal and community-based knowledge of issues affecting the Sikh population. Academic bodies, third sector organisations and various corporations were then invited to give their input on questions within the report, before it was disseminated to the wider Sikh population.

The British Sikh Report is available to download from www.britishsikhreport.org.

A full video of the launch event can be seen below:

The photographs are credited to Gagan Singh Sadana.

“I am pleased to see the launch of the latest edition of the British Sikh Report. Now in its fifth edition, this document captures the ongoing changes in demography amongst the Sikh community in the UK.

However, this survey is more than just a Sikh census. Its launch in our Parliament today is fitting, as this is a tool, I am sure, which will inspire Sikhs of all generations to become more and more involved in the political process, from engagement with political leaders, to running for office.

Sikhs have always been active in their local communities – reaching out to all ethnicities and faiths – and I am confident that Sikhs will be continuing this trend, and taking a greater role in initiatives that will help their communities now and in the future.

On this proud day for all Sikhs, I encourage everyone from the community to embrace the findings of the report and to continue to work hard to improve all our communities.”

“City Sikhs is one of the leading Sikh organisations in Britain. Our mission is to create positive change within society and inspire people to be the best they can be.”