How our Fears Stop us From Living as Saint Soldiers


Fear is a human condition that needs to be understood. Fear is not bad. We need it to tell us not to touch fire. This fear is good because it prevents us from harming ourselves. But fear tends to ingrains itself into our subconscious mind. If you warn a child too much you might instill too much fear in them, so that the child grows up to be afraid of their surroundings without even knowing why. Part of being a conscious adult is sorting through those messages in the subconscious mind is to sort out the wheat from the chaff. We need to sort out what really is dangerous to us, and what was ingrained in us for a very long time.

All of us have been subject to abuse from our parents. Many of us have a voice in our head from our mother or father that says, “You’re not good enough”. These messages haunt us, and then we pass it down to our children. So we need a conscious effort to identify and create awareness with this pattern. Guru is the light. When you bring light onto the fears that you have 95% of them are dispelled.

If You Have These Fears, How Can You Get Rid of Them?

In a first for the command, Air Force Special Operations Command has granted a religious accommodation waiver to a Sikh airman.

Senior Airman Dominic Varriale was granted the waiver last month, according to an Air Force release. He serves as a geospatial intelligence analyst with the 11th Special Operations Intelligence Squadron.

With the help of his command leadership and the Sikh American Veterans Alliance (SAVA), an advocacy organization, Varriale was able to expedite the approval process, which normally takes up to three years, to only three months, the release states.

“[The SAVA] sent me Air Force Instruction-approved religious articles of faith such as my operational camouflage pattern-colored turban,” said Varriale, of Long Branch, New Jersey. “They also made it possible for me to speak to a Gurdwara [a Sikh place of assembly or worship] back in my hometown to get a proper letter of sincerity from a Sikh Temple.”

Lt. Col. Brian Lightsey, commander of the 11th SOIS, said Varriale welcomed the news when he found out about the approval June 7.

“His reaction was immediate: It was part relief, part a sense of pride, but most importantly, it was evident to everyone in the room that it meant a great deal to him,” Lightsey said. “Senior Airman Varriale was always a capable analyst beforehand, but I sincerely believe the practicing of his faith has provided the extra motivation to hone his craft as a mission analyst and to improve as an airman.”

Varriale thanked his command for its support. “My command has been extremely supportive every step of the way,” he said in the release. “For a long time, the military had a more ‘mind your business’ attitude. With recent [diversity-focused] changes, there is a much larger interest in my religion and people are not afraid to ask and learn more.”

In February, the Air Force updated its dress and appearance policy, creating a comprehensive process for airmen to request waivers for religious apparel such as hijabs and turbans or facial hair worn for religious reasons. The policy update requires that airmen keep their appearance “neat and conservative.”

The Pentagon first released a policy in 2014 outlining how religious service members might apply for a waiver to wear otherwise-prohibited items — such as a turban, headscarf or beard — as a way of expressing “sincerely held beliefs.” The policy states that such accommodations will be granted on a case-by-case basis and can be denied if the request is seen to interfere with wearing a uniform or helmet, or pose a health or safety hazard.

Since then, the Army has led the services in granting allowances for religious troops. In 2017, it streamlined the process for Muslims and Sikhs to obtain waivers to wear beards, turbans and other religious headgear. While troops are required to receive case-by-case permission at the brigade level, the waivers, once approved, are now permanent throughout the soldier’s career.

The Air Force has granted several religious waivers over the years.

Officials told Military.com in November 2019 that the service had just approved a sixth airman to receive such a waiver for his Muslim faith. It was granted to Staff Sgt. Abdul Rahman Gaita of the 821st Contingency Response Support Squadron at Travis Air Force Base, California.

He was also allowed to wear a necklace and bracelet in observation of his Sikh faith, the release added.

Airman 1st Class Harpreetinder Singh Bajwa, an active-duty crew chief at Joint Base Lewis-McChord, Washington, was granted the same religious accommodation in accordance with Air Force policy in June 2019. In 2018, the service also allowed Capt. Maysaa Ouza, a Muslim JAG Corps officer represented by the ACLU, to wear a hijab.

“No Sikh American should ever have to choose between their faith and career,” the group said in a statement provided to Military.com. “It’s important to see Senior Airman Dominic Varriale become another proof-positive case study that Sikh articles of faith do not pose barriers and another meaningful step toward further ensuring equality of opportunity and religious freedom in the Air Force.”

Varriale was introduced to the Sikh faith during a trip to New Orleans in 2018.

Growing up in a military family led him to join the service; his father was an Army warrant officer, and worked as a medical evacuation pilot and in military intelligence for 14 years, the release states.

“The Sikh values and religion are anti-tyranny and anti-oppression,” Varriale said. “Good morals are a huge principle within Sikhism, and the Air Force has only doubled-down on it through our core values.

“Nothing I do religiously gets in the way of my job, which is the American way,” he said.

© Copyright 2020 Military.com. All rights reserved. This material may not be published, broadcast, rewritten or redistributed.

On a day when Sikh soldiers from the Battle of Saragarhi are commemorated for their bravery, Melbourne-based descendants of Captain Ishar Singh remember him as a pioneering Sikh soldier who won a Victoria Cross- the highest battle honour in the British Empire.

“I told my daughter that it is important that we remember the stories of valour and pride that our forefathers shared with us,” said Mr Singh.

“We’re from the family of the legend named Ishar Singh, and we believe he was the first Sikh soldier to receive prestigious Victoria Cross.

Gursharan Singh took his daughter to the Anzac Day dawn service in Melbourne earlier this year.

Ishar Singh (then 25) was a Sepoy in the 28th Punjabis, Indian Army during the Waziristan Campaign when, on 10 April 1921, he displayed remarkable gallantry for which he was awarded the Victoria Cross.

“Each year on 12 September, we remember the sacrifice of 21 Sikh soldiers who were led by Havildar Isher Singh. But some people out of ignorance share our great grandfather Captain Ishar Singh’s photographs,” he adds.

“They both had the same name of Ishar Singh. Their circumstances and the act of valour is also quite similar given they fought with bravery despite being outnumbered against the tribesman fighting for the British army in the same region.” 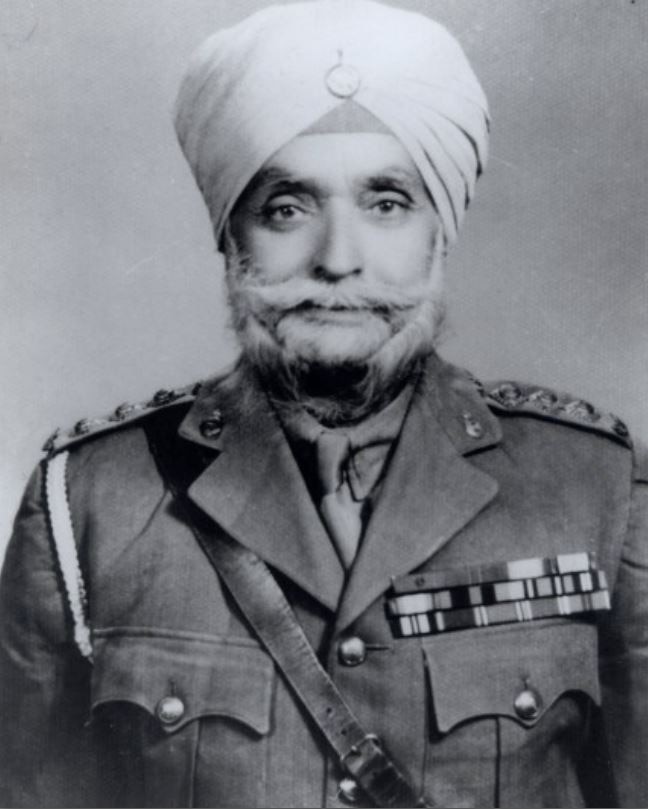 Captain Ishar Singh is the first Sikh soldier to win a Victoria Cross.

The family claims that Sardar Bahadur Capt Ishar Singh is the first non-British soldier to receive the Victoria Cross for his acts of bravery during a military campaign – this claim is yet to be verified.

But there is no doubt that his valour was duly acknowledged in newspaper reports back in 1921. The details published in the London Gazette of 25 November 1921.

The citation depicting the bravery that led Ishar Singh to Victoria Cross was published in a supplement to the London Gazette of 25 November 1921.

The Waziristan campaign was a military campaign conducted in Waziristan by British and Indian forces against the fiercely independent tribesmen that inhabited this region.

These operations were conducted in 1919–20, following the unrest that arose in the aftermath of the third Anglo-Afghan War.

Ishar Singh later attained the rank of captain and also served in the Second World War.

In addition to the Victoria Cross, he was awarded the prestigious Order of British India, First Class, which carried with it the title of ‘Sardar Bahadur’.

See this Video: Sikhs and the Australian Army