Hair for a Sikh, an African American, and a trichotillomaniac


Kes is an important part of the Sikh identity but it also carries
social, cultural, and political meaning for more than just Sikhs.
Recently, a film student from NYU explored this less explored
cross-cultural perspective by speaking with 3 individuals from various
backgrounds in an interesting (and short-18 minute) documentary. 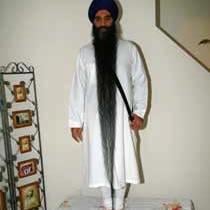 A Surrey teacher’s fantastic facial hair may soon earn him a world record for the longest beard.

Measuring about two metres in length, Sarwan Singh’s face coat would trip him up if he didn’t keep it under wraps or throw it over his shoulder, says Dr. Pargat Bhurji, also a bearded Sikh and an organizer of an event tomorrow night in Surrey to try to find a record-setting man veil.

The record is now held by Shamsher Singh of India with a beard last measured at 1.83 metres.

Friend Avtar Gill says Singh will be tough to beat, but it was also a challenge to convince the devout Akal Academy teacher and father of two to put his beard forward for the hirsute honour.

Singh wraps his beard and conceals it from view at the Sikh school, said Gill, concerned that he would be seen as improperly flaunting what Sikhs believe is part of the human body and therefore sacred.

“[The beard] is gifted by God. It’s not his own creation,” said Gill.

Singh himself told The Province yesterday that he considers the beard “more important to me than any other body part” and would sooner lose his head than shave it off.

Bhurji described Singh as a “very humble and pious man” who is respected worldwide as one of the very few learned Sikhs permitted to sing in the Golden Temple.

Between 150 and 200 people are expected to show up for the beard-off and the event is open to all who wish to put their Grizzly Adams jaw shrubs up for consideration.

“There may be someone else with a longer beard [than Singh’s], but we don’t know,” Bhurji said.

Anyone who wants to show off their full beards, goatees, chin strips, soul patches, chin curtains or mutton chops can do so starting at 5 p.m. at the Akal Academy, 204-12639 80th Ave. in Surrey.

The importance of hair to the Sikh religion will also be discussed.

The world record for the longest beard ever belongs to Hans Langseth of Norway, who died with Rapunzel-esque jaw rope measuring about 5.4 metres.

The longest beard on a woman was a 36-centimetre shoulder tickler belonging to circus “bearded lady” Janice Deveree, who set the record in 1884.

When YouTuber FTD Facts posted a video about Sikhism he didn’t know he’d get the response he did. Titled ‘Surprising Facts About Sikhism’ the original video currently boasts over 228 thousand views. Many viewers requested a follow up video on the same theme.

The host explains in the video below before he shares more of his understanding of Sikhism (which includes explanations of Nishan Sahib, Langar, Equality of Sexes, Guru, Khalsa Panth, Guru Granth Sahib, Miri Piri, Gurmat, Gurmukhi, Ik Ongkar etc.)

“Despite being one of the largest religions in the world, Sikhism remains largely unknown and almost mysterious in many parts of the world. This lack of understanding and knowledge has created many stereotypes pertaining to the sikh religion so hopefully I’ll clear some of that up in this episode…”