The following is a very important circular from the Indian Army issued way back in 1975 saying that every Sikh soldier joining the army will have to give an undertaking that if he will cut his hair or trim his beard or moustache, it will be treated as disobedience and will make him liable for disciplinary action.

The circular also states that those who have short hair may be recruited in the army, but they â€œwill however be required to sign a certificate to the effect that while in service they will grow hair, beard and moustache as per customs of SIKH religionâ€.

This meets a long-standing demand of the Sikhs and it is now up to the SGPC and other Panthic Organisations to get this mandatory policy decision implemented to its fullest. 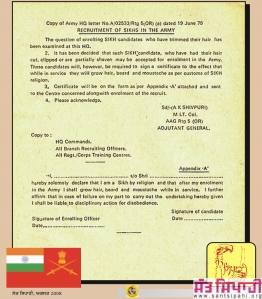 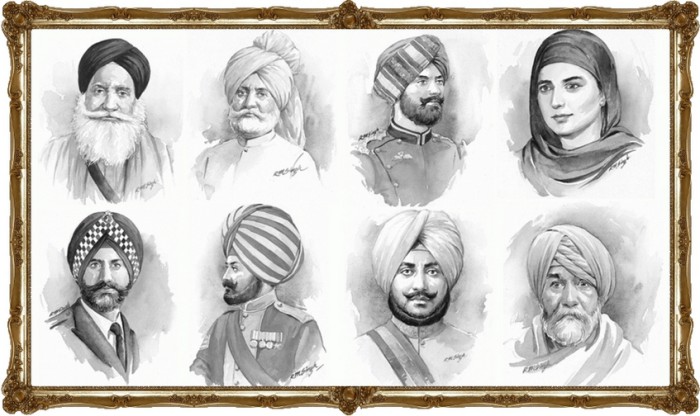 August 8, 2012: Bridgewater, New Jersey- I was sitting near the boarding gate of my ‘Air France’ flight to the United States. A man of seemingly European origin made himself comfortable on the bench close by. He had been staring at me in a strange way since the time I noticed his presence. After a brief smile, he came up to me and explained the reason behind his behavior. Why do you have that thing on your head? He asked. I was glad of his interest and answered him enthusiastically. This was the first time I was confronted with this kind of question. Little had I known that it would become the most frequent query once I left India – asked by known and strangers alike, a zillion times. So, why do I wear a turban? What are its significances, advantages and limitations? Here, I try to answer some of the most frequent turban queries.

Sikh turban is an article of faith that has been made mandatory by the founders of Sikhism. It is not merely cultural paraphernalia. The symbolisms of wearing a turban are many from it being regarded as a symbol of sovereignty, dedication, self-respect, courage, devotion, and style, but, the foremost reason all practicing Sikhs wear a turban is just one – out of love, obedience and commitment to the wishes of the founders of their faith. The turban is deeply intertwined with the Sikh identity and is a manifestation of the mission given to all Sikhs – to fearlessly stand against tyranny and protect the downtrodden. Wearing a turban ensures that no Sikh can hide in the crowd and escape this responsibility. Turban was included in the Sikh dress code contrary to the prevailing diktat that only the superior class could wear a turban. The Sikh prophets sought to uplift the subjugated and make them the equals of the highest of the high. They diligently worked to create an egalitarian society dedicated to justice and equality.

Sikh turban has an immense spiritual as well as historical significance. Just being exposed to this royal attire brings about changes to person’s attitude and psyche. It is a popular belief in northern India, where most Sikhs come from, “Anything anyone else can do, a Sikh can do better.” In a country diseased by poverty and teeming with beggars, no Sikh can ever be found stretching out hands for alms. In a swarm of people, a Sikh is always expected to act as a leader and fight oppression. At the same time, turban brings a great deal of responsibility. It provides Sikhs with a unique identity and unwanted attention. This means that Sikhs are accountable for each and every action since there is no hiding. Zeal and Courage are must to acknowledge being different, to be singled out in the crowd, and hence easily recognizable and accessible. A person’s actions are no longer just tied to him or her; they are visible to everyone, which helps in becoming more disciplined and virtuous.

Turban has indeed become synonymous with Sikhism. In the western countries, 99.9% of the people who wear turban are Sikhs. Yet, other religions have similar tenets. The turban’s importance can be found in just about every culture and religion, starting with the ancient Babylonians to western religions such as Judaism, Christianity, Islam, and several eastern traditions. The Old Testament proclaims, “Once they enter the gates of the court”, implying God’s courts, “they are to wear linen vestments. They shall wear linen turban.” From English-turban, French-tulband, Portugese-turbante, Dutch-tulbans, Romanian-tulipan, Persian-sarband, Turkish-sarik, Egyptian-pjr to Indian or Punjabi-pugree, turban has been part of every civilization. Muslim men (particularly religious elders), Afghan men, Iranian leaders, Indian men (in addition to Sikhs), men from Turkey, Palestine, Jordan, Saudi Arabia, the Arab Persian Gulf, and desert people from all over the world wear turban for varied number of reasons.

Although essentially religious, the Sikh turban, in practical terms, is not without merit. It is made to measure of fine cotton and tied daily. It fits the contour or shape of the head, and is very comfortable once habitual. Contrary to what many people think, Sikh turban is light (few ounces only) and soft on the head. Like a vacuum flask, it is an ideal headgear for both winter and summer. Even in icy winds it keeps the head and ears cozy and comfortable, while under the hot perspiring sun, it has more utility than many people would think. The turban is hygienic for anyone with long hair (Sikh men and women keep their hair unshorn) and provides reasonable safety for the head. It is fast and easy to tie and inexpensive compared to any other hairstyle one can think of. For variety and taste, pick any possible color; match it with any part of attire with a choice to sport a different head color every single day! If you thought coloring hair red or blue was cool, think again!

Due to its distinguishable nature, the turban has often been a target during times of oppression. 9/11 terrorist attacks provoked uninformed and ignorant people to carry out series of hate crimes against innocent Sikhs who were mistaken for Arabs and Muslims (to avoid misinterpretation – hate crimes against any community are equally tragic and unacceptable). The public redefined the turban as an official Bin Laden headgear and anyone wearing it, his supporter. Post 9/11, Sikhs have been targets of several hate crimes including the recent Wisconsin Sikh Temple shooting. This is the cost Sikhs continue to pay for being different. But, it is nothing new. Sikh history is rampant with such carnages, some of which have been much worse. It requires courage to face the gawking public, sometimes furious, sometimes fearful. These hate crimes are just an example, rather comfy, of the times that have shaped the Sikh character.

The turban being part of Sikhism has given me much inner strength, courage, wisdom, clear conscience, and the ability to stand up to my actions. I have enjoyed every moment of it and threatening episodes have only made me a stronger and better human being. Every time excited children gaze at me from the back seat windows of their car, I am reaffirmed of the legacy and the virtues of the Sikh identity.

‘Singh and Kaur’ ~ Poem by Ramneet