VIDEO OF THE PRESS CONFERENCE

The two television advertisements, ‘Neighbors’ and ‘Proud’ began running in the Fresno media market on June 9. ‘Neighbors’ explains the values of Sikhism and how they are similar to American values. Further, it highlights the important role Sikhs play in the community as doctors, PTA moms and patriots. ‘Proud’ further highlights how Sikh values – such as tolerance, religious freedom and gender equality – go hand in hand with American values. These ads have also been running on CNN and FOX cable networks nationwide.

During the event, Amritpal Singh, a representative of We Are Sikhs Fresno, said, “Sikh Americans have been a part of the fabric of the community of Fresno and every corner of the nation for over 115 years. We know that the United States is the greatest country on the earth and we are proud to call ourselves Americans.” 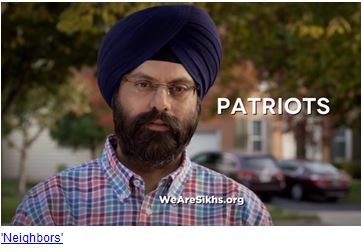 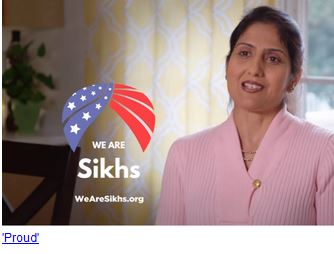 “I’m honored and proud to stand next to the Sikh community,” added Fresno Mayor Lee Brand. “If you look in our community… you look at doctors, lawyers, successful businesspeople, farmers, every aspect of life, particularly in small business. The Sikh people are family orientated, have family values that stress that the maximum achievement and embody the American Dream.”

Although Sikhism is the fifth largest religion in the world, more than half of Americans know absolutely nothing about the Sikh community. In Fresno, despite a vibrant Sikh community, Sikhs have faced a number of hate crimes in recent years, including: a Sikh being intentionally hit by a car in December 2015 and the murder of a Sikh store clerk in January 2016. Further, 54 percent of Sikh youths in Fresno and nearly 70 percent of turbaned Sikh youths in Fresno have experienced bullying and harassment.

“I am very thankful to everyone who came out today to express support for the launch of the We Are Sikhs Campaign in Fresno.” said Bill Nijjer Singh with the We Are Sikh Campaign. “Beginning June 9 we will start our television advertising and in the next few weeks, you will be seeing us in the community, helping educate our neighbors on the values of Sikhism. We are looking forward to partnering with local groups and community leaders to further inform the community about Sikhism.”

“We are very proud to launch We Are Sikhs Fresno. It is a culmination of a long and a collective effort of the Sikh community nationwide to inform about who we are and why we are proud to wear the turban, a symbol of our community’s commitment to equality and serving others,” said Dr. Rajwant Singh, co-founder and senior advisor of the National Sikh Campaign. Fresno, Selma and Visalia Sikh communities have joined this unprecedented national initiative to create better understanding of our community’s presence. We are thankful to all the Gurdwaras and Sikh media groups who have supported this massive task.”

For this PR work for Sikhs, NSC had engaged AKPD, President Obama’s media team and Hart Research Associates, which does strategy work for the World Bank, Bill and Melinda Gates Foundation and the Harvard University. In addition, it has hired FP1 Strategies, a conservative and Republican leaning marketing team which has done strategy work for President Bush’s 2000 and 2004 campaign and it has done marketing for Facebook and Ford Motor Company. President Bill Clinton’s speech writer planned and edited the content of the website WeareSikhs.org. NSC held fundraising events in 14 cities to garner support from the community and the total cost of this campaign is expected to be $1.3 Million.

The Sikh community has been the target of discrimination, intimidation, harassment and hate crimes since the 9/11 Attacks largely because of a collective misunderstanding of what the turban means in the Sikh faith. Sikhs wear the turban to show their willingness to serve others in the community and their commitment to equality for all people. 99% of individuals wearing turbans in the U.S. are of the Sikh faith.

About the National Sikh Campaign
The National Sikh Campaign (NSC) is a non-profit organization dedicated to educating the public about the many contributions Sikh Americans are making in their communities every day. Whether it’s serving multiple tours overseas, leading Fortune 500 companies, managing family farms, serving as elected officials or promoting equality and serving the local community, Sikhs put into action the values that make America great.
NSC’s mission is to ensure that more Americans can immediately recognize and understand who Sikh Americans are, what their faith is all about and how it shapes their significant contributions to American life. To learn more, please visit www.sikhcampaign.org

November 15, 2016: LOS ANGELES – A national trucking company has agreed to pay $260,000 to settle discrimination complaints by four Sikh drivers who were denied jobs for refusing to take drug tests that would have violated their religious beliefs.

J.B. Hunt Transport Services Inc. reached the settlement being announced Tuesday with the U.S. Equal Employment Opportunity Commission, according to the agreement provided to The Associated Press.

The trucking company required three men to clip their hair for drug samples and required a fourth to remove his turban before providing a urine sample, said The Sikh Coalition, which represented the men and shared the agreement.

The four California men were not offered testing alternatives and were denied jobs when they refused to submit to the tests.

Observant Sikhs never cut their hair and wear turbans in public at all times, said Harsimran Kaur, the group’s legal director. It is considered shameful and humiliating to remove a turban in public.

“It’s absolutely a challenge for observant Sikhs to maintain unshorn hair,” Kaur said Monday. “The importance of this settlement is that it sends a message to employers that even drug testing regimens do not fall outside the purview of the federal anti-discrimination law. Employers can’t proffer safety as a blanket justification to discriminate.”

J.B. Hunt agreed to revise its anti-discrimination policies and provide training on accommodating religious beliefs, according to the agreement.

The Arkansas-based company chose not to comment, according to attorney Kevin Lilly, who represented the company in the matter.

The Sikh Coalition said the case could have an impact on other trucking companies and industries. Thousands of Sikhs work as truckers in the U.S. and the group said it has also learned of technology and pharmaceutical companies that asked Sikhs to provide hair samples, which can show the presence of drugs several months after use.

Employers can generally require a certain appearance at work, even barring beards or hair styles that might be associated with certain racial groups, said Ariela Gross, a law professor at the University of Southern California. However, those rules don’t tend to hold up when applied to religious groups that require a turban or bar them from cutting hair.

“Where they’re requiring them to cut a piece of their hair for drug testing it seems odd they wouldn’t accept other types of testing alternatives,” Gross said. “That’s what makes it seem like a relatively straightforward case.”

Observant Sikhs abstain from alcohol and drug use. They never cut their hair because it’s considered to be in harmony with God’s will and is one of five required articles of faith.

One of the truckers in the case, Lakhbir Singh, who emigrated from Punjab, India, 20 years ago, said he always had submitted to urinalysis for drug tests for other jobs. When J.B. Hunt required a hair clipping for testing while he attended job orientation in 2011, he offered to provide a hair sample from his comb, but wouldn’t allow his hair to be clipped.

After losing the job, he struggled for most of the next five years to find permanent, full-time work to support his family. He now works for another trucking company.

“When they declined to give me the job, it was one of the hardest times of my life,” he said through an interpreter. “My body went numb and I had tears in my eyes.”

In this video, Guruka Singh talks about what religion actually is and what it means to be “religious”. Are we just using our religion to describe ourselves and our background, or are we connecting deeper, allowing the wisdom and teachings of our faith to positively influence our lives? If we want to better practice and have greater benefit from our religion, how can we do this? How do we connect deeper and eventually merge back with the Maha Atma (Great Soul)?