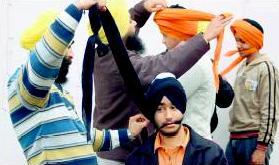 Chandigarh: Just how serious is the threat to the Sikh turban from the community’s youth, increasingly at odds with the headgear? Pretty grave, it seems.

Worried at the trend of Sikh boys shorn of long hair and sans turban, the Akaal Purkh Ki Fauj (APKF), literally meaning ‘army of God’ and with its international headquarters in Malaysia, has decided to open 100 ‘‘turban clinics across India within the next six months. The organization, which swears by technology but harps on tradition, will have experts in these clinics teaching people how to tie the ‘pagri’ in a variety of styles.

Not just that, it will also distribute CDs of ‘Turban Tutor’, a software that helps people learn techniques at home, and ‘Smart Turban’, another software that wraps in 32 different turban styles, which members have developed themselves. 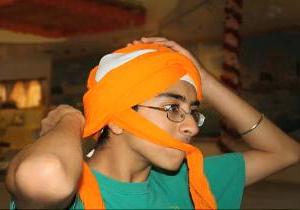 ‘‘It’s an emergency situation,’’ said Jaswinder Singh Advocate, SGPC member and director of the Turban Pride Movement (under the APKF umbrella). ‘‘By April 13, 2010, we plan to set up 100 turban clinics across the country. The intention is to motivate Sikh youngsters and kids to take pride in the turban. CDs of Turban Tutor and Smart Turban will be distributed free of cost to people walking into the clinics,’’ he said.

Advocate added that the clinics will also pass on lessons in hair care management. The Shiromani Gurdwara Parbandhak Committee, the apex body of Sikhs, has also put its weight behind the project. SGPC chief Avtar Singh Makkar said, ‘‘The turban is an integral part of a Sikh’s life. We need innovative techniques to motivate our youngsters and we will support this effort wholeheartedly. It is worrisome the way turbans are vanishing’’.

The APKF, with 80,000 members world wide, said it would do everything to make the mission a success. ‘‘The situation is quite bleak, Advocate said.

The first turban clinic was launched in Amritsar in 2006 on an experimental basis. But now branches are ready to be opened at a string of towns and cities within the next six months.

A YOUNG Sikh man taken off a Qantas flight because fellow passengers
were afraid to depart with him on board was the trigger which led
Amaninder Singh Sandhu to seek a role within police.

Struck
by the fear and ignorance of people regarding his race and religion, he
thought that one way to win the trust and confidence of the public was
to work for an agency that exemplified those qualities.

In
September 2007, Amaninder attended a police recruitment session in
Auckland, intending to be an observer. However Asian Liaison Officer
Jessica Phuang encouraged him join the session. When he raised the
issue of wearing a turban as a possible barrier to his joining, Jessica
said, “Let’s worry about that when we get there.”

The
turban has spiritual and historical significance and is worn with a
great deal of pride by orthodox followers of Sikhism. Sikhs do not cut
their hair or beards, to demonstrate they are living their lives as
Waheguru (God) wills.

That ‘can do’ attitude first
demonstrated by Jessica has typified the subsequent relationship
between police and the Sikh community as the question of uniform was
considered.

Police needed to ensure that the
health, safety and public recognition elements of the uniform were
maintained, while Amaninder and the Sikh community wanted to preserve
the essential elements of faith necessary to practice the Sikh
religion.

Both parties approached the issue with goodwill and a desire to reach common ground. 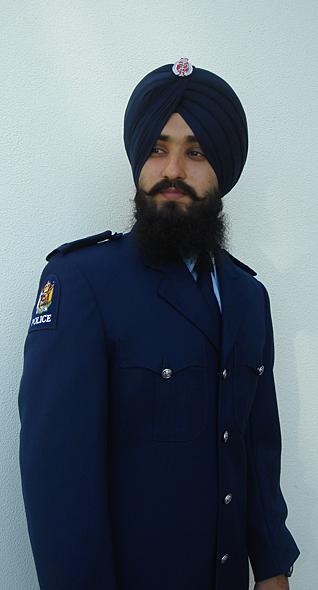 In
December 2007 the Sikh Council of New Zealand presented police with a
sample turban, correctly tied for consideration. Police confirmed that
the turban was acceptable and the process of developing protocols to
govern its use was begun by Inspector Jason Ross and Advisory Officer
Jackie Mulligan.

From that point Amaninder, the Sikh
Council, Police College and Police National Headquarters
representatives, including Superintendent Wally Haumaha, Senior
Sergeant Iain Saunders, Sergeant Rakesh Naidoo and Kefeng Chu, worked
together to find a solution to issues which arose. The understanding
and knowledge of all parties grew as a result of this process.

In
March 2008, three members of the Sikh Council stayed at the Police
College to experience first-hand the life of a recruit. They agreed to
solutions to minor problems – for example an acceptable smaller version
of the turban for use during swimming training and with the riot helmet.

Amaninder
is a trailblazer. He is the first Sikh police officer to wear a turban
as part of NZ Police uniform and the first turbaned officer to graduate
from the Police College.

The work undertaken to make the turban a part of NZ Police uniform has already reaped rewards for other officers.

Constable Jagmohan Malhi, an officer based in Nelson, was able to
return to the practice of his faith and adopted the approved turban in
September.

What a beautiful video. The joy and ecstasy of the day, filled with Guru Ji’s kirpaa, comes through so perfectly. Luckily Tanveer and Gursharan have graciously allowed SikhNet to share their video with everyone. May all marriages be so blessed!

Even though the groom had stomach flu, and it rained for most of the day,
nothing could dampen the beauty of this Anand Karaj.

The first part of the video utilizes a shabd that the bride and groom sung themselves for their own wedding. The
second song is a personal favourite of ours.

Take the time necessary to let the entire video load before you watch it.  It’s worth the wait!