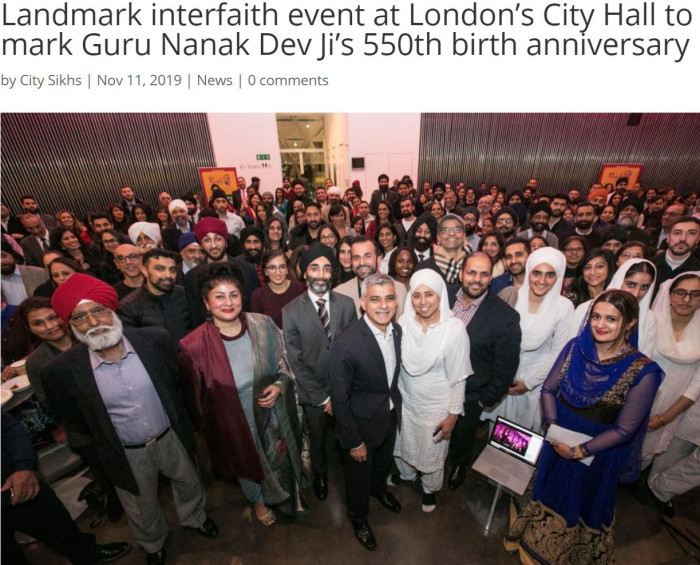 City Sikhs was proud to join a number of organisations at the Lord Provost’s offices in Edinburgh to mark the 550th birth anniversary of the founder of the Sikh faith, Guru Nanak Dev Ji. The event was all the more remarkable as it was organised by the Scottish Ahlul Bayt Society, a Muslim organisation, in order to bring together people of different faiths in the memory of Guru Nanak.

Leading figures from the faith communities of Scotland and national faith leaders from London were invited to attend and share their thoughts about the founder of Sikhi. Jasvir Singh attended in his capacity as Chair of City Sikhs, and he spoke at length about the teachings of Guru Nanak and their relevance today for people across Scotland. The keynote speech was delivered by Bhai Sahib Bhai Mohinder Singh from the Guru Nanak Nishkam Sewak Jatha. 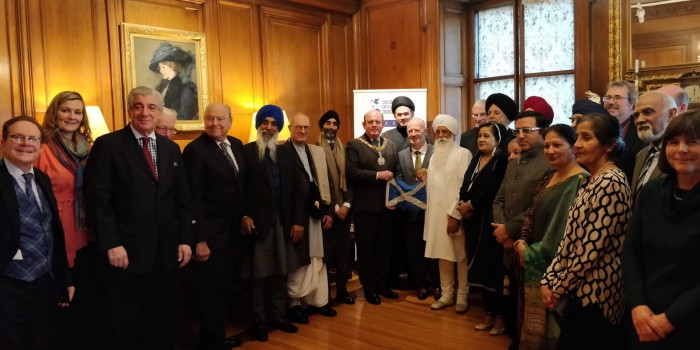 The event was followed by langar (communal blessed food) at the recently renovated Guru Nanak Gurdwara in Leith, and for some of the interfaith attendees, it was their very first visit to a gurdwara (Sikh place of worship). The day ended with stronger ties being forged between the various faiths in order to work for the betterment of society as a whole. 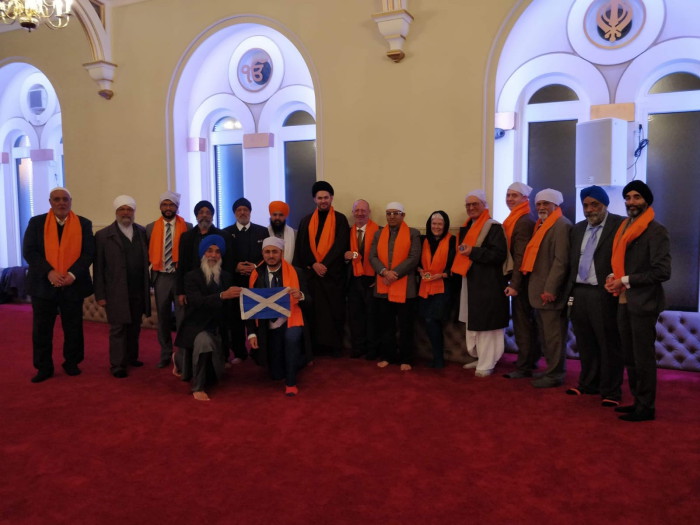 “Seeing the work of interfaith communities in Scotland is inspiring, and there has been much discussion about how the Kartarpur Corridor has changed relationships between the Sikh and Muslim communities for the better. Guru Nanak was an interfaith pioneer, but he was also not afraid of calling out religious groups and practices when necessary through the means of respectful dialogue and debate. This reception has been a fitting tribute to his legacy.”

This is the first Scottish event that City Sikhs has been involved in, and City Sikhs is working with local organisations in order to hold further events in Edinburgh in the first half of 2020.

The Scottish Ahlul Bayt Society is a faith-based organisation working to meet the needs of the Scottish Shia Muslim community and the breadth of society in general across the cultural, social, political, and religious spectra. It works to engage with other communities and faiths; strengthening ties in an effort to create a setting for religious and racial harmony, equality, and diversity in the nation. It is led by Imam Sayed Ali Abbas Razawi.

City Sikhs is a progressive Sikh charity which strives to build a cohesive and inclusive society in which individuality is respected and diversity is celebrated. We provide a space for people to connect, learn, contribute and share and help people develop their professional careers. The philosophy of Sikhi and the desire to work with other faith communities for the betterment of society underpin all of the efforts of City Sikhs.

“City Sikhs is one of the leading Sikh organisations in Britain.
Our mission is to create positive change within society and inspire people to be the best they can be.”

About 5,000 Kent Sikhs are celebrating the 550th anniversary of the birth of Sikhism founder Guru Nanak.

The event is being marked at the gurdwara in Gravesend with prayers, turban tying, martial arts and making “langar” in the communal kitchen.

The building in Saddington Street was inaugurated in 2011 and is one of the largest in the UK.

More than 15,000 Sikhs live in the area, representing over 15% of the Gravesend population.

At the scene in Gravesend

This anniversary is momentous for Sikhs as it coincides with the opening of a pilgrim route between India and Pakistan, allowing access to one of Sikhism’s holiest shrines.

The Punjab region was split during the partition of British India in 1947, but the Kartarpur corridor, which links the divided areas, opened days before the 550th anniversary of the birth of Guru Nanak, on 12 November.

It allows rare visa-free access for Indian pilgrims to the Gurdwara Darbar Sahib shrine in Pakistan.

The historic gurdwaras of India, including Sikhism’s holiest place, the Harmandir Sahib, the famous Golden Temple in Amritsar, have inspired the temple in Gravesend.

The complex has been designed with four gateways to emphasise the Sikh principle of being open to everyone.

Vice president of the gurdwara, Manpreet Singh Dhaliwal, said it was a key day in the Sikh calendar.

“It gives us the opportunity to all come together and practice key teachings such as showing compassion to others, treating everybody equally regardless of race, religion or gender and most importantly remembering god and cultivating the love within,” he said.

“He started Sikhism and we respect him,” he said. He taught us to be kind to each other.”