Arjan Kaur: Why I became a Sikh

Arjan Kaur: Why I became a Sikh

Being male or female is a matter of birth. Being a man or a woman is a matter of gender. Being old or young depends on one’s date of birth. However, being a Wisdom Seeker (translated into the Punjabi language as “Sikh”) is a matter of choice and a matter of being one. It does not require any preaching, promoting, or blasts from the media.

I spent a significant portion of my life practicing Pharmacology and Neuroscience at medical institutions. Everyone in my field knew me, and in their circles knew of my work. I rarely had to tell anyone about my identity as a pharmacologist or a neuroscientist. They knew who I was from my work, my education, my research, and most of all my daily interaction with them.

I have taken the liberty of citing my own example, at the risk of being impolite, as there are numerous other examples. I do not have to name someone like Albert Einstein. Among Sikhs I do not need to announce credentials of Sikhs like Narinder Singh Kapany, Prime Minister Dr. Manmohan Singh, Bhai Mohinder Singh of Guru Nanak Nishkam Seva, Dr. Inderjit Singh OBE, or scholar/writer Dr. IJ Singh among many many. They never hired an advertising agency to tell others who they were. People know them by their work, from their accomplishments, and above all from interaction public.

Besides our Sikh contemporaries, I recall many great Sikhs from the recent past as well. Is anyone ignorant about the religion of Bhagat Puran Singh, Bhai Chelaram, Sant Bhidranwala, Professor Puran Singh, Bhai Hira Singh Ragi, or many others?

Then why is it that our Sikh institutions today have to organize programs, publish pamphlets, sponsor lecture tours, hire media firms, or even go to court just to make our neighbors know who we are? Why do we put up billboards at substantial cost, just to articulate to those we deal with every day that we are Sikhs?

Why do we not become Sikh and act like one? The fact that Sikhs today do not stand out as Sikhs says something serious about the disconnect between our kehni and karni (words and deeds). 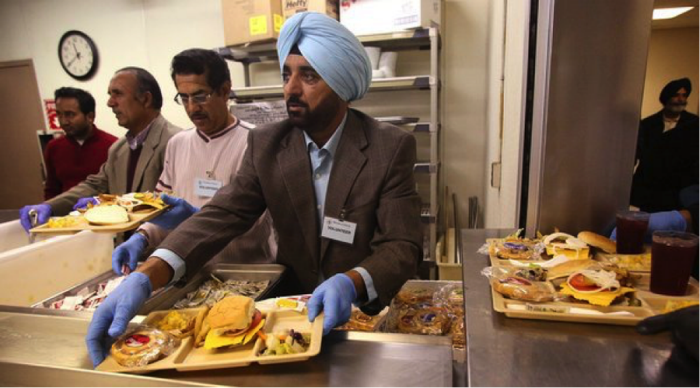 Recently the answer flashed in my mind. Kulvir Singh Gill was in Dallas the other day to speak at a fundraising event for Sikh Research Institute. In his powerful presentation, he detailed the Seva Food Bank, an organization he co-founded in the greater Toronto area. He told us that he gave no sermons to people who came for food, or to those Canadians who came to him to offer help in volunteering, or even to offer financial gifts. He described how the Canadian public soon came to know who the Sikhs were without the requirement of billboards and advertisements. Serving in the Food Bank was the secret. 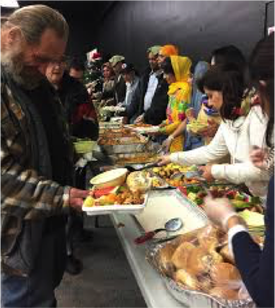 Gill cited an example of being a “gentleman” in his speech. He said if an individual has to go around telling people he is a “gentleman”, he is probably not a “gentleman”.

Some time ago, I saw a sign in a restaurant that said something like “In American society, a “gentleman” will exhibit love and respect for his friends. Often he will do so not because his friend was helpless or unable. However, because he is a “gentleman” and he wants to show his guest that she is valuable and worthy of respect.”

It is obvious that none of them will have to tell that they are “gentlemen” or intelligent men. The attitudes and actions in the public alone are effective to deliver the message.

SIKH IS A VERB

Some time ago, I wrote an article about whether the term “Sikh” was a noun or a verb. There I discussed how the word “Sikh” could be both at different times of the day depending upon whether s/he is being a Sikh at that moment or not.

When Guru Nanak traveled to new places, he never revealed what his religion was, or what would be the religious label applied to those who began to follow him. Eventually, those communities became known as Sikhs (wisdom seekers) because they were coming to the Guru seeking his wisdom. The same wisdom later came to be known as Gurmat or the Wisdom of the Guru. Sikhs always lived by Gurmat in their life practices and were prominently known to their neighbors.

I work with interfaith organizations and programs in North Texas area. Among my colleagues, the audiences at my presentations, or those I meet socially, no one asks me about my faith affiliation. They all know me as a Sikh. Some time ago, when I was in the hospital for surgery, the clergy from 22 faith traditions prayed for me. I am confident that many others could report similar experiences.

Sikhi is a dynamic virtue, and our neighbors are bound to perceive it as so. This could be rendered into English as “are called Sikh”. It would make a nice little exercise to investigate this point more thoroughly than I have done. I did write a lengthy article some time ago titled – Is Sikh a Noun or Adjective. Now I think it might even be a Verb.

GURU NANAK’S METAPHOR OF A RIVULET

I had also written earlier that the Guru Granth termed Sikhi as a “rivulet” perhaps because a “rivulet” carries water from the ocean via snow and rains to fertilize diverse lands continuously. It serves surrounding communities, and it does not require any media firm or extensive marketing to tell the neighborhood that it was a rivulet. They will not escape noticing its life giving contribution to its neighborhoods.

The Guru, the Divine Wisdom, is the bottomless ocean, and all of its WISDOM is in the form of teachings that originate out of this ocean, as rains and falling ice give birth to countless rivulets and rivers, sometimes puddles, of many lengths and depths. When drenched with these rains and rivulets, the earth is fulfilled. Those who are drenched in the Guru’s ways are exalted and grateful. 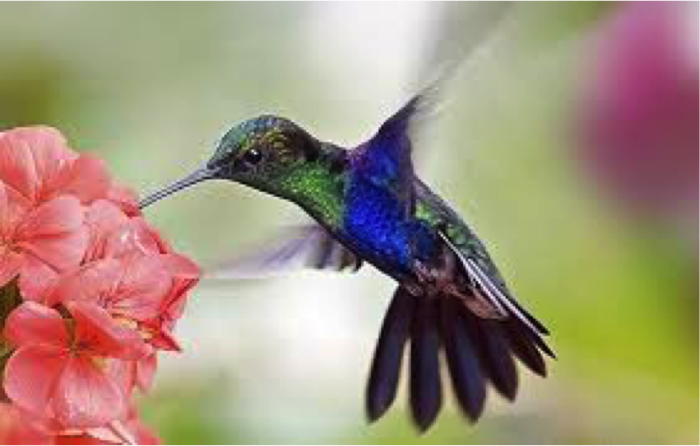 The Guru Granth also describes Sikhi using the metaphor of fragrance. In this verse from sacred scripture, Guru Nanak explains his doctrine for living: this way:

Spread your irresistible fragrance produced from cleansing the mind and the body with waters of Goodness,
followed by application of the scented oil of Truth.

The metaphor of fragrance in Sikhi is a powerful one. As Marian Bendeth said, “Fragrance speaks the loudest on a subliminal level.” Another wise man, Sheikh Saadi wrote, “Mush Anast Keh Khud Baboyad Na Keh Attar Baboyad”. He emphasized that the fragrance is capable of selling itself, along with the source that emits fragrance. Because it has inherent allure, the fragrance requires no trader, no sales force or media, to announce its presence. If it did, it was not fragrant.

In the silence of your room, in the hubbub of the melee, in the busy current of your routine, or in crises, there is surely value in reflecting on what your faith might mean at that moment. When you are comfortable with your own answer, all those surrounding you will know what your faith is, and what your commitment to it is. You will not have to go to any great length to explain your faith to anyone.

A reputation is built on what you have done, not what you have promised to do. Our current obsession with telling the world what Sikhs are is a largely fruitless exercise, and perhaps a reflection of our inability, individual and collectively, to live up to the values our Guru has given. Identifying ourselves as Sikh (or even looking like one) is largely a pointless label unless one is working towards living Sikh values– that is, our Sikhi. Otherwise, it is as if we are wearing a Halloween costume all year round (and fooling no one).

Sikhi is to be lived and is to be experienced. Our actions, not our words, need to validate our values (i.e.” gentlemen” analogy). To understand the dynamics of identifying, being and doing, from a Sikh perspective, the concept of a rivulet and of the fragrance are powerful metaphors used by Guru Nanak.

Indeed, there is much ignorance, which is leading to unnecessary fear and dangerous hate. So yes, we need to increase awareness of Sikhs and Sikhi in the public. However, “how” is the critical question?

TO BE SEEN DOING GOOD WORK IS MUST

Kulvir Singh’s first workplace mentor told him that to be successful one needs to do good work but also been seen doing good work. With that in mind, let us focus first on living our Sikhi in private (when no one is watching) and then in public (when the eyes of the world are on us). If our kehni and karni (words and deeds) are aligned, then accolades and awareness will be a natural consequence. 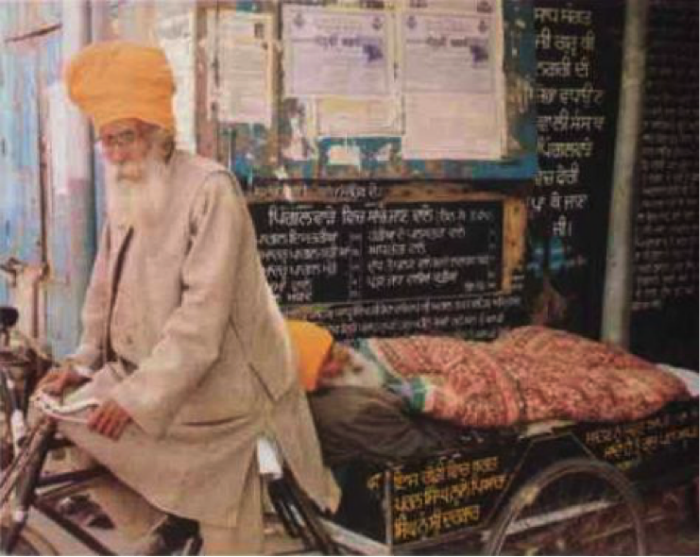 Bhagat Puran Singh, an octogenarian Sikh, carried the sick and disabled on his tricycle driven cart to their place of treatment or care center. His Sikhi was noticed very widely.