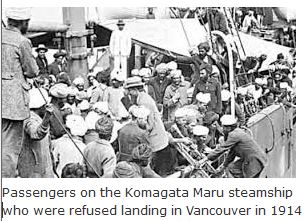 Vancouver, BC – The B.C. government will introduce a motion in the legislature tomorrow to apologize for the Komagata Maru incident.

House Leader Michael De Jong said the timing is meant to coincide with the anniversary of the arrival of the ship carrying would-be Indian immigrants at Vancouver harbour on May 23, 1914.

“This motion acknowledges the suffering the passengers of the Komagata Maru experienced as a consequence of racist attitudes of the day toward people from India and expresses deep regret that those passengers were turned away,” Attorney General and Minister Responsible for Multiculturalism Wally Oppal said.

Upon arrival in India, the passengers were detained. The British planned to send them to Punjab, and when they protested 20 were killed.

Upon arrival in India, the passengers were detained. The British planned to send them to Punjab, and when they protested 20 were killed. Canadian officials took two months to determine that only 24 of the 376 mostly Sikh passengers on the Komagata Maru would be allowed to stay. Meanwhile, passengers faced food shortages and disease on the crowded Japanese steamship.

A Day in Espanola – Interview with Kirin Kaur 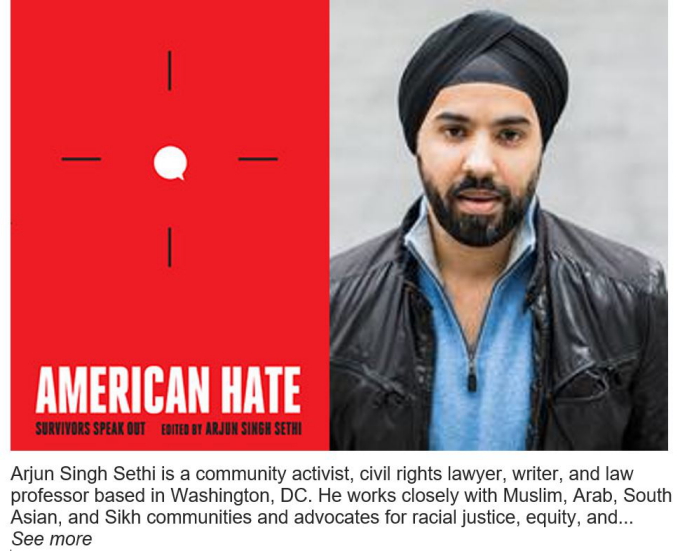 American Hate: Survivors speak out, is activist, educator, and attorney Arjun Singh Sethi’s powerful book. It shares stories of survivors of hate crimes in their own words. Acting as the collector and editor of these stories, Sethi goes to great lengths to accurately and respectfully share these brave people’s accounts of encounters with hate violence and harassment.

The book’s introduction sets the stage for the stories to follow as well as lays out the methods used to collect survivors stories. Sethi sketches out the turbulent times in the United States following Donald Trump’s announcement for his candidacy as president in the 2016 election. We learn that from the moment Trump declared, FBI reports show an uptick in instances of reported hate violence and harassment. Racists were clearly emboldened to act by their bigoted champion in Trump and the numbers support it.

The introduction does well to demonstrate that Trump and the recent uptick in hate activity is nothing new. “The United States was founded on a hate crime,” writes Sethi, in reference to the mass slaughter and enslavement of native people and American society and economy being founded on the system of chattel slavery of African people. Throughout American history, white supremacy has played a central role in its immigration policy as well as its domestic policy and economy. Donald Trump is but the latest incarnation of America’s reactionary racist core.

Story after story invites us to sit in discomfort as we listen to the survivors stories. Taylor Dumpson, the first black student president of George Washington University in Washington, DC, is greeted by bananas hanging from trees by nooses in the school quad after her successful election. Jeanette Vizguerra is the first undocumented person forced to seek sanctuary in a place of worship for fear of deportation and separation from her US-born children under Trump’s extreme immigration policy. She is subjected to threats of violence including bombing the church where she stays. Some stories are told by the family members of those who did not survive like Khalid Jabara who was murdered by a racist on his front porch.

The subject matter can seem bleak, but it is an important and engaging read. We are rescued at the end of each narrative by the survivors’ determination to struggle against bigotry. Each story ends with stories of how survivors got organized and pushed back against the tide of hate in their own communities. Sikhs should absolutely be familiar with this book as it teaches various ways that we can combat hate among ourselves and join in solidarity with other communities facing the same struggle.

I interview Arjun Sethi on this week’s episode of
The One: Conversation on Sikh History, Philosophy, and Culture https://soundcloud.com/theonepodcast/episode-12-combating-hate-with-arjun-sethi